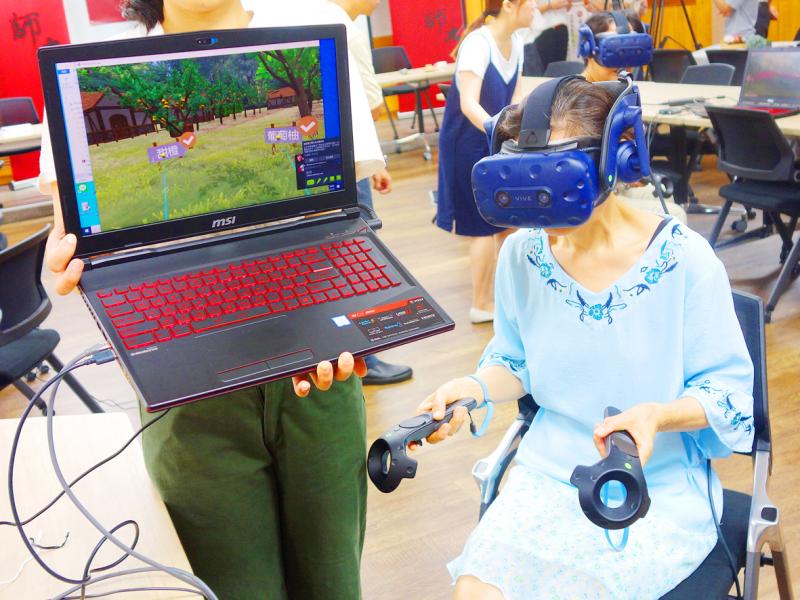 National Taiwan Normal University (NTNU) has designed a virtual reality (VR) course combined with aromatherapy to increase the well-being of elderly people, with the research results published in an international medical journal.

NTNU College of Education vice dean Guo Jong-long (郭鐘隆) on Tuesday said that the college launched the course to reduce stress among elderly people, and help address some of the nursing difficulties faced by long-term care facilities, such as insomnia and dementia.

The course allows people to play a game in which they can smell natural scents, Guo said, adding that the scents help stabilize emotions and ease discomfort.

For example, players can experience picking oranges in an orchard or collecting resin from trees as the corresponding scents are released, he said.

Feedback from people who have participated in the course showed that as the game requires them to think, it can prevent dementia, while the immersive nature scenes made them want to experience the outdoors more, he said.

Some said that watering plants in the game gave them a sense of purpose and responsibility, while others said that they like learning how to use technology, as it helps them communicate better with younger people, the feedback showed.

The course and research findings have been published in the Journal of Medical Internet Research, Guo said.

For example, when a player plucked lavender, an assistant would put real lavender under the player’s nose, Cheng said.

However, the method created delays, she said.

The upgraded version, dubbed the “VR 2.0 course,” uses a scent diffuser containing seven fragrances in front of the player.

It delivers the scent automatically when the player performs an action to trigger it, she said.

Children who lack family interactions have also taken the course, Cheng said, adding that such children often lack opportunities to experience nature, and the course instills confidence and optimism in them.

NTNU College of Education dean Chen Hsueh-chih (陳學志) said that the course is an example of the university taking its social responsibility seriously and how its achievements in academia and practical fields are helping construct a more harmonious society.