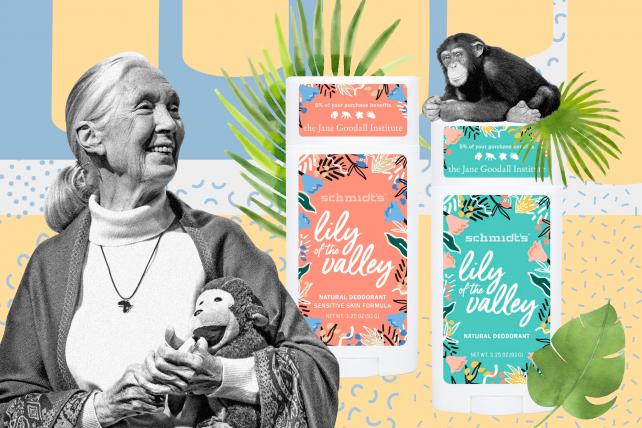 Now you, too, can smell like Jane Goodall | AdAge

By msensory team09/04/2019No Comments
How did Jane Goodall, world’s foremost expert on chimpanzees, get her name on a new scent of deodorant coming soon to a Whole Foods near you? Just luck, really.

About two years ago, Michael Cammarata, CEO of Schmidt’s, now a unit of Unilever but then a startup, got invited to a friend’s house to meet Goodall. “I heard her speak, and I was actually in awe,” Cammarata says. “I asked her, ‘What can people do to help you?’ She said she really wanted to connect with youth and get them inspired.”

Two years later, after another meeting during a Global Citizenship conference, came Schmidt’s Lily of the Valley deodorant, co-branded with the Jane Goodall Institute, which gets 5 percent of proceeds. After initially being sold direct to Schmidt’s subscribers online, the deodorant is moving into Amazon’s Whole Foods with a temporary exclusive and in-store promotion aimed at raising awareness and funds for Goodall’s work.

“Schmidt’s asked me what was my favorite flower scent, and lily of the valley has always been my favorite,” Goodall tells Ad Age. “When I was growing up there were lilies of the valley growing outside my front door, my back door and taking over my grandmother’s run of beans, and I just loved the smell.”

Fans of “Breaking Bad” may recall that lily of the valley berries can be poisonous, and used nefariously. But the Schmidt’s scent is perfectly safe, and avoiding anything poisonous is part of the deal.

“The Jane Goodall Institute picks its partners very carefully,” she says. “Their ethical values have to coincide with our own. This partnership is benefiting us financially but it’s also tying in with our belief that we should not be buying products that have harmed the environment, and we need to buy products that are ethically made where we can feel very happy we are helping the planet.”

At JaneGoodall.org, consumers can already buy a lot of licensed merchandise, including pendants, plush toys, water bottles and infant onesies and beanies, mostly created under deals arranged by Brand Squared Licensing. But this deal with Schmidt’s was very direct.

“We have to be extremely careful about who we partner with,” Goodall says, “because we don’t want to be making large amounts of money from companies that aren’t ethical and find out to our horror halfway along that in some deepest part they’ve been financing the manufacture of guns or something. These things can happen, particularly when it’s a big company. In this case, it’s very clear, straightforward and very ethical.”

Cammarata says he was bent on doing an initial public offering in 2017 when Unilever came calling, by which point Cammarata had 11 offers from strategic buyers and 38 from hedge funds. The interest came after he built his Portland, Oregon-based company in less than two years from four people in 1,200 square feet “and a turtle running around the office” to “160 people, 30,000 square feet and taking market share away from [Procter & Gamble’s] Secret and Dove.”

Unilever’s commitment to sustainability helped seal the deal, Cammarata says. And its global reach actually appealed to Goodall, because it will help with her primary goal of expanding her Roots & Shoots environmental advocacy program for youth, from 50 countries now to as many as the 129 that Unilever reaches.

Goodall, who turns 85 on April 3, says she still travels 300 days a year and hasn’t had a vacation in 40 years. Much of her work lately is focused on building Roots & Shoots.

“We haven’t inherited this planet from our parents,” she says. “We borrowed it from our children. But we haven’t been borrowing it. We’ve been stealing it. So it’s desperately important that we work with young people.”

Source: Now you, too, can smell like Jane Goodall | AdAge