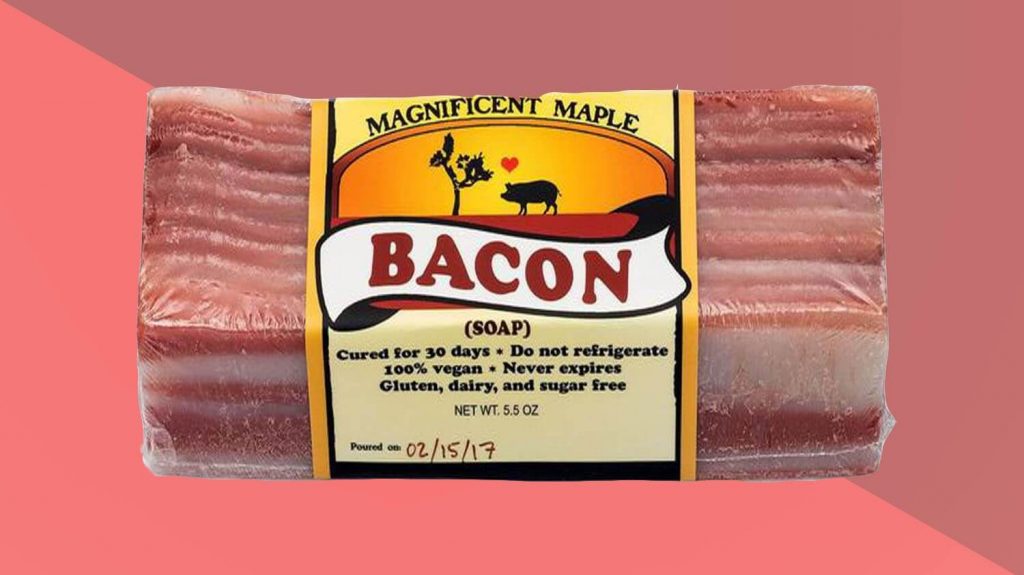 Vegan bacon-scented soap is a thing thanks to cruelty-free cosmetic company Outlaw Soaps.

The California-based brand, which also makes lotions, colognes, and lip balms, has created a coconut oil-based soap which smells and even looks just like bacon –  but without the actual pig. The soaps (which don’t taste anything like the meat, the brand stresses) were handcrafted by Outlaw Soaps founders, Danielle and Russell Vincent.

According to consumers, its the perfect gift for any current, or former, bacon-lover. “Any bacon lover in your life (we’re sure there are many) will enjoy not only the novelty of this gift, but also the practicality of it,” said one customer in a review posted on Yahoo! “It suds up and gets you as clean as any other bar of soap. Even better, it’s vegan and not tested on animals.”

Another added on the company’s website, “This bacon soap smells awesome and was a really fun gift for my husband for Christmas! The customer service is top notch and I’ll definitely be back ordering more as gifts for people next Christmas!”

Other vegan soaps from the brand include Hair of the Dog, infused with whiskey and coffee, Blazing Saddles, which according to the website smells “just like gunpowder,” and Unicorn Poop, which is made from coconut, avocado, and castor oil, and finished off with “a light dusting of unicorn fart.”

Whilst not every company in the cosmetics and skincare industry is as inventive as Outlaw Soaps, there are now many vegan and cruelty-freebrands to choose from.

Consumers are becoming increasingly concerned with where their products come from, and in particular, whether they have been tested on animals. One recent survey conducted by Perfect365 revealed that nearly half of women in the U.S. support a ban on cosmetic animal testing.

“Based on our recent user survey, data seems to suggest a large percentage of the younger generation of women are expressing concerns about the testing of beauty products on animals,” said Cara Harbor, the Director of Marketing for Perfect365. “While animal testing has remained mostly unregulated, this study shows it is something beauty brands will really need to think about moving forward to meet consumer demands.”

Source: Now Meat-Lovers Can Scrub Up With Vegan Bacon-Scented Soap | Livekindly – Adding flavour to your success