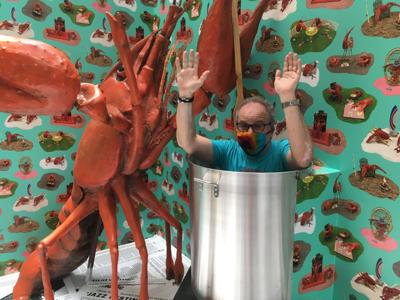 Jonny Liss is demonstrating a “Magic Mirror” in a costume-themed room at JAMNOLA, a colorful and technologically enhanced funhouse opening on the edge of Faubourg Marigny. A mirror image of his face and upper body bobs around a video screen while outlandish headdresses are projected on top of him, starting with a zebra head, a po-boy, snakes and more. When he sees a crown he likes, he has the mirror take a picture.

The Magic Mirror is one of many “virtual costuming” installations at JAMNOLA, which opens to the public Aug. 1. Such “experiential museums” have opened in other cities, and JAMNOLA is rooted in New Orleans culture.

“It’s about finding your jam, whether that’s art, music, food or culture,” Liss says. “Whatever brings you the most joy.”

With a dozen themed rooms, JAMNOLA is sort of a Willy Wonka’s Chocolate Factory tour built on local music, Mardi Gras and more. The costume room features the Magic Mirror and Carnival costume pieces, many of which visitors can pose in without touching, an adjustment prompted by the pandemic. In the Bling Bayou room, guests can sit on a gold-glittered alligator. In a music chamber, a wave of a hand in front of metal rings manipulates an electronic music-making device. One room is based on Royce Osborn’s documentary “All on a Mardi Gras Day” and features video of Mardi Gras Indians, Baby Dolls and skeleton marching groups.

Experiential museums are about sensory stimulation and have become attractions in other cities. The Museum of Ice Cream has pink-painted playlands in San Francisco and New York and their signature experience is jumping into a massive pool of sprinkles. Meow Wolf opened a neon and black-lit complex full of optical illusions in Santa Fe, New Mexico, and is expanding to other cities.

The attractions are meant for all ages, and exhibits have appeals for different generations. Teens and 20-somethings can tour with their phones up, as JAMNOLA is selfie-friendly and designed with Instagram in mind. A crawfish boil-themed room allows visitors to pose in a boiling pot or a tub with giant crawfish.

Many exhibits use advanced technology, such as the facial recognition software of the Magic Mirror. Admission also includes access to a personalized online microsite. Guests use smartphones to scan QR codes to store photos or video created at installations, and there are links for further information about artists and local culture that they can retrieve later.

JAMNOLA incorporated a large array of local artists and culture bearers. Liss and Smith enlisted the help of Collin Ferguson and Catherine Todd, founders of the local arts organization Where Y’Art, to match room concepts and artists, photographers, costume makers, musicians and others. George Porter Jr. curated music for each room. Contributors are credited for their work, and their contact info often is available. Several rooms use Mardi Gras beads sourced from ARC of Greater New Orleans, which recycles beads as a fundraiser for its programs for developmentally disabled people.

Liss and Smith were regular visitors to New Orleans before moving here several years ago. Liss started making annual pilgrimages to the New Orleans Jazz & Heritage Festival in the early 1990s and is a veteran of the Krewe of Fess Head, the fan group that gathers under a bust of Professor Longhair.

After discovering the Museum of Ice Cream and New York’s Color Factory, they started working on JAMNOLA. It originally was supposed to open before Jazz Fest, but the pandemic delayed their plans and forced them to replace some tactile exhibits. JAMNOLA always was going to have a timed-admission plan, but now groups are limited to six people per time slot. That’s less than the original plan for 15 people per slot, but Liss and Smith are happy to be a local music and art attraction that can open its doors at time when people are looking for new ways to have fun.