The team at JKS Restaurants (of Trishna and Brigadiers fame) is no stranger to garnering a following of well-heeled, ‘I-tasted-it-first’ customers. So it’s no surprise that they have enlisted the help of some high-calibre brands to partner with for this cocktail season. Perhaps the most exciting is at Gymkhana, where four new cocktails have been created around four fragrances by perfume powerhouse Penhaligon’s.

Each served with a scent blotter, the cocktails are meant to be tasted alongside the smell of their corresponding scent, and are introduced by the team (in elaborate, story-telling style) with tales that nod to life in India – from journeys through the Mahoraja’s flower garden (the Champagne Blossom paired with the Vaarda scent), to the smell of fresh rain on soil (the Rum & Rain paired with the Agarbathi scent), or ‘petrichor’, to use the technical term. 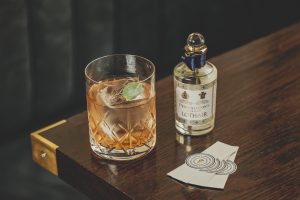 A Passage to India

Of the four serves, it is City of Joy that surprises the most. Paired with Paithani (which combines the smells of cardamom, nutmeg and black pepper), it is meant to evoke the calm of Kolkata street markets and mixes Amrut Indian single malt whisky, Buffalo Trace, apple and masala chai with the clever addition of clarified milk. The latter ingredient is what makes it so intriguing – its silky, luxurious texture is juxtaposed with its clarity and the result is something warming and clean at the same time.

But A Passage to India, which is paired with Lothair perfume featuring notes of cedarwood, wenge and ambergris (a substance produced in the stomach of whales), is perhaps the most complete for Imbibe. It tells the story of the India pale ale journey and blends Johnny Walker Gold, Cocchi Americano, pineapple and Citra hops to evoke a taste of the sea. It also comes with the instruction of our bartender to ‘first smell the perfume, taste the drink, then bite the oyster leaf garnish’ – an all-round experience which delivers a subtle taste of the sea.

When chef Atul Kochhar opened his latest venture Kanishka this year, he was joined by a head bartender who knows what he’s doing with the flavours of north-east India. Cinnamon Kitchen alumni Nick Smith has joined the team and created a cocktail menu that draws inspiration from the spices, ingredients and techniques often relegated to the kitchen.

Perhaps the most obvious – and one of Imbibe’s favourites – is the Ingrita. It comprises a shot of Durrembes Oaxaca Joven Mezcal served alongside a spiced tomato broth, made with pan-fried tomatoes, cumin, coriander, fennel, black pepper and chilli, which is then blended and left to hang in a muslin cloth. The result is a seriously smoky and spicy riff on a Bloody Mary.

The fruits of India have also played a role in Smith’s creations (he’s looking to green mango and cantaloupe for his summer menu). The Roast Pineapple Rum Punch is short and surprisingly not too sweet – thanks to the roast pineapple juice being blended with the char created during roasting. But it’s the Roast Banana Old Fashioned that topped the list for us: the banana, roasted on the kitchen’s tandoor, gave it a pleasingly thicker texture that married well with the cinnamon, pecan bitters and maple. 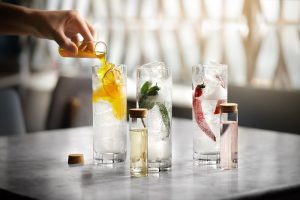 One of the menu’s headline offerings is Kanishka’s World of Imagination, which allows guests to make their own highballs. ‘I love the work that the guys at Crazy Company do, so I have worked with its founder Bruce Nagra to create a series of distillates,’ says Smith. Using a base of gin or whisky and a soda of their choice, guests can choose from decidedly savoury distillates such as black cardamom, turmeric, lapsang and ghee.

The other headliner is the 50-strong whisky list. Something that Smith has been wanting to do for a long time, it mixes spirits from Speyside, the Highlands, the Lowlands, Islay, Island and Campbeltown, to Japan, Australia and, of course, India. We hear Kochhar is created a single malt of his own in the not-too-distant future, too.