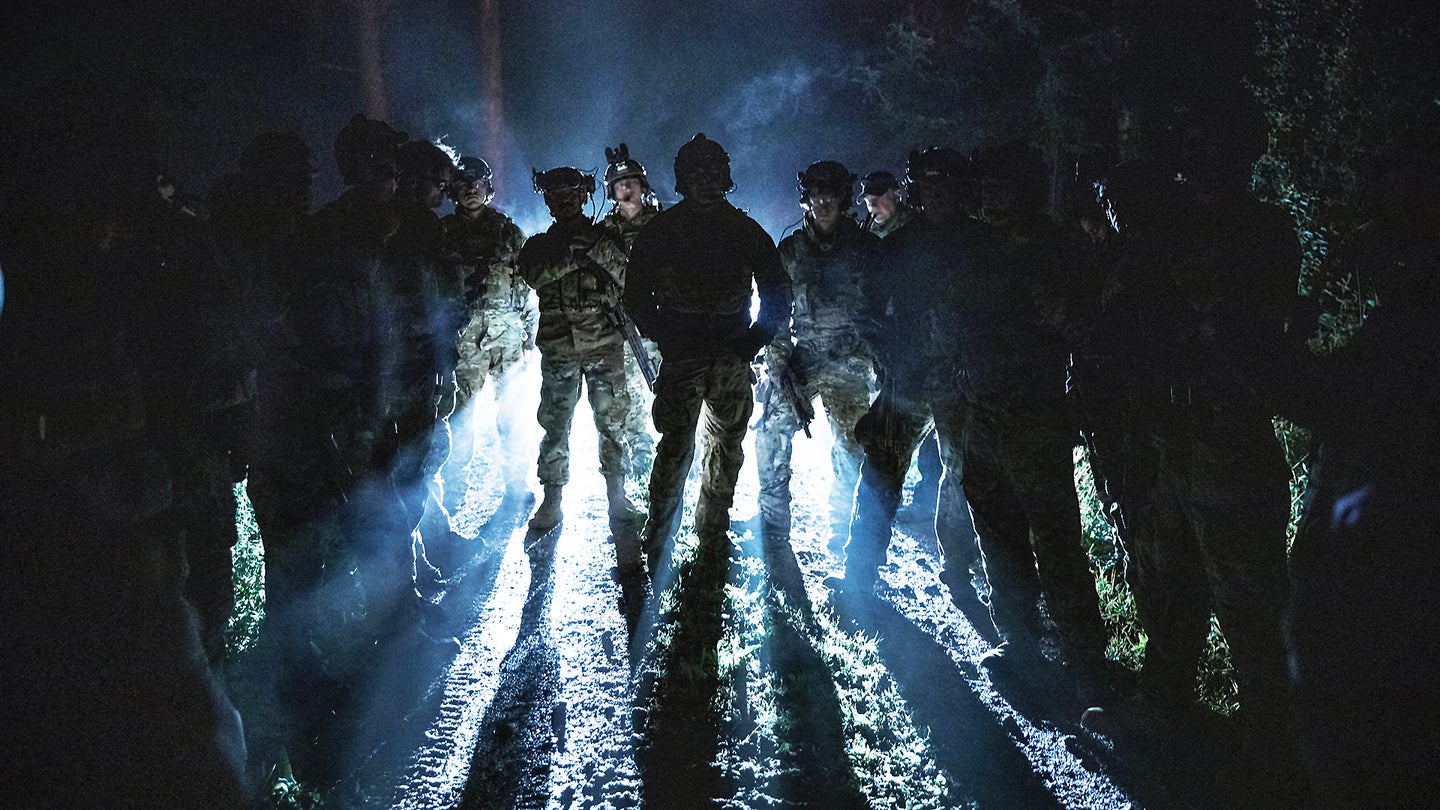 The Advanced Situational Awareness concept aims to give soldiers an unconscious “human edge” through various techniques.

The U.S. Army has published a new training circular that contains a section on how soldiers can train their senses to new levels of awareness, enabling them to almost unconsciously perceive small details about their surroundings in a near-superhuman manner. Other sections of the circular describe how cultural anthropology, the study of world religions, and even Gestalt psychology, can be leveraged in U.S. Army training in order to make soldiers into what some might call “warrior monks” with near-preternatural deductive reasoning ability.

While many will scoff at some of the loftier ideas in the training circular, the document cites numerous case studies of soldiers in the field in which a greater sense of situational awareness could have saved lives. The Army is already offering training courses in this new type of Advanced Situational Awareness (ASA) at Fort Benning in Georgia, which is home to the service’s Maneuver Center of Excellence (MCoE). MCoE oversees the Army’s Infantry and Armor Schools, among other responsibilities.

The training circular, published by the Headquarters of the Department of the Army this month, outlines a variety of techniques and requirements through which soldiers can learn Advanced Situational Awareness training methods of optimizing human performance “through building the skills necessary to develop agile, resilient, adaptive, and innovative Soldiers who thrive in conditions of uncertainty and chaos.” The document mostly focuses on ways by which soldiers can optimize and heighten their observation skills, enabling them to respond to anomalies or recognize unusual behaviors or objects that may present a threat more quickly. Using this training, the document writes, soldiers can “achieve a better understanding of their organic equipment and system: their capabilities, limitations, and components.” This heightened sensory perception “can lead to a new level of “Advanced Situational Awareness,” the circular claims, which “can be crucial to Soldier survival, as use of the sensory system provides input into a Soldier’s decision-making process.”

According to Army Training and Doctrine Command (TRADOC) regulations, training circulars “are official departmental publications that are not doctrine, but doctrine based.” The information in training circulars can range from how to train for specific events or to operate certain pieces of equipment, or even contain “detailed procedures of a technical nature.” Training circulars have no set format or development process. This latest training circular claims that the U.S. Army’s Advanced Situational Awareness training is “designed to support Soldiers’ cognitive skills on the battlefield to create preemptive decision-making over threats, thereby increasing their combat lethality.” This training should be designed “with a combat focus and an understanding of the tactical mindset,” the circular reads.

The document touches upon various facets of cognitive and Gestalt psychology, neuroscience, and even sociology in an attempt to develop ways through which soldiers can heighten their perception of their environments. The ASA training circular even recommends studies in theology, anthropology, and cultural studies as ways to better understand the motivations of human actors that soldiers may encounter in an overseas operation. Case studies are presented that highlight how better cross-cultural understanding and perception abilities may have prevented terror attacks in several overseas theaters, noting that sometimes recognizing an odd piece of debris by a roadside could have been the deciding factor in saving service members’ lives.

A heavy emphasis is placed throughout the ASA document on the recognition of anomalies, either in human behavior or in soldiers’ physical environments. “Anomalies are the changes in something that occur above or below an established baseline. Soldiers should be cognizant of anomalies or activities occurring in an environment that are contrary to the norm,” the training circular reads. “Environments are the sum of the people and objects interacting with the surroundings and reacting to external stimuli; therefore, people and objects exhibiting suspicious behaviors or patterns can impact a baseline. These impacts can cause subtle changes, which can also indicate baseline anomalies. Every anomaly must be analyzed.”

However, somewhat stranger sections of the document outline ways soldiers may be able to attune or train their sensory perception in order to respond to threats on a near-unconscious level. “A Soldier typically only uses 2 percent of the potential provided by the sense of smell,” the training circular reads. “Despite the fact that these senses are underutilized, they still provide useful target indicators. For example, cooking food, fires, cigarettes, aftershave lotion, soap, and insect repellents can indicate the presence of people.” Soldiers already depend on K9 units and the heightened olfactory senses of their highly-trained dogs for this very reason.

Currently, Fort Benning offers two courses in Advanced Situational Awareness. The base’s Advanced Situational Awareness website states that the courses will teach soldiers how “to integrate the six domains of human behavior into training and combat, and to demonstrate how they can be applied to enhance the Squads ability to achieve overmatch in a universal operational environment.”

The circular describes the soldier’s sensory system as “a valuable piece of equipment” and adds that if soldiers can heighten their sensory perception, they can “become more proactive and stay left of bang”:

Soldiers train to achieve a better understanding of their organic equipment and system: their capabilities, limitations, and components. A Soldier’s sensory system is a valuable piece of equipment. The body cannot respond to a threat until directed by the brain, and the brain does not initiate action until the senses react to some external stimuli. Becoming more adept at performing these actions can be crucial to Soldier survival, as use of the sensory system provides input into a Soldier’s decision-making process.

An eight-step training model is offered in the document. Concrete examples are presented about how to train soldiers how to recognize camouflage, differentiate between types of sources when using infrared optics, or even recognize the smell of various types of engine exhaust.

Steven Aftergood, Director of the Federation of American Scientists’ (FAS) Project on Government Secrecy, told The War Zone that while the training circular is certainly curious in some regards, it shouldn’t be taken to represent a huge shift in the ways soldiers are trained for the field. “The document is an interesting artifact of military culture,” Aftergood said. “I doubt that it represents the Army as a whole, but it will be very attractive to a certain kind of person. It portrays the soldier not as some kind of grunt, but as a near-superman with hyper-senses that can out-perceive and out-think the adversary.”

Some of the loftier goals in the ASA document are reminiscent of the “First Earth Battalion” dreamed up by Lieutenant Colonel Jim Channon. In the late 1970s and early 1980s, New Age ideas about human potential had become popular throughout wide swaths of American society, including, apparently, some in the U.S. Army leadership, such as Major General Albert Stubblebine, whose last posting before retirement was as head of the service’s Intelligence and Security Command (INSCOM). Channon dreamed up a more perfect kind of ”warrior monk” type of soldier able to “connect naturally with others at higher and higher levels of awareness and performance.” The bizarre saga of Channon and Stubblebine was chronicled by Jon Ronson in his 2009 book The Men Who Stare at Goats.

While there’s nothing in this new U.S. Army circular about staring at goats, it highlights an increasing focus on enhanced human performance throughout the DOD. The Air Force Research Laboratory is looking into ways of enhancing learning through the use of novel neurotechnologies or even maximize human physical potential by gathering revolutionary new levels of data about the human body.

Meanwhile, the U.S. Army is also looking into ways to unlock the full potential of soldiers’ brains through technology. According to the Association of the United States Army (AUSA), some researchers claim that ”cognitive enhancement could be key to ensuring soldiers are physiologically equipped for the adversary of 2050.” The Defense Advanced Research Projects Agency (DARPA) and other military laboratories have been testing methods of improving learning and memory through auditory stimulation or biofeedback, or even how to restore memory functions in troops.

“There is an enormous amount of cognitive training that can be done, tapping into the networks of the brain that can be improved, like visual processing, memory and other things, even dramatic improvements,” said Amy Kruse, a former DARPA project manager. “The mind and the body are quite connected.”

It is that mind-body relationship that ties this new U.S. Army training circular to this broader area of human performance research being conducted in DOD labs. One of the goals of the “Core Mental Skills” in the U.S. Army’s Advanced Situational Awareness circular is to “Mentally rehearse successful performances to program the mind and body to perform automatically and without hesitation.”