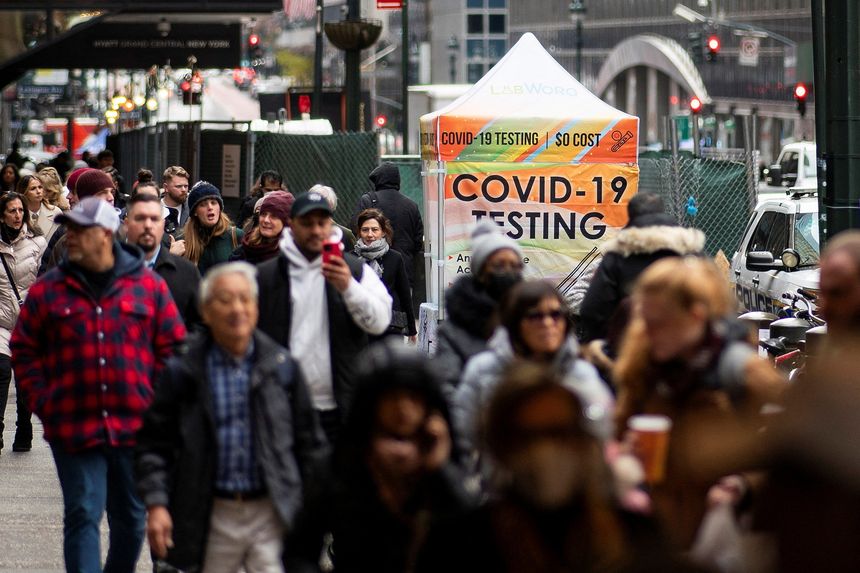 Mystery of Smell Loss After Covid-19 Might Be Solved | WSJ

Loss of smell is a common Covid symptom, though its prevalence varies depending on factors including which variant caused the infection.PHOTO: EDUARDO MUNOZ/REUTERS

Haywire immune response in the nose that lingers after infection could cause smell loss, study finds

The nose knows why some people still can’t smell long after recovering from Covid-19.

A haywire immune response in the olfactory system was found to explain why some people still can’t smell long after symptoms of the disease have abated, according to a small, peer-reviewed study published Wednesday in the journal Science Translational Medicine. In some cases, the immune or inflammatory response was detected in patients with smell loss up to 16 months after recovery from Covid-19.

Compared with people who can smell normally, patients with long-term smell loss had fewer olfactory sensory neurons, cells in the nose responsible for detecting smells and sending that information to the brain. Patients with lingering loss of smell had an average of 75% fewer of the neurons compared with healthy people, said Brad Goldstein, a study co-author and sinus surgeon at Duke University.

“We think the reduction of sensory neurons is almost definitely related to the inflammation,” Dr. Goldstein said.

Loss of smell is a common Covid-19 symptom, though its prevalence varies widely depending on factors including which variant caused the infection, head and neck specialists said.

Most Covid-19 patients who experience smell loss regain the sense within weeks of infection. But the symptom can stick around for a year or longer for up to 7% of patients, a February analysis said.

Dr. Goldstein said he and his colleagues sought to identify what was damaged or altered in people with long-term smell loss. “If we don’t know what’s broken, it’s hard to tell how to fix it,” he said.

They took samples from the nose tissue of nine patients who couldn’t smell long after Covid-19 infections and compared them with cells from healthy people. Patients with persistent smell loss had more T-cells, a type of white blood cell that plays a critical part in immune response, in their noses, the study said. The T-cells were making interferon-gamma, a substance linked to inflammation, Dr. Goldstein said, and support cells appeared to be reacting to it.

Patients with smell loss also had fewer of a certain type of anti-inflammatory cell and more of a particular inflammatory cell than healthy people, said the study of 24 patients. The healthy group included two people who had recovered from Covid-19 but didn’t have long-term smell loss.

Covid-19 researchers said the study bolstered evidence that inflammation could be a culprit in long-Covid symptoms. An April study in the journal JAMA Neurology found inflammation among deceased Covid-19 patients in the olfactory bulb, the part of the brain responsible for receiving and processing information from olfactory sensory neurons in the nose.

Neuroinflammation could be a contributor to loss of smell and other neurological symptoms related to long-Covid such as brain fog, said Cheng-Ying Ho, a co-author of the April study and an associate professor of pathology at Johns Hopkins University School of Medicine.

Dr. Ho, who wasn’t involved in the new study, said inflammation that starts in the nasal cavity could extend to the brain. She said that the new study was compelling but that its small sample size necessitated further work in more patients. Because the vaccination status of participants wasn’t collected, she said it wasn’t clear whether getting the shots played a role in the olfactory system’s inflammatory response.

“People might think smell loss is not really an important Covid symptom compared with severe symptoms such as pneumonia, but it can really bother some patients,” Dr. Ho said.

Researchers said regions of the brain linked to the sense of smell are closely associated with brain regions that control memory and emotion.

Sandeep Robert Datta, a co-author of the new study and a professor of neurobiology at Harvard Medical School, said he and others are conducting more research into the reasons for smell loss following Covid-19 infection smell loss. The research could lead to potential targets for treatment. There are no effective treatments for long-term smell loss, Dr. Datta said.

“Smell gives you a sense of place. It can be very disorienting without it,” Dr. Datta said.

Source: Mystery of Smell Loss After Covid-19 Might Be Solved – WSJ