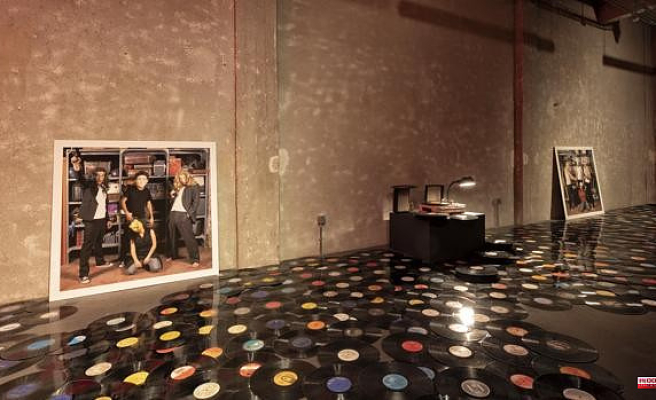 Zappa said that writing about music is like dancing about architecture, and maybe he was right. But what is clear is that music is not only heard, it can also be touched, seen and felt. Under this premise, and in the middle of the week of Music Day, Madrid has just received two new exhibition proposals in which music lovers will be able to enjoy other disciplines related to this art.

One of them is ‘Sonorama: analog resistance’, which offers until July 17 a journey through the history of objects and instruments of music and dance floors. This proposal, hosted by the Espacio Cultural Serrería Belga (C. de la Alameda, 15), is the result of the research project on analogical archeology that, for more than twelve years, has been carried out by Eduardo Balanza, an artist and researcher who he began his relationship with music “as a child, from the radio, domestic cassettes, LPs, technology and electronics in general”. Vinyls, tapes, record players, radio cassettes (or ‘parrots’ for those born before the nineties), recorders, sound installations and all kinds of devices and instruments intermingle in a large space where as soon as you enter, the visitor finds hundreds of records scattered on the floor. “The idea is that people can take the one they want, touch it, see it, smell it and put it on a record player to listen to it if they feel like it,” says Balanza, who assures that music and sound “are the origin, but also the thread driver and the excuse to delve into other issues such as identity, consumption, mass society, violence, ecology, politics or resistance to cultural impositions».

This interactive exhibition is free to enter and can be seen from Tuesday to Saturday from 11 a.m. to 8 p.m., and on Sundays from 11 a.m. to 6 p.m. Another ‘musician’ exhibition that has just been inaugurated is focused on jazz. And it is that La Fiambrera Art Gallery (C. del Pez, 7) has the honor of presenting, for the first time in Spain, the work of the American illustrator, graphic designer and artist Jim Flora with the exhibition ‘El Arte en Alta Fidelidad’, that delves into her essential and legendary work for Columbia and RCA-Victor record companies, where Flora invented her own visual language while shaping a novel medium such as vinyl record covers in the 1940s. The exhibition offers the definitive anthology of his record works, in which the artist plays malevolently with his pencils and brushes through the worlds of jazz, swing, classical music and Latin music, through covers whose protagonists, extravagant post-cubist creatures, they dance, wriggle, jump, and bounce unfailingly affected by strange mutations, histrionic grimaces, colored fur, and extra limbs. Although there is no complete official discography, we can say that this exhibition shows original folders of the vast majority of those he designed between 1946 and 1961, all of them from the collection of his biographer, archivist and expert, Irwin Chusid. The almost fifty original covers of ‘El Arte en HiFidelidad de Jim Flora’ are accompanied by thirty serigraphs, prints, and engravings of his personal and private production, published in the last two decades, many of them editions limited already sold out or tests. It can be seen until September 3, Tuesday and Wednesday from 4:00 p.m. to 8:00 p.m., Thursday and Friday from 11:00 a.m. to 2:30 p.m. and from 4:00 p.m. to 8:00 p.m., and Saturdays from 12:00 p.m. to 8:00 p.m.