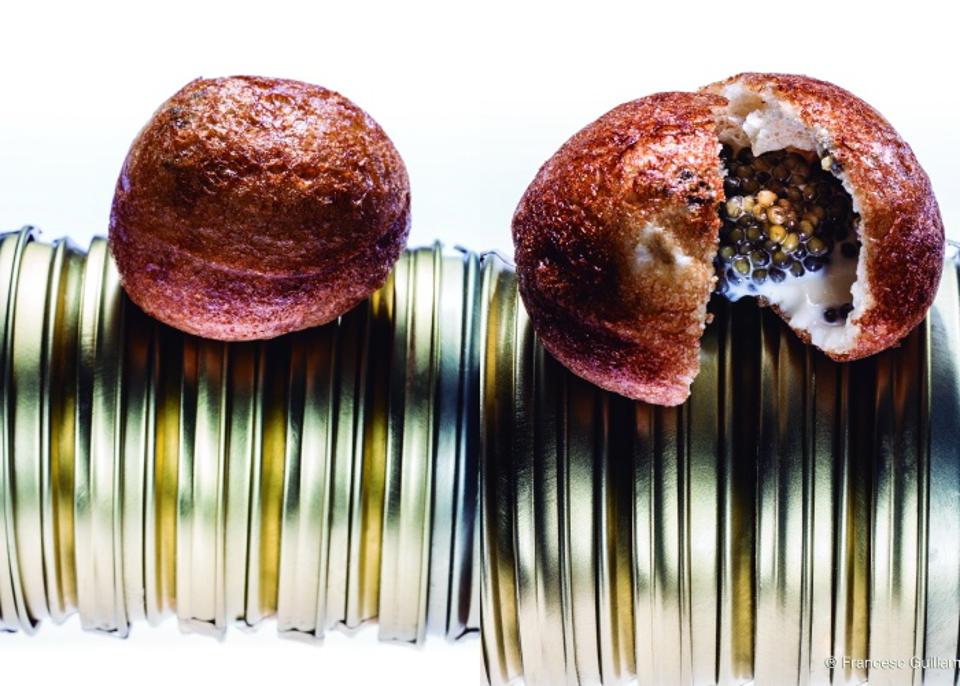 For 5 years, El Bulli, in Rosas, Spain, northeast of Barcelona on the Coasts Brava was selected by San Pelegrino, the most esteemed arbiter, as the “Best Restaurant in The World”.  Ferran Adriá was its visionary leader and chef.  Behind Ferran, on his creative team in the workshop, and in charge of executing the novel, highly inventive and delicious new food concepts and presentations in the restaurant, were three amazingly talented individuals: Oriol Castro, Eduard Xatruch and Mateu Casañas.   El Bulli closed in 2011 and Ferran has since found new outlets for his exceptional creativity and methodic innovation approaches.  In 2012, Oriol, Eduard and Mateu formed a partnership and opened Compartir (to share) restaurant in Cadequés, Spain on the Costa Brava, based on a theme of shared dishes.  In December 2014, the triumvirate opened Disfrutar (to enjoy) in Barcelona with an avant guard tasting menus of up to 32 different courses.  Disfrutar had already been named the 55th best restaurant in the world, was selected as the Miele “One to watch” in March, 2017, and this past Wednesday, received its second Michelin Star.

Eating at the restaurant in October was for me, an emotional, exhilarating, multi-sensory experience because the Harvard Business School Case El Bulli: A Taste of Innovation I’ve been teaching to executives since it was written in 2008 about the innovation methods of El Bulli that executives can apply to improve their firms’ innovation processes, transformed my life.  It’s the reason I developed a global, cross-sector, leading innovator benchmarking program, wrote a book to inspire more systematic and thorough brainstorming, speak on the subject, and why I’m now a Forbes contributor.  Despite having viewed several documentaries, Anthony Bourdain videos, and read numerous articles and books about how Ferran and his team innovated, until this October, I had never actually eaten the food…..

Two courses at Disfrutar exemplified multi-sensory innovation. We watched as apple wood was first burned in a small little pile on a dish. A brandy sniffer glass was then inverted over it to absorb the smokey essence. Next the liquid was combined with dry ice to make the alcohol smoother and then it was poured into the glass. Guests inhale the smoky essence, and then imbibe.

For one of the 7 desserts we tried, several drops of 16-year-old whiskey were poured on guests hands, to be rubbed together and inhaled, before biting into a hazelnut covered with a clear, amber-like shell that contains a liquid burst of rum, and another sweet that was a crunchy, vanilla meringue- covered almond….