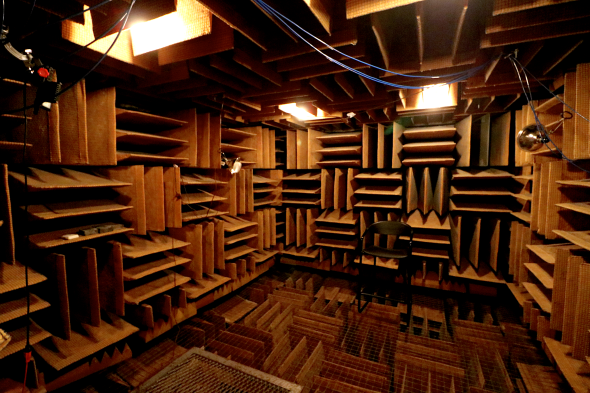 In the sleepy neighborhood of Seward, just a short drive from downtown Minneapolis, the occasional car, cyclist or pedestrian passes by a nondescript gray building, partially covered in copious ivy. Little do any of them know — or really does anyone in the city that you might randomly talk to on the street know — the building’s fascinating history as well as its equally fascinating present.

However, take a walk into the lobby and speak to a few of the helpful employees and you’ll soon begin to uncover the building’s significance.

From One Sound to Another

Currently, Orfield Labs boasts one of the quietest rooms in the world. But before the structure, which was built in the 1970s, became Orfield Labs in the 1990s, it was home to Sound 80 Studios. If that name isn’t familiar to you, perhaps you’ll recognize a few of the famous musicians who worked out of its recording studios. Prince and Bob Dylan produced work in the largely unaltered spaces, when Sound 80 Studios was known as one of the Midwest’s premiere recording studios. Sound 80 would go on to be recognized by Guinness for the creation of the world’s first digital recording studio.

But these historic rooms — now converted into meeting spaces and storage — are not the only facets of the Orfield Labs building that are Guinness World Records-worthy. 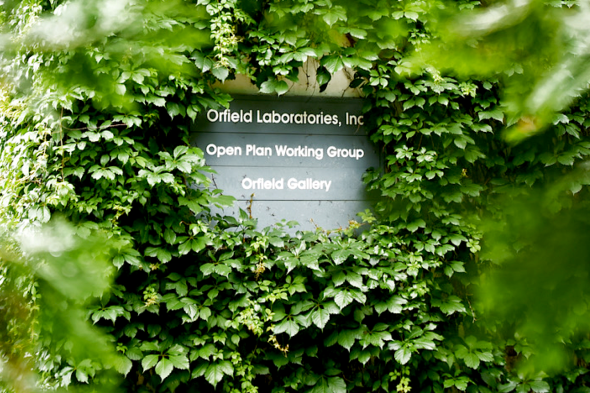 After Sound 80 moved out, the building was vacant for a period, before becoming the new Orfield Labs home. While these walls were privy to some of music’s greatest artists, they now get a glimpse at audio of a different kind altogether and, in the case of the Guinness Worlds Record-recognized room known as the “Quietest Place on Earth,” sometimes little to no sound at all.

Orfield Labs is a research facility that provides multi-sensory testing to clients from all industries. In one instance, the team might research the iconic sound of a Harley-Davidson motorcycle (described by lab manager Mike Role as that distinctive “potato-potato-potato-potato” sound — just say it out loud and you’ll see what he means), to help the brand reduce its motorcycles’ overall volume so they can be sold overseas, without losing their unique sound. In another instance, the team could use one of its three reverb rooms to test the noise of construction materials, with an aim of reducing noise transferred between neighboring rooms or adjacent floors.

A Little Too Quiet?

There’s one part of the facility, however, that’s gained interest from people all over the world, even if some Minnesotans might not even know it’s in their own backyard. The “quiet room,” or the anechoic chamber, which takes its technical name from the Latin for “no echo,” is specially constructed to absorb all sound waves. The small room, with its metal skin and rigid fiberglass, is insulated with 30-inch fiberglass wedges, encased inside of another double-walled steel cube. All of that is situated safely behind the lab’s 12-inch-thick concrete walls. 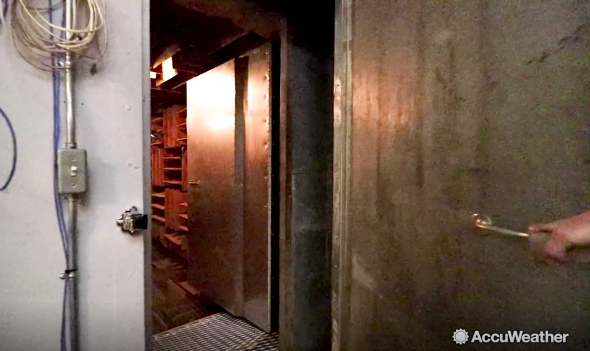 The view a visitor sees as the door to the Quiet Room is opened. Situated inside Orfield Laboratories in Minneapolis, the Quiet Room is the second-quietest place in the world and a recent stop on AccuWeather’s #GreatAmericanRoadTrip airing on the network throughout July 2019. (AccuWeather)

“The room was actually built by the Eckel Corporation in 1966,” Role explained to AccuWeather. “The room itself, on six sides, is a four-inch-thick metal wall, it has metal on both sides and then it’s kind of damped on the inside with the framing. On the inside of all six sides are acoustic wedges that are one-meter deep. The room is mounted on I-Beams on giant springs, so there are two I-beams that the core room sits on and then those springs are mounted below the beams in a pit that’s a 12-inch reinforced concrete foundation, and then around the inner chamber, we have an outer pit wall and an Over Chamber, which sits on the edge of the pit, covering the inner the chamber, so there’s an air space all the way around.”

And if you think a little peace and quiet sounds right up your alley, think again. There’s something unnerving about being inside the claustrophobic room, where no sound can get in and very little gets out. In fact, Orfield Labs will allow tour-goers to sit alone in the room, in the pitch darkness, for a few minutes, just to get a feel for it. Visitors report audible hallucinations, as their ears search for something — anything — to listen to, while others can hear their body’s systems at work, whether it’s blood pumping or sinus passages draining.

“In here, I would say [after] 45 minutes to an hour, your ears acclimate to the total quiet or that low decibel level that this room provides and you do end up hearing your different bodily functions. You can hear your fingers cracking, your bones moving, all the little things that most people don’t hear through their lifetime, you can actually hear in here,” Role said.

The original purpose of sensory deprivation experiments in rooms like Orfield’s were to test mental disruption and breakdown, particularly in torture scenarios in the context of war. However, Role assures, despite some rumors, no matter how long you stay in the anechoic chamber — or at least as far as they’ve tested it — you likely won’t go crazy or lose your mind. If you want to test that theory for yourself, The Orfield Challenge, in which you can sit in the room for as long as you want, comes with a $600 per hour price tag.

Source: Most people don’t know what’s going on behind the doors of this Minneapolis lab