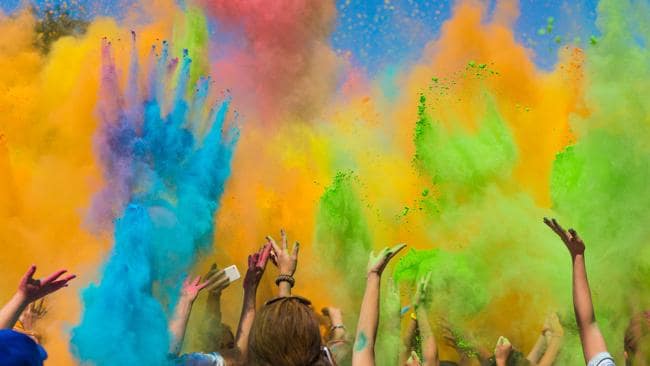 Meet the people who ‘taste’ sounds and see pain in colour

James remembers sitting in assemblies at school where he was read the Lord’s Prayer every morning. “… It had a taste of very thin crispy bacon.”

For as long as she can remember, Sarah has seen words, numbers and days of the week in colour.

The 32 year-old, who lives in Sydney, also sees pain in colour (a toothache, she says, “would be lime green”), along with songs (Ed Sheeran’s Shape of You, for example, is “orangey with black, yellow and pink flecks”).

When she was taught to read, she saw each letter in her mind’s eye in a specific colour.

“When my teacher wrote ‘look’ up on the blackboard, the ‘L’ was yellow, the ‘O’s pinky red and the ‘K’ brown. And they’ve never changed.”

It wasn’t until Sarah was around eight years old that she realised not everyone did this.

“I can remember asking my dad what colour his Sundays were, as mine were brown… I think he was a bit baffled, but said if he had to pick he’d go with green.

“But to me it was inherently brown, there’s no thinking about it or deciding.”

It wasn’t until Sarah was 17 that she first heard there was a name for what she was feeling. She was in a literature class and mentioned to someone that her words had colours.

“Soon, the whole class were discussing how weird this was and shouting random words out at me so I could tell them the colour.

“I was a bit shy about it and hadn’t realised that this was that unusual, so I looked it up online and came across [the term] ‘synaesthesia’.

“It was interesting to see it actually had a name”

According to Synesthesia Down Under, synaesthesia is when “a percept in one sense initiates or co-occurs with a percept in another sense”.

Marguerite Rowe is a member of the Synaesthesia Research Group in the Department of Cognitive Science at Macquarie University.

She says synaesthesia is a remarkable, automatic “crossing of the senses”.

For example, if a person with synaesthesia sees, hears or thinks of a letter they might experience it with an additional sensory experience such as colour, smell, touch, sound, taste, personality or gender.

She says it’s currently estimated around four percent of the population have synesthesia and that there are over 60 documented types.

A new report has now shown further light on this condition, showing there may be a genetic component.

“Brain imaging of adults with synaesthesia suggests that their circuits are wired a little differently compared to people who don’t make these extra sensory associations,” said Dr. Amanda Tilot, a geneticist at the Max Planck Institute for Psycholinguistics.

“We suspect some of the answers lie in people’s genetic makeup.”

Renae, 35, also thinks she’s had synesthesia her whole life, but it wasn’t until she was 25 that she realised she was different.

She was at a nightclub and asked the bartender to make her a drink. When he asked what flavours she liked, she said “blue flavours”.

“I said, ‘You know, that taste’s blue’. And he looked at me like I was a complete freak… In my mind I was like, ‘Hang on, how do people not know what blue tastes like?’”

She didn’t mean a blue drink like blue cordial flavoured. She wanted a drink that tasted ‘blue’ which, for her, includes flavours like milk chocolate, cinnamon and spices.

While foods taste certain colours to Renae, she doesn’t taste sounds – but James Wannerton does.

Every time he hears or reads a word, he can taste it, he said in an article from 2011.

He remembers sitting in assemblies at school where he was read the Lord’s Prayer every morning.

“… It had a taste of very thin crispy bacon.”

And that taste sensation is super real to him.

“It’s like getting an eye-dropper of taste dripped on my tongue. I get a taste, temperature and texture.”

When he was younger, James says he used to choose his friends according to whether their names tasted nice.

“If I don’t like the sound or taste of somebody’s name then I’ll try and call them something else in my head. If that doesn’t work then I can’t live with it.”

While these experiences may sound unusual to those who don’t have synaesthesia, Sarah says she doesn’t really understand what people without it experience when they read or hear music.