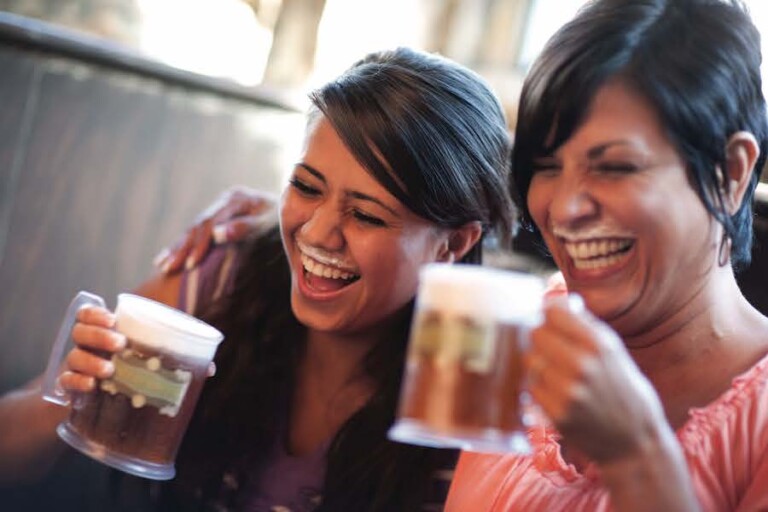 When I was younger, I remember hearing other people reminisce about their visits to theme parks, sharing stories about their experiences and how these made them feel.

Typically this would revolve mostly around the rides and how thrilling they were, or how scared they felt. Occasionally there were also stories about meeting characters, seeing shows, or loud fireworks. But rarely, if ever, do I remember hearing about the things they ate or drank during their visits.

Instead, stories about tasty and crazy sounding food and beverage experiences always seemed to revolve around visits to carnivals and big state fairs. Over the years, stories about two-foot long corn dogs, giant wads of cotton candy and frisbee sized funnel cakes slowly evolved to include a series of other unique sounding items.

Things like dipped frozen bananas, hamburgers that use donuts for buns, filled churros. Not to mention the endless list of things that always involve finding something new and unique to batter and dip into a deep fryer, like deep-fried Twinkies and Oreos.

I didn’t put it together at the time, but looking back, it’s interesting that stories about the fair always seemed to be more about what people put into their mouths, while tales about theme parks were mostly about what made people scream or laugh the most. On the surface, you might think the two experiences should be more similar. Yet how these different experiences were imprinted into memory couldn’t have been more different.

The importance of a unique food experience

Now, however, I would say that typically this is no longer true. It may have taken a few decades, but today most theme parks have realized that there was a need to step up their culinary game.

This needed to happen, and not just for guest satisfaction surveys. It has become clear that guests with happy mouths are likely to share that experience with their friends and family. Both through direct word of mouth, as well as on social media. Even more so, if the food or beverage is one that is unique to your location, not only will guests want to experience it again, they’ll bring friends and family with them and insist that they have to try it too.

If the first item that comes to mind is Butterbeer at Universal Studios, then you are not alone. Universal Orlando was not the first theme park to create an exclusive tasty treat. But they perhaps did it better than anyone else at the time.

Now, the concept of having a ‘Butterbeer’ flavoured anything has spread beyond the realm of Universal theme parks. You can Google dozens of attempts by people to home-brew their own Butterbeer creations. There are also those who suggest “hidden menu” style recipes you can take to Starbucks or Dairy Queen to make creations that may taste slightly similar, but never end up quite the same as the real thing.

It’s crazy to realize that actual Butterbeer was not a real thing until the Wizarding World of Harry Potter opened at Universal Orlando in 2010. Over the next 11 years, we’ve seen many other parks try to create their own signature food and beverage items.

On the other hand, some parks actually already had extremely popular items, and suddenly realized the value in promoting these. Dollywood’s extremely popular Cinnamon Bread is a perfect example of the latter. One day the park realized that they had been sitting on a gold mine all along.

Dollywood’s Cinnamon Bread went from being a favourite treat for the local market to suddenly being described as one of the park’s best-kept secrets that guests simply had to come and discover for themselves.

I can tell you first hand that the strategy worked because, as someone who had visited Dollywood a lot, I’ll admit I was mostly focused on the rides. I had visited for years without ever hearing about the park’s Cinnamon Bread. Then, a friend pointed it out to me as something I really needed to try.

Much like the first time that Butterbeer touched my lips at Universal, once my family and I tried Dollywood’s Cinnamon Bread, we were hooked. It has now become an almost mandatory experience. One that we have to take part in each time we visit the park.

Building a reputation for a memorable food experience

Knott’s Berry Farm is another attraction that had something special for a long time: Mrs Knott’s Chicken Dinner. In recent years, it has dug deeper and embraced the very thing that made the farmland famous: the Boysenberry.

These days, Knott’s kicks off a Boysenberry Festival with a wild menu of creations. This menu uses the Boysenberry in a variety of crazy ways, from BBQ sauces to wine, to baked goods. The latter of these is typically brought to the foreground when Knott’s rolls out a special seasonal creation, the Fun Bun.

The Fun Bun is an ooey-gooey cross between a Cinnamon Bun and a Funelcake, covered with Boysenberry flavoured frosted topping. This creation just struck the right nerve and never looked back. It has only evolved into a bigger and better version of itself over time.

Disney has struggled in this sector, despite attempt after attempt, creation after creation. They still don’t seem to have created a food experience that sticks in the public’s memory, and their taste buds.

To Disneys’ credit, they’ve got plenty of fun things to try, you just don’t hear a lot about them. Examples include the LeFou’s Brew at the Magic Kingdom and the Blue and Green Milk at Star Wars: Galaxy’s Edge. There is also a variety of other crazy looking food items in both Galaxy’s Edge and Pandora: The World of Avatar.

Of course, like Dollywood, Disney may have hit gold already with the Dole Whip and didn’t realize it until recently. Disney has also had huge success in other ways, such as the Mickey-shaped ice cream bars. Plus, Epcot stands out as a location filled to the brim with dozens of food options people love.

There may not be one single item that stands out. However, many families have made one dining location or another at Epcot a repeat part of their park experience each visit.

Other major hits from history include Kings Island’s famous Blue Ice Cream, the Pink Thing from Six Flags over Texas and the Happy Friar at Cedar Point. You could also include Coney Island’s famous Nathan’s Hot Dogs on the list. These became so popular you can now buy them in grocery stores from coast to coast.

Sometimes it may not be a particular food experience. Sometimes it’s more about the overall dining experience. This is why the old Festhaus restaurants at the Busch Gardens Parks were popular for so many years. They were a location that provided not only good food but also live entertainment. And who can forget Disneyland’s Blue Bayou restaurant, built right into the Pirates of the Caribbean ride experience?

Today there is also a lot of competition with newer items. For instance, Apple Fries at the Legoland parks, Krusty Burgers at Universal and the crazy shake trend that began at Universal’s Toothsome Chocolate Emporium. This has since been copied by many other parks, with the newest clone being the King Sized Shakes at Hersheypark.

Themed environments are also a growing trend. We’ve seen Disney push ahead with this by opening the new Space 220 restaurant at Epcot. Here, guests are treated to a simulated ride up to a space station restaurant in orbit above the Earth to dine while gazing down upon the planet.

I imagine that this is a proof-of-concept test ahead of the launch of the Star Wars Galactic Starship resort experience. This opens next year that will provide a space-themed cruise-ship simulated world to explore all day and night.

Linking happy and fun experiences to a guest’s sense of taste and smell, through food, is now of vital importance. A scientific study released in 2014 determined that there was indeed a direct link between the sections of the human brain responsible for “taste memory” and a separate area of the brain that recorded the time and place of where that “taste memory” took place.

It is believed that similar links are also in place that connect your memories of times and places to specific scents as well.

Who hasn’t gotten a whiff of something special in the air, only to have your brain flood with memories of another time and place where you had smelled it before? It could be a particular laundry detergent or cleaner making you think of your childhood bedroom, the smell of fresh baked goods reminding you of your grandmother’s kitchen, or a specific perfume that recalls your memories of a past loved one.

Theme parks are all about the creation of happy memories and experiences to last a lifetime. And there is no better way to embed these memories than to link them to the unique tastes and scents of your park. Especially if these items then become a part of your guest’s regular tradition and routine each time they visit.