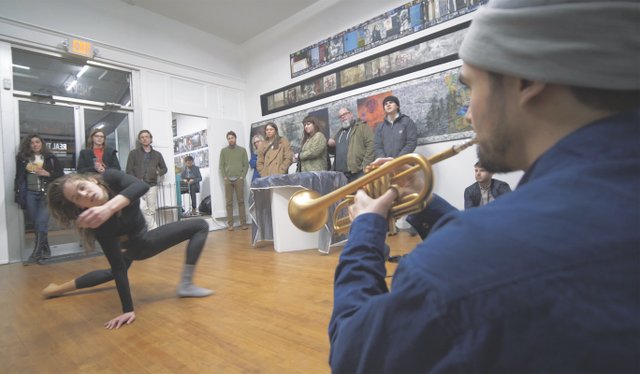 Hap Tivey’s artwork is based on Endless Events, a scroll from the Origins Project, “which maps the Universe’s scale from the smallest possible space/time dimension to the largest known scale of a discreet region of galaxy clusters.” The three scrolls wrapping around the walls are done in sumptuous rich colors and ambiguous images, using inkjet printing on silk. (The lone face staring out is the artist himself.)

The scrolls “move” through their own continuum of time and space, using images from three periods, spanning billions of years to just 16. There is the smaller Beijing scroll, which features homes scheduled for demolition in the Forbidden City. There is a dark luminosity to the images, as billions of years zoom past like a shooting star. A second scroll features the Chelsea district in Manhattan, N.Y., commenting on gentrification with the use of graffiti and advertising on surfaces.

In their own way, the scrolls are reminiscent of an artistic archeological dig. They hang above and below one another, ancient lines in a silky sediment, with millions of years buried within, waiting to be discovered. On the outer edges of this galaxy, the universe awaits in the form of larger inkjet prints on silk by Quinn Tivey. Using a similar technique as his father, Quinn creates a rectangular hanging piece of outer spaceness, an opaque blackness with dots of white and color, complemented by a similar piece in the middle of the room. Cue the smells.

So, what does the Universe smell like? Here’s your chance to find out. Topographical Universe on Silk is now horizontal, with tiny “craters” filled with white globes (actual pie weights) scented with oils. In the center lies “fossilized amber,” and a whiff will transport a visitor back to, at least, the Jurassic period. But be warned: leaning over too far over the can result in activating chaos theory. A bump into the outer edge sent a pie weight flying into space. But that’s all a part of the journey across this “Universe.”

Attention-getting. Captivating. And with a 360-degree view, much like the space above us.