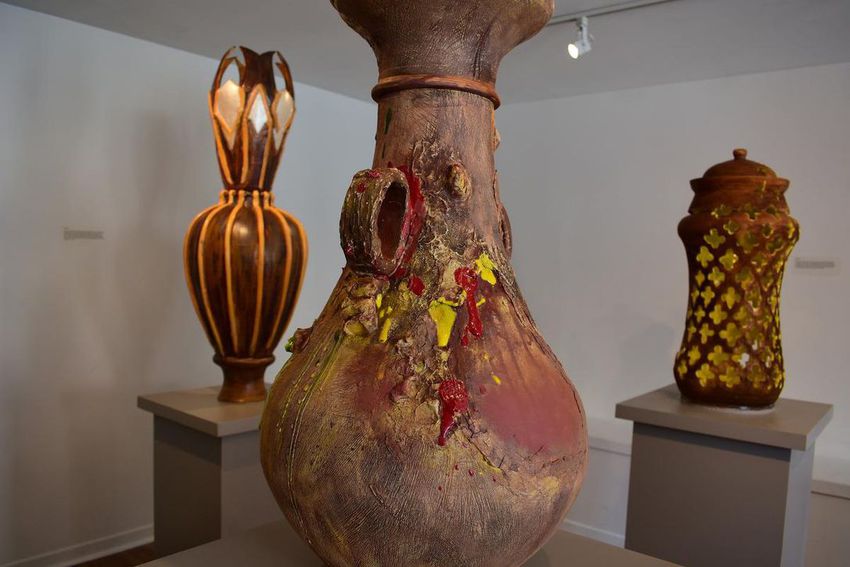 Islamophobia in a direct and sensory fashion | The Star

Kaashif Ghanie has never wanted to be an activist, yet he creates art that is inherently political, using ceramics to create a sensory experience.

“They create that sort of sensation,” Ghanie said of the pieces in his series Adaptation, which will be displayed at Hermes Gallery in Halifax until June 24.

“It’s not blatant, it’s not activist in-your-face, but through the narratives and through reading the titles of the work, it’s immersive. So you’re blatantly seeing all those things come to you, slowly but surely. As you walk around and are in their presence, you get that sensation.”

Ghanie created the series of vessels during a nine-month residency at the Centre for Craft Nova Scotia, playing off of the forms of traditional Islamic ceramic pots. Each piece has an element of scarring or mutation to demonstrate the effect of Islamophobia in a direct and sensory fashion.

“What I initially tried to do, each vessel I look at as like almost like a human being, or their own representation of one because big pots kind of command a presence,” he said.

“So I kind of look at them as figurative in some ways. So through that, they represent a human being, and each one has their own form of scarring or mutation to adapt to the climate of what’s going on socially, politically with racism.”

Ghanie, who is originally from London, Ontario, said discovered to ceramics near the end of his degree at the Nova Scotia College of Art and Design and got “hooked” on the feeling of throwing clay on a potter’s wheel.

As a child he had always been fascinated with cartoons and always wanted to produce his own figurative work.

“I wanted to be an animator when I was little. I loved cartoons, anime, etcetera. And being introduced to Islam and learning about the culture … you’re not allowed to do figuration in work, you’re not supposed to create any of that stuff,” Ghanie said.

“Self-esteem and self-contempt have specific odors; they can be smelled.”