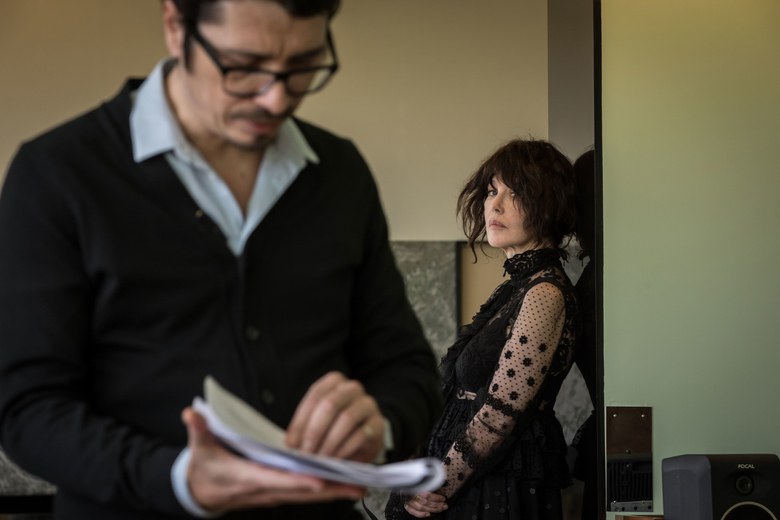 French playwright and director Cyril Teste is known for a pioneering production concept he calls “filmic performance.” The idea, honed by his Collectif MxM since 2011, hinges on exploring the intersection of cinematic techniques—shooting, editing, mixing—with live acting and some degree of public participation. Video becomes a component of theater, intermingling with sound, light and, in the case of his most recent show, scent. “Smell has a stronger effect on memory than other things,” Teste said last night following a standing ovation for the New York premiere of his Opening Night, an adaptation of the 1977 John Cassevetes film that runs through the weekend at the French Institute Alliance Française’s Florence Gould Hall. “It’s the story of a ghost,” Teste says of the show, which stars Isabelle Adjani as Myrtle Gordon, a middle-aged actress on the verge of a nervous breakdown. Trapped between fiction and reality, she is unable to connect with her role in a play as she’s haunted by the death of a teenage fan in a car accident outside the theater where she works. A tuberose-heavy fragrance, tied to both Myrtle and the deceased girl, lingers deliberately in the auditorium, pumped in on Teste’s direction through a special device. Simultaneously, his actors perform scenes of the play within a play while a cameraman films them in black-and-white, broadcasting the footage, live, onto a gigantic screen in the middle of the set.

“It’s a lot to absorb,” admits Francis Kurkdjian, the perfumer tasked with scenting the show. Listed as the “olfactory illustrator” in the show notes, Kurkdjian refers to himself as someone who “plays with scent in a different way than normal guys.” It’s an apt description. The renowned nose, who has his own maison and who has created blockbuster bottles for brands such as Jean Paul Gaultier, Parfums Christian Dior, and Burberry, has also scented the fountains at Versailles, and used bubbles as an alternative mode of experiencing fragrance. His fearlessness in expanding the confines of the olfactory arts is what attracted Teste, with whom Kurkdjian has scented another play (2017’s Festen), as well as Adjani, who is a client. “This fragrance is all about Isabelle,” Kurkdjian continues, explaining that Adjani frequently uses perfume to immerse herself deeply into a role. To become Myrtle Gordon, she asked him to make a bespoke creation that blended his fan-favorite Absolue pour le Matin, which features notes of citrus, amber, and violet, with a tuberose oil. The same scent envelops the audience as Myrtle slips further into an alcohol-fueled tailspin.

“It’s a beautiful thing because the audience isn’t totally aware of it,” Adjani says coyly of the device, which is best described as heady. But that’s part of the point. Every new burst of the almost overpowering scent creates a bout of collective Proust syndrome, meant to trigger the same memory of the dead girl that gradually undoes Myrtle on stage. It is a meta, almost maddening experience, which is why when the play wraps after an international run through the fall, Adjani plans to put “Tuberose du Matin,” as she and Kurkdjian refer to the custom scent, away for awhile. “It will take some time for me to be able to wear this again,” she admits, explaining that a single whiff can trigger very intense emotions. “But I won’t be without it for too long.”