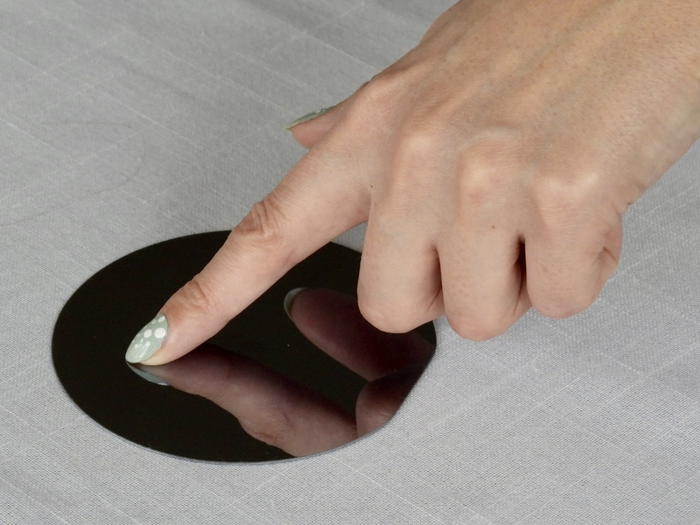 Humans can feel differences in the chemical composition of a surface

IMAGE: RESEARCH BY THE UNIVERSITY OF DELAWARE HAS SHOWN THAT HUMANS CAN FEEL TINY DIFFERENCES IN A SURFACE, DOWN TO THE SUBSTITUTION OF A SINGLE ATOM. CREDIT: COURTESY OF CHARLES DHONG

Bumps and lines make up touch-based technology such as Braille. But the human sense of touch is keen enough to detect differences that are much smaller. Research by Charles Dhong and his group at the University of Delaware has found that humans can feel differences in the chemical composition of a surface, down to the substitution of a single atom.

Dhong presented research on this at the American Chemical Society’s national meeting in San Diego on Wednesday, March 23. And he and collaborator Jared Medina, associate professor in UD’s Department of Psychological and Brain Sciences, have new support for development of higher-quality tactile aids for people with visual impairments. The $1.9 million grant, which started in February and continues for five years, is from the National Eye Institute in collaboration with the National Federation of the Blind.

Current technology recreates tactile sense using tiny motors and electricity. But the bumps and buzzes they generate are not that good at mimicking the real thing.

A new approach to controlling perception of texture could have many applications, Dhong said. It could make it possible to design new types of surfaces or provide improved integration of the sense of touch into virtual reality environments. It could also improve existing devices, such as Braille displays, or provide feedback to surgeons conducting surgery remotely.

“When you touch an object, you’re feeling its surface, and you can change how it feels by changing the friction between that surface and your finger. That’s where the chemistry comes in,” Dhong said. “We think materials chemistry could open the door to recreating more nuanced sensations, whether you’re designing a product to feel a certain way or creating feedback devices for virtual reality.”

Other human senses have had much more attention in today’s technology. Visual features are highly refined in computer monitors, smart phone screens and virtual reality headsets. Audio devices, too, recreate voices, music and other sound in high fidelity.

Progress in touch technology has lagged, in part because it involves multiple types of sensations, such as temperature and pain. In addition, some efforts to recreate touch have included systems designed to simulate a sense of moving one’s body — a complex sensation.

Dhong’s research focuses on a specific type of touch: using the fingers to detect fine textures. Some methods for evoking this kind of fine touch are already available. Your smartphone attracts your attention without sound, using a tiny vibrating device within. A refreshable Braille display for people with low vision or blindness uses an actuator to move pins up to create bumps.

This type of touch depends on a physical force — friction — which is the resistance that skin encounters as it brushes against an object. While attributes such as the contours of a surface influence friction, so does chemistry. The structure of the molecules within a substance and the properties of its surface also influence the sensation.

Dhong and his colleagues suspected that by altering only chemistry-related features, they could change how a surface feels.

In previous work, Dhong’s team asked people to touch single-molecule-thick layers of silane, a silicon-containing compound. None of the silane surfaces possessed detectable differences in smoothness.

But those who touched the surfaces could differentiate them based on chemical differences, including the substitution of one atom within each silane molecule for another, because of subtle changes in friction.

“Recent research has shown that people can detect the physical differences between surfaces at a resolution as low as 13 nanometers,” Dhong says. “Now we are saying that the sense of touch can also identify chemical changes as small as swapping a nitrogen atom for a carbon atom.”

In San Diego, Dhong presented recent work focusing on polymers, the go-to molecules for synthetic materials. Polymers are distinguished not only by their chemical formulas, but also by a characteristic known as crystallinity, which describes how neatly the chain-like molecules are organized. The polymers in these experiments had identical formulas and molecular weights. Only the degree of crystallinity differed.

In their experiments, the researchers focused on the perceived texture of thin layers of polymers. As with the silanes, they asked the subjects to slide their fingers across the polymer. This time, too, they found that people could differentiate between the polymers based only on variations in the friction resulting from subtle changes to the crystallinity of the molecules.

Charles Dhong, assistant professor of materials science and biomedical engineering in the College of Engineering, joined the University of Delaware faculty in 2019.

His research focuses on understanding the mechanical forces that shape the human sense of touch.

Source: Humans can feel differences in the chemical composition of a surface