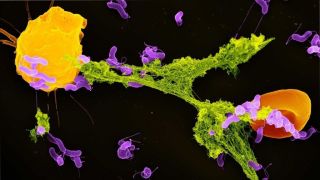 In the ultimate superhero crossover, Spider-Man-like immune cells sling webs to capture invasive bacteria and keep those supervillains restrained until Pac-Man-like cells come to gobble them up, a new study shows.

The research was conducted in mice and mouse cells, but it still may help to explain how these “Spider-Man” cells, called neutrophils, fight off infections in humans — and why they sometimes fail. It turns out, these spidey cells may not work well in people with autoimmune conditions, such as lupus, making those individuals more susceptible to staph infections, the study authors wrote.

When a staph infection first begins to take hold in the body, our friendly neighborhood neutrophils swoop in as first responders to help fight the Staphylococcus aureus bacteria, senior author Eric Skaar, director of the Vanderbilt Institute for Infection, Immunology and Inflammation in Nashville, Tennessee, told Live Science. These neutrophils have a secret weapon: They can self-destruct and eject a sticky web from their ruptured membranes. This web, called a neutrophil extracellular trap (NET), contains neutrophil DNA studded with proteins that degrade bacteria.

Researchers previously found that NETs carry chemical red flags that prompt macrophages, white blood cells that munch bacteria, to spark inflammation at an infection site, The Scientist reported. But the new study shows that the two cell types also team up to launch coordinated attacks against invasive microbes, Skaar said. Neutrophils cast their NETs to immobilize the bad guys, and then macrophages swoop in and swallow the bugs whole — not unlike how Pac-Man devours ghosts.

In their recent mouse studies, led by Andrew Monteith, a postdoctoral research fellow at Vanderbilt, the team found that some neutrophils release their NETs more quickly than others when chasing down staph bacteria. Specifically, a protein called S100A9 dictates how quickly neutrophils sling their webs. Mice with low levels of this protein seem to survive better against methicillin-resistant S. aureus (MRSA), the team showed in research published in 2017 in the journal Cell Host & Microbe.

In their new study, the researchers started to zero in on why: When neutrophils that are low in this protein encounter staph bacteria, their mitochondria — the so-called powerhouses of the cell — leak electrons and generate harmful free radicals in the cell. This, in turn, drives the cell to self-destruct and release its NETs more quickly than it would otherwise. This super-speedy NET casting boosts the ability of neutrophils and macrophages to clear staph from the body, as a germ-fighting duo, the team found.

The same held true when the team pitted the immune cells against Streptococcus pneumoniae, which can infect many organs in the body, including the lungs and brain; and they again found the same results with Pseudomonas aeruginosa, a common cause of hospital-acquired infections that can affect the lungs, bones and other organs.

People with certain autoimmune conditions, such as lupus and rheumatoid arthritis, produce more S100A9 than people without these conditions, so in theory, their neutrophils may release their NETs more slowly than average, according to Skaar. “This could partially explain why they’re more susceptible to staph” than the general population,” he said. However, the team still needs to confirm this theory in humans.

“Having it all be in mice is, of course, a major limitation,” Skaar said.

In addition to exploring this potential link to autoimmune diseases, the team plans to study exactly why S100A9 influences the speed at which neutrophils deploy their sticky NETs. Scientists could then boost the web-slinging abilities of neutrophils, to supercharge their infection-fighting abilities.

The research was described Friday (Sept. 10) in the journal Science Advances.

Source: How ‘Spider-Man’ and ‘Pac-Man’ immune cells team up to fight invasive bacteria