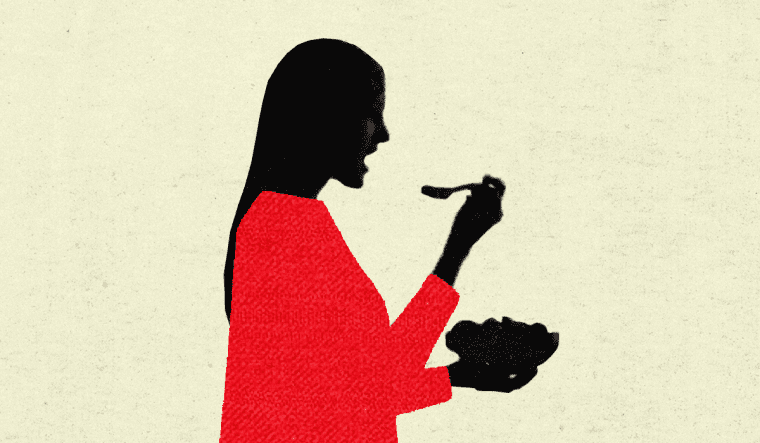 How Much Can Food Help People Heal From Trauma? | The Swaddle

French gastronome Jean Anthelme Brillat-Savarin wrote some two centuries ago: “Tell me what you eat, and I’ll tell you who you are.”

What story would the white flatbread bolani, or the nourishing fragrance of Kabuli Uzbek pilaf, tell Brillat-Savarin today? It may be one of strife, as the Afghan conflict unleashes colossal cultural trauma. It may also be one of memory and longing, as people use their culinary traditions as a way to retain connection. Sadia Badiei, a YouTuber of Afghani heritage, found herself digging up recipes she grew up with, like Aushak (Afghan dumplings) and Banjan (an eggplant dish). “I believe that there is no better way to forget about our differences than through food,” she said in a video.

The ritual of eating exists on an emotional plane; its foundation is held firm by memory, identity, and affection.

Food rituals are intergenerational, just as trauma is. So perhaps traditions of eating hold the key to healing emotional injuries.

As for many others, the Covid19 pandemic and lockdown brought isolation and a compounded cycle of depression for Monica Gyamlani. While stuck in the U.K. doing her master’s, “Dal Pakwaan was my fix,” she says. “The process of making [dishes] helped me work that alienation/trauma out of my body by way of engaging with food.”

Like peeling an onion, addressing trauma through food is a sensory experience at every new layer.

Physiologically, studies tie the sense of smell most closely to memory, with taste coming in a close second. The touch and texture of food further amalgamate these senses and links them to comforting nostalgia.

Researchers have noted how holocaust survivors spoke of happy associations with bread. During a genocide that starved people, bread was the most accessible option and thus became an undulating symbol of survival. On Jewish holidays and Shabbat, the baking of the Challah bread remains a symbolic gesture of healing as a community for many survivors. “No matter how many twists and turns [in the lives of people] in the end, they all come back together for healing,” Monica Welsh of the Glazer Institute noted.

“Because food memories form without any conscious editing, they take on all the attributes of the situations in which they were acquired,” Susan Krauss Whitbourne, a Professor Emerita of Psychology, told BBC Travel. These visuals vanish into memories like apparitions, but food is a powerful agent to evoke them, a gastronomic déja vu of sorts.

Ask Vaibhav how delicious Nemona is, and he will wax rhythmically about the flavorful gravy. There’s nothing unconventional about this mix of peas, cumin, and garam masala; yet, it evokes a distinct memory of a leaky roof, a tight space, his family eating together. “I clearly remember the abuse and toxicity in my joint family’s ancestral home,” the 22-year-old says. But when his family served food, no one shouted, a semblance of peace prevailed.

“Food gave me refuge from it.”

The most vital caregiving rituals — between friends, lovers, family — grow around food preparation and sharing. In The Year of Magical Thinking (2021), author Joan Didion remembers a stream of lasagna, pasta, and other “comfort food” that friends and relatives dropped at her house. The food could not counter the grief of her husband’s death, but it acted as a reminder that her people still loved her.

Similarly, the Irfan Khan-starrer The Lunchbox (2013) explores the relationship between Ila, a young housewife whose husband has an affair, with Saajan, a man who recently lost his wife and is about to retire. Ila and Saajan have never met, but the dabba between them– often packed with dal, paneer kofta, grape raita, and a note, becomes their medium of love.

As an action, cooking carries a patina of tranquility. People often describe it as a meditative ritual and the kitchen a thinking space. Especially during the “Covid19 lockdown, a lot of people found therapeutic value in cooking,” Simi Malhotra, a professor of cultural studies, tells me. Any act of food preparation is a creative endeavor, and its connection with relieving stress is well-studied. Food’s proximity to the body and its omnipresence in everyday life explains this dynamic.

When Shubhra Chatterji’s grandfather passed away due to a heart attack, her mother found solace in the act of making mooli ke paranthe. But the wheat flatbread, stuffed with radish garnishing, surprised no one. His love for mooli was storied. So, Shubra feels making paranthas on his birthday “has helped her [mother] heal.”

In a cultural sense, trauma accumulates as a response to conflict, oppression, and displacement. Lisa Cromer, an associate professor of psychology who has studied the connection between food and memory in the context of loss, notes that “exploring, revisiting, and reconnecting with food traditions and oral food narratives could be an additional way of healing from historical trauma.”

Healing from cultural oppression requires recognizing and understanding historical trauma to overcome it. Since we tie food to the memory of social identity, it becomes a response to trauma. Any trauma, individual or cultural, heavy or slight, alters one’s sense of identity. People often pursue their lost selves via food rituals.

A 2018 study noted people proved more resilient in the face of trauma when their social identities felt intact. “When people travel across thousands of miles, they carry food and their food identity with them. So familiarity, comfort are key elements here,” says Malhotra. Eating is one of the most important ways of connecting with one’s community.

“In a country that felt so alienating, the comfort I found in the food I cooked and the familiarity in its taste made me feel a little less uprooted,” Monica says.

Shubhra wholeheartedly agrees. She’s half Punjabi, married to a Tamilian, born in Gujarat, lived in Maharashtra for 20 years, and now lives in a small village in Uttarakhand. “What’s on my plate faithfully conveys my identity,” she says.

Shubhra’s maternal family fled British-ruled Pakistan in 1947. They left everything behind, not a single photograph to signify their identity or heritage. “The only thing they brought with them were the recipes we still make in our home, typically Lahori, Punjabi recipes,” she notes. It is through food that their identity––once blown apart by trauma––still lives.

As with Afghan food, the Iranian culture has also used its cuisine to tell stories of loss and trauma. The cultural legacy of Irani cafés in India — steeped in the aroma of maska bun, chai, and berry pulao — attaches itself to the identity of the Iranian community. “The cafes are not just restaurants, but cultural spaces where the Iranians have preserved their collective memories of Iran in the form of newspaper cuttings, flags, family photographs….” Aakriti Chandervanshi noted in Sahapedia.

Food as a force of recovery carries a lot of hope. Sudershan Devraj, 27, was 10 years old when the 2004 tsunami hit Puducherry, Tamil Nadu. He remembers how everything disintegrated into a heap of dust. “Where I found hope,” he says, “was at the gurudwaras, which served lunch and dinner for more than a month. People gathered in the open space — out of necessity, fear. They were feeding anybody and everybody irrespective of class, creed,” he says. “[Sewa] helped in every way possible.”

Resistance on a plate

If food is a marker of identity, its rituals pave ways to amplify cultural oppression. This is gendered (as families exist in a primarily patriarchal space); in Vaibhav’s family, her mother could cook non-vegetarian food for others but was never allowed to eat it herself.

For Dalit and other oppressed communities, food options developed not out of choice but necessity. Caste hierarchies and untouchability deliberately denied communities access to nourishment, compounding the grief of oppression. In his essay Cultural Studies and the Culture of Everyday Life, John Fiske noted, “The social order constrains and oppresses the people, but at the same time offers them resources to fight against those constraints.” Food sits at the heart of this.

The preparation of rakti (coagulated animal blood with onion and oil) or chunchuni (sun-dried pig skin that could last for months) in some Dalit communities from Western India is telling of their resistance to these hierarchies. “Meat eating in itself, by its subversive and subaltern nature, is an act of social and political unrest,” Kshirin Rao Eshwara noted in Medium. These eating rituals subvert power dynamics, becoming “a source of contestation, coercion, resistance, subversion, and negotiation,” notes Malhotra.

Inside the ongoing farmers’ protest site on the outskirts of Delhi, the fragrance of butter, milk, and jaggery hangs in the air. Big cooking stoves flank highways and campsites. Srini Swaminathan, who spent days volunteering at the Singhu and Tikri border, says, “The first thing they asked me was not my Aadhaar card or name or anything else… but ‘have you eaten?’ ‘Would you like something?” He was presented with carrot halwa and flavored hot milk before he could answer.

With these acts of feeding, protest grounds become a colosseum of healing. In the face of all the pain, there it was, the antidote – food as love.

Source: How Much Can Food Help People Heal From Trauma? | The Swaddle

“In the music I was composing I was trying to express my emotions, my so called negative emotions, which were depression, anger and so forth.”