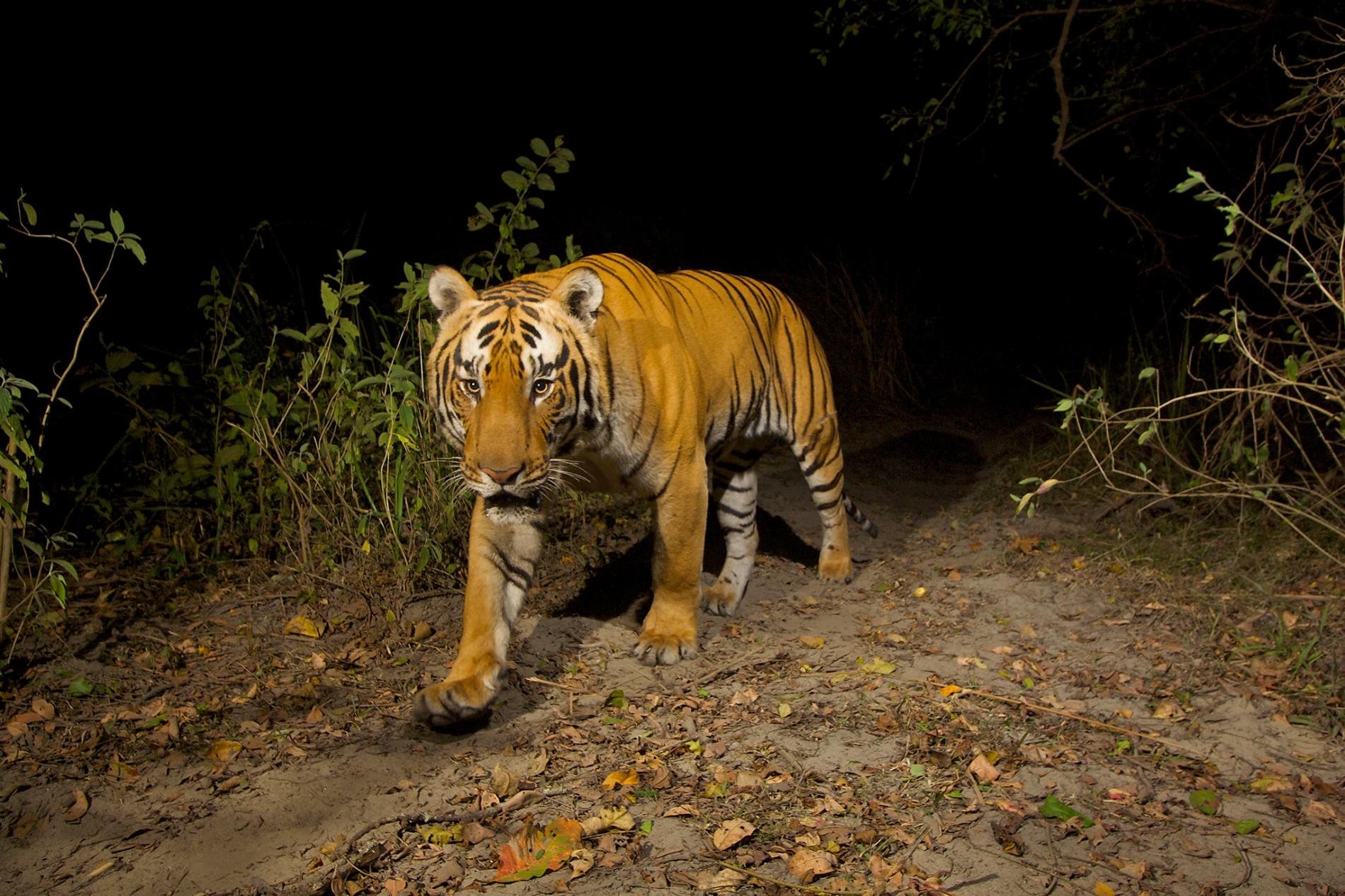 How humans are hijacking scent, the universal animal language

From repelling pests with coyote urine to luring big cats with cologne, humans are using odors to influence animal behavior.

THE VILLAGERS OF Maharashtra state held their breath as the body count climbed.

Animal activists knew her as Avni. The Indian government called her T1. But no one knew quite what to do with the tiger, the mother of two cubs who was blamed for 13 mauling deaths in two years.

The Indian government deployed a small army to bring Avni in. Hundreds of foot soldiers, infrared drones, paragliders, snipers, and elephants combed the jungle fruitlessly for nearly two months. By October, with wiley Avni still at large, it was time to break out the big guns, the final line of defense, the Hail Mary. It was time for Obsession for Men. The cologne by Calvin Klein.

Musky colognes like Obsession tap into an invisible system of animal communication—the information superhighway of scent. Urine, musk, and other excreta can serve as a stinky form of “message in a bottle” to the next animal that comes sniffing, providing crucial information that they use to navigate the world.

Some humans hope to crack the code, and to start leaving our own smell-messages—like Obsession—to purposely influence the behavior of animals fluent in the language of the nose. And that smells like trouble.

Blindness and deafness are considered disabilities—but what’s the word for someone who can’t smell?

Humans give scent—arguably the most primal of the senses—short shrift. We outsource our sniffing jobs to canines and do everything we can to suppress our own bodily odors. But from scent alone, humans can identify individuals, assess the relatedness of potential mates, and detect illness.

On a conscious level, we’re overwhelmingly visual creatures, so it’s easy to overlook the olfactory landscape—a whole plane of sensory information. But for many animal species, scent is as important as sight and a primary means of communication.
Scent markings work as animal billboards—at the most basic level, they say, “I’m here.” Depending on the sender and the recipient, that can be read as “come find me” or “stay away.”

These messages can be left intentionally for members of the same species—tigers like Avni deposit scent markings to draw territorial boundaries for rivals nearby, while female pandas rub their butts against trees to leave a ‘come-hither’ smell for males when they’re sexually receptive.

Other scent marks are inevitable—everybody poos—and reveal information competitors can easily exploit. Carnivores track rodents by following a breadcrumb trail of feces pellets, and predators like Avni might as well send up a signal flare for prey animals whenever they urinate.

As human populations increase exponentially and wild places shrink, animal-human conflict is on the rise—and with it the demand for products to control animal behavior.

There’s a whole industry providing natural and synthetic animal smells—from bottled bobcat urine to “ground, aged and preserved otter glands, ”it can all be yours, and with free shipping to boot.

Some scent-messages are easy to hijack. Every deer hunter worth her salt knows a bottle of doe urine will bring bucks running to the stand, and since deer don’t have the most discerning palate, a homemade brew of urea, ammonia, and water is close enough to do the trick, according to hunting websites.

We know how to attract animals—baiting with food, like fresh meat or a salt lick, is a historical favorite—but animal deterrents are harder to come by. Products like Shake-Away DEER claim that powdered coyote urine can conjure the odor-ghost of a coyote to patrol your garden and discourage would-be nibblers—but experts like Michael Parsons, behavioral ecologist at Fordham University, say we shouldn’t bet the farm just yet. We haven’t decoded the whole message.

But after compiling the results of more than 170 studies for a smell state-of-the-union published in Biological Reviews, Parsons marvels at how ignorant we still are of how to read scents. “It’s almost embarrassing,” Parsons admits. “Exciting, but embarrassing. We’re just beginning to find out how many variables are involved.”

Parsons points to his own research experience in Australia, where kangaroos outnumber humans almost three to one and are considered a pest species, “like rats in New York.” Kangaroos don’t have many natural predators—“I mean, these animals are six feet tall and built like Schwarzenegger”—but Parsons observed that the majority react fearfully to scents from dingos, wild dogs that travel the country in packs.

Parsons’ colleague Ken Dods developed an artificial scent dingo scent, a time-release gel that scientists hoped could be used as a broad-scale deterrent for kangaroos. The result couldn’t have been farther from their intention. “The kangaroo bucks were responding angrily to it,” Parsons laughs. “They were trashing the area around it.”

The problem is that would-be Pied Pipers are looking for the short version of smell messages—the “come” or “go.” But it’s impossible to convey that information without getting the context right.

Scent markings are made up of dozens, if not hundreds, of volatile chemicals. Canid species like dogs, wolves, and dingos have between 90 and 180 of these in their urine, according to Parsons—all conspiring to create the smell that reaches the nose.

Each chemical doesn’t just add to the positive or negative valence of the overall smell—good or bad, come or go—they can also provide layers of information to the right sniffer. It’s a laundry list of variables: individual identity, sex, social ranking, clan or pack membership, relatedness, health, reproductive status, and even how hungry the animal is. Those are just the ones we know of so far, Parsons emphasizes.

It’s easy to get that context wrong when mass-producing animal scents. Apart from ethical concerns, harvesting urine from animals in captivity is full of pitfalls. Take the example of a coyote—prey animals like elk find scent markings from dominant animals frightening, while scents from subordinates and females may not break their stride. Does that mean captive coyotes need to be housed in a group setting to get the mix right in their urine? And since diet is such a defining factor in the, uh, content of excreta, how close to “natural” does it have to be for the scent to work?

We understand the general shape of how these odor messages are supposed to look. But the lives of scent-dependent animals literally depend on having the trained nose of a urine sommelier. Fabricating artificial scent messages is like trying to forge a Van Gogh without even knowing which colors were used.

Even if you get all the animal-side variables aligned, chemistry does not work in your favor. As soon as the scent leaves the body, everything from differential evaporation to weather conditions begin to degrade the scent. That’s how rabbits can tell when the big bad wolf was in the area, which indicates just how concerned they should be. So that stale, long-bottled fox urine may not be enough to spook the chipmunks into the neighbor’s yard.

“If you find a scent that works, you have to freeze-frame it on the spot,” Parsons explains. “By the time you store it in the lab, it may degrade and be very different.” In fact, the very act of freezing a pheromone for transportation or storage has been demonstrated to alter behavioral responses.

Of course, none of the above matters if you’re trying to pull the wool over the nose of a particularly clever animal. Like Avni.

In the early days of Obsession for Men, the cologne by Calvin Klein, its signature musky odor was scraped directly from the butts of captive civets. Thankfully for the civets—and better for Calvin Klein’s PR department—there’s a synthetic mimic manufactured from palm oil available now. Calvin Klein hoped to tap into the primal desires of women—but it turns out his cologne resonated with a much larger demographic.

John Goodrich, chief scientist at big cat conservation NGO Panthera and director of the Tiger Forever program, remembers the first time he saw a cat catch a whiff of Obsession, on a tour of the Omaha Zoo more than a decade ago.

“They’d go crazy, they’d be rubbing up against it,” Goodrich recalls. “They would come up to the bars wanting it sprayed in their face.”

Conservation researchers at the Bronx Zoo identified Obsession as a promising candidate for luring cats to cameras for wildlife surveys. “These big cats would wrap their arms around a tree and just vigorously rub up and down,” Pat Thomas, then the Bronx Zoo’s general curator, explained to National Geographic in 2010. “Sometimes they would start drooling, their eyes would half-close—almost like they were going into a trance.”

Goodrich was eager to bring Obsession to the rocky Sikhote-Alin mountain range of Russia, where he hoped to gather more data in his study of Siberian tigers. “I thought, wow! This is just what we need,” Goodrich remembers. “We’re going to catch tons of tigers now.”

But the words of one particularly strange Obsession commercial from 1985—“Was it me? Did I somehow drive her away?”—would prove prophetic. “We were just better off putting the camera traps in places where tigers normally went and were scent-marking themselves,” Goodrich explains. “The tigers in Russia either avoided it or just didn’t care.”

Some field researchers swear by Obsession. Miguel Ordeñana, a biologist at the Natural History Museum of Los Angeles, credits the cologne with increasing traffic around camera traps for jaguars in Nicaragua. He suspects the cats interpret the scent as a territorial marking from rivals—so why weren’t the Russian tigers intrigued?

Scientists speculate that cats react differently to Obsession and other musky colognes based on prior experience. Naïve cats like captive-born leopards and tigers are nearly always interested in novel stimuli—enrichment treats from zoo keepers tend not to be dangerous—whereas wild cats may interpret a mysterious new smell as a red flag to be avoided.

What’s more, a cat’s response may also depend on how closely civetone (the chemical dupe in Obsession) resembles the chemical structure of their own scent markings, which vary considerably across species.

Despite Obsession’s mixed track record, ideas were running thin and tensions high in the hunt for Avni back in India earlier this year. A woman had been accidentally crushed by one of the elephants involved in the search party. Cologne was worth a shot.

The plan was to tranquilize Avni and her two cubs for assessment by a vet and possible relocation to a rehabilitation center or release into a more sparsely populated area. That was best-case scenario. But after much debate, India’s Supreme Court had also given wildlife managers carte blanche to “shoot to kill” if the situation turned violent.

If the team could distract Avni for long enough with Obsession—the zoo record was 11.1 minutes—the tranquilizers might have time to kick in, and Avni’s life could be saved.

But it was not to be—Avni didn’t take the bait. “She was too clever for the cologne,” said Asgar Ali Khan, a business management graduate controversially tapped to lead the hunt. “We were dealing with an extraordinarily smart tiger.”

Nawab Shafat Ali Khan, a renowned tiger hunter and Asgar Ali Khan’s father, explained to the New York Times that he was convinced Avni would never be taken alive. “She has learned from all these botched capture operations. We’ve made her very smart. Brilliant, actually.”

Just days later, on Friday November 2, Asgar Ali Khan would shoot and kill Avni in what he described as self-defense—though autopsy reports counter that narrative. Animal rights group across India have decried the killing as a flagrant violation of the law.

The tiger’s case is a high-profile example of how scent is creeping into the mainstream in wildlife management. Though cologne couldn’t save Avni, scientists like Parsons remain optimistic that artificial scent messages will one day help resolve conflict peacefully when animals and humans clash—though replacing fences with feces may be a hard sell at first.

Source: How humans are hijacking scent, the universal animal language