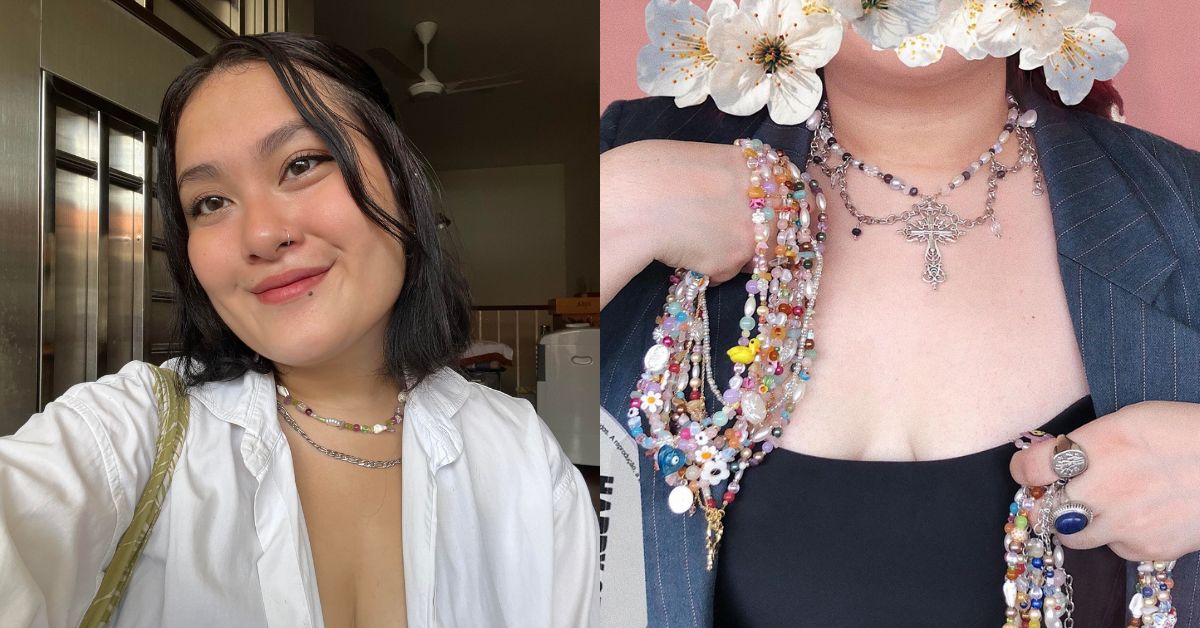 By msensory team30/11/2022December 2nd, 2022No Comments
When Chloe Lloyd Liew listens to music, she’s not just taking in the beats or the lyrics or the singer’s voice. Rather, Chloe sees bursts of colours whenever she listens to music, and has been able to do so ever since she could remember.

In simpler terms, it’s when someone feels sounds or tastes shapes, or in Chloe’s case, hears colours.

“Just imagine a splatter of paint coming across your face, over your vision kind of thing,” Chloe explained. “It’s more on the melodic sounds and composition.”

Perhaps this ability of hers influenced her decision to pursue contemporary music and music technology, but it definitely plays a crucial part in her part-time jewellery business, The Naked Beads.

Jewellery-making is her way of expressing herself

Before the pandemic, Chloe would work part-time in an independent jewellery store that would travel between flea markets and bazaars.

But because of the pandemic, she was out of a job as the jewellery store was reliant on events.

Her parents also faced similar struggles. With her dad as a film director and mum as an events manager, many aspects of their jobs were put on hold.

“Eventually, I just took the initiative and stepped up to create something that could potentially fund my family and my university as well,” Chloe shared.

This resulted in the start of The Naked Beads, a jewellery brand that specialises in accessories that are inspired by movies, TV series, and music.

Adding her own colour

Chloe has used her synaesthetic capabilities of hers to create music-inspired jewellery, having made necklaces for songs such as ABBA’s Voulez Vous, Mamma Mia, Honey Honey, and more.

“I wanted to channel and use the ability [of synaesthesia] through my craft and let people wear it and bring it to life,” Chloe shared.

For character-based pieces, Chloe focuses on what the character wears, or watches the movie and TV series to analyse the character and how they behave.

She’s designed necklaces inspired by Marvel superheroes, Harry Pottery characters, and even ones from The Queen’s Gambit.

“Before I actually design my necklaces, I take about 10 to 15 minutes of meditation just to clear my mind and make sure there are no excess thoughts going through my head,” Chloe said.

The uniqueness of her business has allowed The Naked Beads to actually contribute to her family’s financial stability in terms of daily necessities.

True to her words, though, Chloe has continued to harness her creativity and make unique jewellery pieces through The Naked Beads even after pandemic restrictions were lifted.

She still actively posts her necklaces on her Instagram page, with her latest drop being the Midnights series, based on Taylor Swift’s recent album.

Her pieces are typically priced around RM40 to RM60 and are sold on a first-come, first-served basis.

“Just because my parents are back at their jobs doesn’t mean I’m going to stop completely because it really makes me happy,” Chloe shared. “It’s something that I really love to do.”

This interview was done as part of a previous Vulcan Post video series, Pandemic Born.

Source: How an ability to “hear colours” helped this M’sian crafter sustain her family & studies