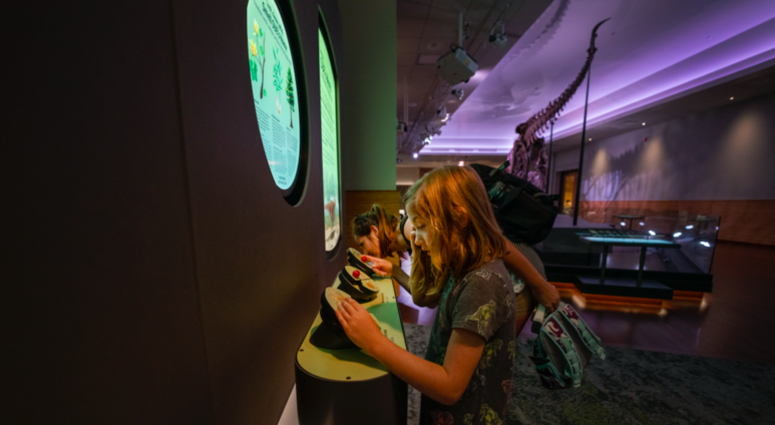 Get A Whiff Of SUE The T. Rex’s Breath & touch her skin too | WBBM-AM

By msensory team02/10/2019No Comments
CHICAGO (WBBM NEWSRADIO) — The Field Museum is welcoming guests to experience SUE the T. rex like never before!

Guests will be able to get a whiff of SUE’s breath, watch the T. rex walk through the Late Cretaceous forest, hear their subsonic rumble, and feel the texture of a T. rex’s skin.

“We’re excited to get visitors closer than ever to feeling like SUE is there and alive in the room with them, using their senses to answer questions about the T. rex’s life,” said Meredith Whitfield, Exhibition Developer at the Field, in a statement.

The Field Museum welcomes guests to get up close and personal with SUE and learn more through the new, scientifically vetted sensory stations. Guests can use their sense of smell, taking in “the sweet scent of the Cretaceous forest or wincing at SUE’s post-meal stench.”

In order to create these smells, the Field Museum’s own collections manager of paleobotany Az Klymiuk analyzed fossils found at or near SUE’s dig site, finding modern-day analogues. From there, a team worked with the Chicago Botanic Gardens to fine-tune the scented oils featured in the smell station, the museum said. The scent for SUE’s breath takes into account that the T. rex’s teeth would hold onto flesh and cause an unpleasant odor.

Guests can then use their sense of hearing, to hear SUE’s subsonic rumble. According to the museum, research suggests T. rex noises sounded most similar to a crocodile rattle or a bittern, a type of bird; therefore, the museum took recordings of these noises and scaled the pitch to a body of SUE’s size.

“Visitors will not only be able to hear the deep rumbly tones, but also feel them as well, thanks to bone conduction technology that lets visitors touch hotspots on a platform,” the museum said in a statement. “This makes SUE’s world more accessible for those who may have hearing impairments.”

And finally, guests can use their sense of touch, to feel T. rex skin. The skin was designed by fabricators from the Black Hills Institute with help from the museum’s paleontologist. The T. rex skin will be featured alongside skins of fellow Cretaceous creatures Triceratops and Didelphodon (an early mammal relative).

The question of whether T. rex had feathers or not is still unanswered, but, hey, you’ll be able to pet one!

“Beyond the fun of getting up close and personal with the world’s most complete T. rex, the new sensory stations in SUE’s suite give visitors an insight into the science we do and the fascinating questions it can answer about what the planet was like 67 million years ago,” said Jaap Hoogstraten, the Field’s Director of Exhibitions, in a statement.

The new multi-sensory additions to SUE’s suite in the Griffin Halls of Evolving Planet are part of the Griffin Dinosaur Experience. The exhibit is included in the museum’s basic admission.