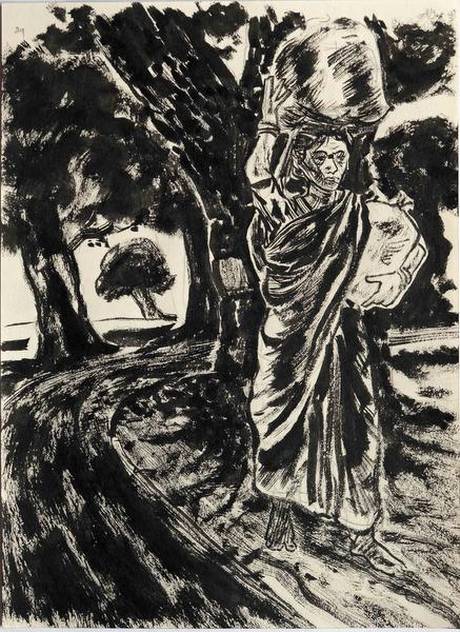 From Chennai to Nagapattinam — documenting sights, sounds and smells through sketches | The Hindu

By msensory team20/03/2020No Comments
The sketch by the artist narrating his aunt’s travels   | Photo Credit: special arrangement
Artist Anthoni Guruz walked for 20 days at a stretch from Chennai to Nagapattinam to document sights, sounds, and smells that struck him, as monochromatic sketches

Artist Anthoni Guruz had many sleepless nights last year. Tired after a long day’s walk, his attempts at getting some shut-eye would be overcome by the fear of losing his sketchbook and pen in his makeshift roadside shack for the night. This fear, also manifests itself on the pages of his sketchbook. In June last year, the artist embarked on a 20-day journey (covering almost 30 kilometres every day) on foot in search of sights, thoughts, and experiences that would later make up his MPhil thesis.

“From Napoleon to Marco Polo, everyone has documented their travels in words. Not many have charted it out in drawings,” says Anthoni.

A graphic designer by profession, over the past 10 years, Anthoni found that he was being forced to focus just on the aesthetics of his works. This is what he wished to change through the series titled Walkway Sketches, which consists of impromptu drawings in monotone — of sights, thoughts, and reactions — during his journey from Chennai to Nagapattinam by foot. They were recently on display at Loyola College, and at the Tamil Nadu J Jayalalithaa Music and Fine Arts College. 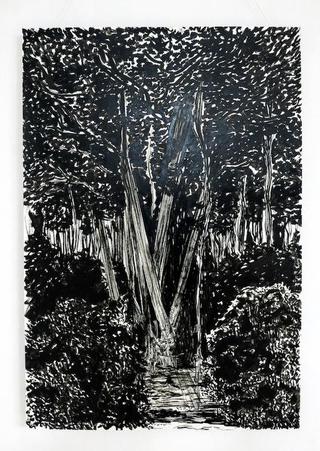 As a child, Anthoni often listened to his mother talk about his father’s athai, who would walk all the way from her village, carrying various gifts atop her head and on her hip, to see his father. This was the inspiration behind his journey.

Every page of the notebook that travelled with him — each now torn and displayed on a wooden plank — has a deeply personal story to tell; sometimes of experiences, sometimes of what he heard or felt at the moment. He whipped out his invaluable sketchbook and pen every time something struck him: breaking his preoccupation with capturing aesthetic beauty and giving in to his feelings entirely. In one such instance days into the journey, when he arrived near Marakkanam, a familiar fragrance that he associated with his childhood overcame him. “I initially thought someone was wearing the flowers and went in search of them,” recalls the 32-year-old as we gaze at the sketch that tells this story. After many futile attempts, he discovered a flowering tree, that called to him, under which he sat for hours silently reminiscing. He admits that smell and sound are his triggers. Entire sets dedicated to the various smells and sounds he encountered in his journey, do not come as a surprise, then.

The section dedicated to the various sounds he heard are his interpretations of each of them, portrayed entirely through shapes. Pointing to one in the series, ridden with small triangles that move in a cluster, yet crash against each other, visually portraying a crow’s caw, he says, “Cawing is not a pleasant sound. I find it similar to the sound that comes when a person bumps into another. The word ‘opposite’ is what stuck with me,” says Anthoni. 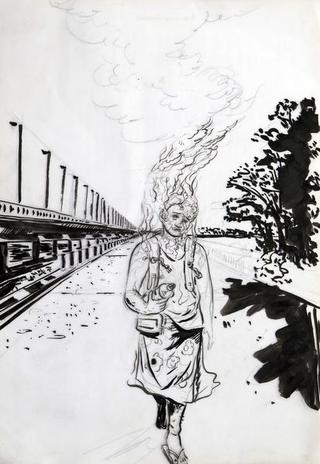 Another frame is a self-portrait, inside a dargah that he visited on the way. He can be seen lighting ghee lamps in front of the shrine, to a nondescript and predominantly black backdrop. “What fascinated me was the fact that the lamps were offered to a black wall,” recalls the artist.

When he started out, the first page of his then empty sketchbook had the drawing of his pair of sandals that took him through the journey. The journey, however, was not devoid of unpleasant sights — often when he walked at night, he tripped over a dead dog or cat, that might have fallen prey to speeding cars. He found many bottles of alcohol, too, that were discarded along the roadside. Along the course of his journey, Anthoni had to leave behind many of the veshtis he’d packed and a metal water bottle (which he offered to a thirsty student he met on the way) to make the travel ahead lighter. The clothes on him and an extra veshti to sleep on, and bag were his only companions, apart from his art-related paraphernalia.

“What made me sketch, was pain. It is also the reason why I was unable to sketch many things I saw. This is probably the first work that I have done completely for myself,” concludes Anthoni.

Source: From Chennai to Nagapattinam — documenting sights, sounds and smells through sketches