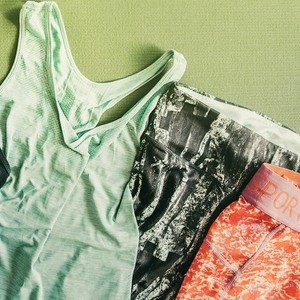 Although body odour is natural and normal, most people consider it unpleasant.

“BO” is the result of bacteria breaking down the protein in sweat into acids. Excessive body odour may indicate that there is something wrong with you, or it could just be the result of a strenuous gym session.

Now there may be no need to worry about smelly gym clothes any more with a new fabric, which helps neutralise the smell of sweaty gym clothes with a fresh burst of fragrance.

According to ACS Applied Materials, the strategy researchers have been working on involves a cotton fabric, which emits a lemon-citronella aroma once it comes into contact with sweat, successfully masking any body odour.

The research was funded by the Portuguese Foundation for Science and Technology and the European Regional Development Fund. Scientists previously worked on fabrics which react to light, temperature or mechanical stress by conducting signals or changing colour.

A quick burst of scent

Researchers Carla Silva, Artur Cavaco-Paulo and colleagues developed a new strategy by developing a fabric to release a fragrance, namely β-Citronellol, a scent derived from lemongrass, which is often used to repel insects.

They started off by using an odourant-binding protein (OBP) found in the noses of pigs which binds to β-Citronellol and other other scent molecules. The researchers then attached a protein domain to the OPB, which binds to cotton. After that, the fragrance was packaged in liposomes, with CBMs (carbohydrate-binding molecules) anchoring the lipid carriers and their cargo to the fabric.

The team then exposed the cotton fabrics to an acidic sweat solution, the low pH of the perspiration causing the OBP and liposomes to emit β-Citronellol. When comparing the strategies, it was found that the OBP released a quick burst of scent, while the release of liposomes was slower and more controlled, emitting more fragrance.

Source: Fragrance-releasing fabric may make smelly gym clothes a thing of the past | Health24