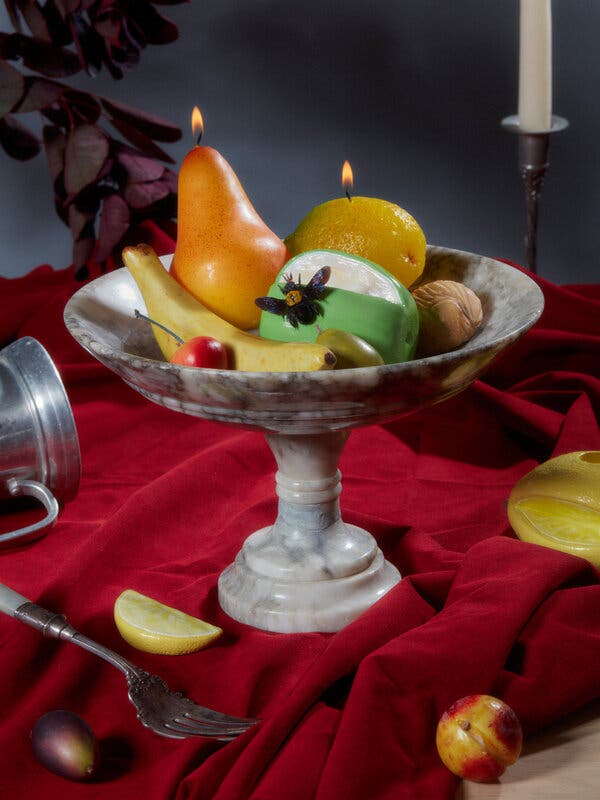 A still life with a marble banana, a marble cherry and a marble hazelnut sold by John Derian; a pear and a lemon candle from Cereria Introna sold by East Fork; and a clay apple candleholder and clay lemon candleholder, made by Anamaria Morris.Credit…David Brandon Geeting for The New York Times

In the world of home décor, maximalism is back — and with it, tchotchkes that were once regarded as kitschy or quaint.

A still life with a marble banana, a marble cherry and a marble hazelnut sold by John Derian; a pear and a lemon candle from Cereria Introna sold by East Fork; and a clay apple candleholder and clay lemon candleholder, made by Anamaria Morris.Credit…David Brandon Geeting for The New York Times

While a minimalist interior may have represented an aspirational environment only a few years ago, it seems that intermittent lockdowns and supply-chain-induced shortages have led people to re-evaluate the aesthetic of an empty house.

The result is a resurgence of maximalist home décor that embraces pattern, color and ornamentation. Cabinetry that may once have been wood grain is now jewel-toned; streamlined furniture has given way to all things squishy and wiggly; trends like “cottagecore” and “grandmillennial” aim to elevate items that are handmade, chintzy and secondhand.

Is it any wonder that fake food is back, too?

Charcuterie and cheese candles, resin-cast croissants and Jell-O salad lamps are hot items. Retro-style fake cakes are big on Instagram. The high-end jewelry brand Mociun sells faux glasses of spilled wine and melting ice cream cones alongside $10,000 engagement rings. And Yukiko Morita’s Pampshade lamps, which are made from real baked goods that have been preserved, can sell for around $80 apiece.

For John Derian, the founder of an eponymous home décor and decoupage line, the resurgence of fake food is very welcome. Mr. Derian has had a fake cake sitting on his kitchen counter at home for 14 years, he said, and he estimates that he has been selling food-themed items in his store for about 20 years, starting with a stuffed doll made by Nathalie Lete that had sausages for arms and a steak for a head.

“I do love funny things,” he said.

These days, Mr. Derian also offers more elegant fake food items for customers who are less interested in kitsch, including stone bananas and cherries carved in Tuscany using marble from the same quarry that Michelangelo favored.

For about 10 years Mr. Derian has also been selling food-shaped candles by Cereria Introna, an Italian company that has been around since 1840. (This year, Cereria Introna, which makes all of its candles by hand and supplies many other design shops including East Fork and Fruit and Flower Shop, saw demand for its food candles in the U.S. increase to the point where it was unable to fulfill all of its orders.)

Mr. Derian often displays the paraffin wax beauties, which include doughnuts, cakes, cupcakes and pies, in the front window of his shop.

“Everyone responds to them with joy,” he said. “Sometimes I move them around the shop, but I keep putting them in front because they’re just something bright and colorful and cheerful.”

A Question of Taste

Fake food has been used for decoration for centuries. Trompe l’oeil porcelain, made in 18th-century Europe, often took the form of fruit and vegetables, including melons and peas in a pod. There are examples of plates of fruit made from jade and alabaster from the Qing dynasty in China.

In recent centuries, fake food has remained popular in more utilitarian settings. In Japan, fake food, or sampuru, is displayed in the windows of restaurants, and can cost hundreds of dollars for artisans to custom make. In the U.S., fake wedding cakes can help preserve a visual tradition of a layered confectionary, while helping to cut down on the price of the real cake served during the reception.

But when it comes to fake food as objets d’art in the American home, Sarah Archer, a design and culture writer and the author of the 2019 book “The Midcentury Kitchen,” suggests looking back to the 1950s and 1960s, when fake food became a midcentury trend.

“Blown glass fruit was super popular in the ’50s and ’60s, especially after World War II when it was more affordable and kind of interesting or enticing for middle class Americans to travel abroad to Italy,” Ms. Archer said in a recent interview. American tourists would return from their journeys with glass apples or pears as souvenirs.

“It kind of represents domesticity and a certain middle class effort at beautification, but it’s also kind of tacky at the same time,” Ms. Archer said. “It occupies a sort of nebulous status.”

For some of the artisans and brands that sell fake food today, the question of taste — or of questionable taste — is what drew them to the trend in the first place.

Leanne Rodriguez, an artist in Oakland, Calif., who goes by Elrod, began making fake gelatin salad lamps during the pandemic; in a recent interview, Ms. Rodriguez said she wanted the effect “to be a little on the disgusting side.”

Using recipes for gelatin salads from midcentury cookbooks as inspiration, Ms. Rodriguez suspends hot dogs, vegetables and chopped fruit made out of clay in sparkly resin. Her creations, which she has branded Mexakitchen and sells as part of her Mexakitsch line of artwork, emanate an eerie glow from LED lights inside. Ms. Rodriguez said that a fascination with kitsch is what drew her to make the lamps in the first place, and the more she makes them, the more opulent they get.

The joy that fake food can bring to a home is something that Jazmine Rogers, a content creator in San Diego, was familiar with from her childhood.

Her grandmother had a collection of fake fruit made out of cardboard, and when Ms. Rogers was decorating her own home in San Diego, she made sure to seek out fake food pieces to display. In addition to a glass ear of corn and a glass orange in her home office, she bought a fake cake made of cardboard and spackling paste to hang on the wall.

“There’s something about it that just feels really homey to me,” Ms. Rogers, 25, said. “It’s kind of like playing with your food, it’s like your food’s in places that it’s not supposed to be. There’s something fun about it.”

Ms. Rogers’s fake cake was made by Jasmine Archie, an artist in Austin, Texas, who has been surprised and delighted by the market for her eccentric, color-saturated confectionary-inspired creations.

“People freaked out,” Ms. Archie, 25, said about the first few fake cakes she made. “It’s already on the market, but it was so untapped with my generation in my opinion. And I was like OK, I could totally market this and see what could happen.”

Ms. Archie believes that part of the reason her pieces are so popular is because of what cakes, especially colorful and lavishly decorated ones, represent.

“When I see a cake, I always think something celebratory is happening,” Ms. Archie said. “I think when people look at a cake, and in my case, it just brings them happiness.”

It’s this happiness and playfulness that inspired Mociun, the fine jewelry brand, to begin selling fake food in their boutique in 2018. Caitlin Mociun, the designer and founder of the company, which is based in Brooklyn, had a personal collection of fake food that the brand would use as props in product shoots and as display items in their store. So many customers asked if the fake food items were for sale, that Mociun began offering them alongside ceramics and glassware.

“I think the humorous aspect of it is definitely appealing to a lot of people,” said Marney Zaslav, the director of buying and operations. Especially in the last few years, fake food has become a distinct category for Mociun; items can range in price from $15 to $400.

“A lot of these things, even if we just put them in our window in the store, they definitely stop people in their tracks when they walk by,” Ms. Zaslav said.

Lately, consumers haven’t just been window-shopping; they have been seeking out fake food items online.

According to Etsy, there has been a 36 percent increase in searches for faux cakes on the site in the last three months, compared to the same time the previous year.

Dayna Isom Johnson, a trend expert at Etsy, attributed the uptick in searches for these items to two factors. “The first is that shoppers are looking for creative and playful ways to add brightness and vibrancy to their space. Faux food is an easy way to inject a sense of freshness into any space, while lasting longer than the real thing,” she wrote in an email.

“The other is the influence of social media,” she added. “Etsy sellers can react quickly to emerging trends faster than big-box retailers so we’re constantly seeing emerging inventory that reflects something we’re seeing in the zeitgeist — in this case, the cereal-inspired candles.”

Ms. Archer, the design and culture writer, said that she thinks consumers are craving interior design choices that are as comforting as they are whimsical.

Fake food is “a relatively inexpensive, easy and creative way to make your home joyfully wacky,” she said. “I definitely think that there is a desire for a sense of play.”