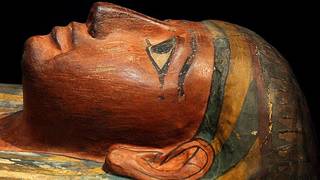 ANN ARBOR – Before you say “gross” — it’s not what you think.

Did you know that many of today’s luxury perfumes contain several aromatics used in ancient Egypt in sacred mummification rituals?

Fragrance expert and blogger Michelle Krell Kydd is obsessed with scents, and she will bring this spooky class to the Ann Arbor District Library downtown branch on Nov. 14 at 6:30 p.m.

She will aim to answer the question: “If materials used in perfumery were also used to send mummies into the afterlife what on Earth do mummies smell like?”

Kydd recently sniffed mummies in the basement of the University of Michigan’s Kelsey Museum of Archaeology and came to this conclusion: “Mummies don’t smell like decomposition, but they don’t smell like Chanel No. 5 either.”

Kydd hopes to take attendees on a journey of the scents the Egyptians would send with mummies into the afterlife. Participants can expect to smell a perfume inspired by the smell of mummies at the Kelsey Museum called “Simulacra of Mummy” and other natural extracts commonly used in mummification.