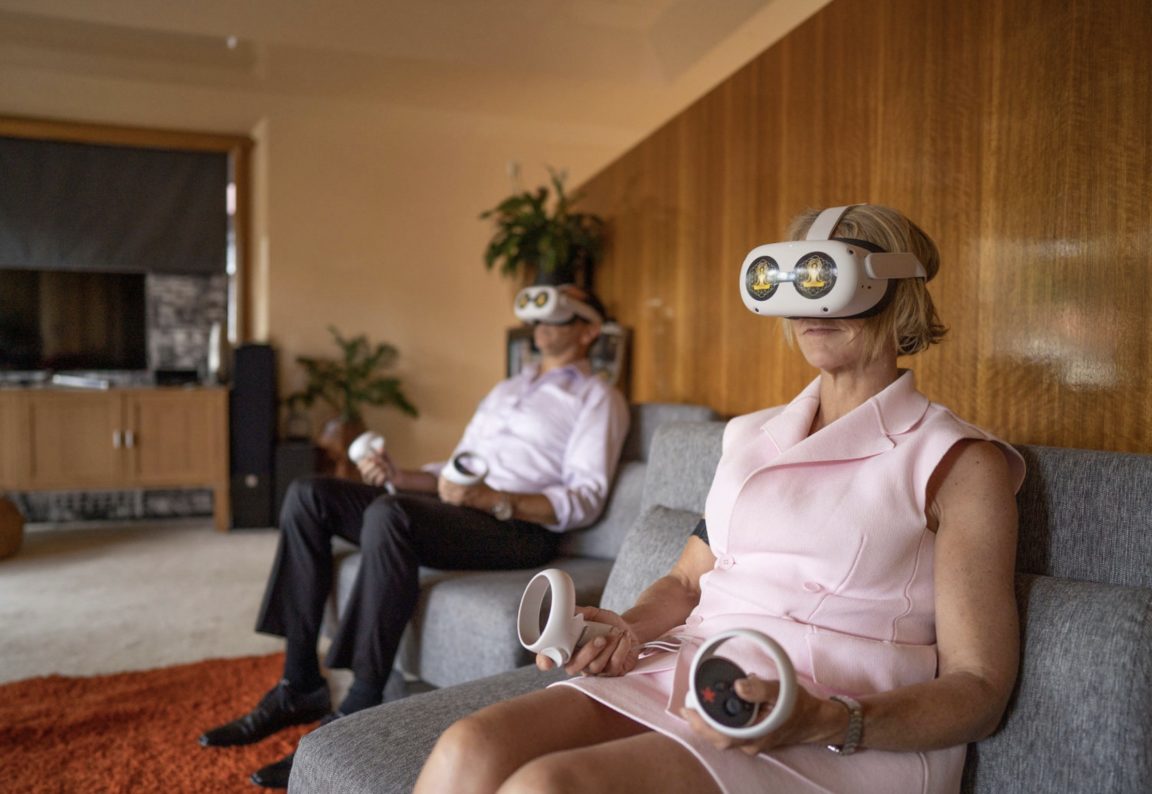 The app claims it is the first virtual reality application that has a multi-sensory approach to meditation where the user can customise each experience.

Guided meditations range from 2 to 25 minutes with an average time of 10 minutes and dashboards show changes in emotional state, reporting on heart rate and heart rate variability measurements when using the Rhythm Heart Rate Band for biofeedback results.

Using the Oculus Quest virtual reality headset, the user can choose to use LED lights (eyes closed-flicker effect) or be situated in both real and virtual scenes, including forests, space, the beach and being amongst sacred geometry shapes and space.

Music, smells (from the University of Queensland’s ‘Serenascent’ and essential oils), voice tracks and visual environments all change based on the user choice and the Rhythm heart rate band enables tracking of heart rate and heart rate variability for both individual and group reporting.

Edwina says, “My belief is that every human being should meditate. Research shows that meditation can give you a sense of calm, peace and balance that can benefit both your emotional well-being and your overall health.

“One of the central benefits of meditation is that it improves attention and concentration, and it can also reduce blood pressure, anxiety, depression, symptoms of irritable bowel syndrome, and insomnia.”

Even if someone isn’t a regular meditator, the multi-sensory approach enables them to ‘feel’ the benefits and to be relaxed in the experience regardless of whether they are a regular meditator or not. Repetition of  guided meditations trains the mind (via neuroplasticity) towards positive thinking and healthy choices.”

”It’s totally customisable and every meditation can be different. You can change the music, the environment, the voiceover – and you can build it, from a few minutes of meditation to as long as you want.

“I wanted to create experiences that are better and more-effective than real life.”

The sound element also includes Solfeggio frequencies, which refer to specific tones of sound that support body and mind health. Research shows Solfeggio sound healing frequencies can help with endocrine system, which is particularly important in the management of stress.

“It’s the first time this sort of music will be on a meditation app and Solfeggio frequencies have been referenced back in ancient history including with Gregorian Monks and Indian Sanskrit chants,” says Edwina.

“Cymatics – observing the effects of sounds and frequency on matter – demonstrates these potential effects visually.

“The Schumann resonance was mathematically documented in the 1950s and further research since then has linked it to our human brainwave states and found synchronization for higher brain function.

“Interestingly, there is technology out there now that can record the frequencies of plants – picking up the frequency of the vibration of the plant and then converting that to sound – which is wild.

“Two of the tracks are the music of the geranium plant and marijuana plant, with the didgeridoo over the top of it. It’s a unique, beautiful sound.”

• stress and burnout in the workplace

• the well-being of carers

• stress for people with disabilities

AtOne Subscription: (for use on your Oculus Quest) costs $18 per month or $179 per year.