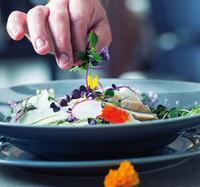 New International Organization for Standardization (ISO) guidelines for defining, measuring and evaluating soundscapes are a big step forward in guiding the creation of soundscape design in restaurants, according to acoustics consultant Klaus Genuit, President and Founder of German sound engineering firm Head Acoustics. For the first time, the new ISO standards include the required recording and assessment of binaural sounds as part of dining room evaluation. Unlike a mono or stereo recording, a binaural recording is an immersive, 3D version that recreates the exact experience of being in a particular setting for future listeners.

Multi-sensory dining has been gaining prominence in the world of food and beverages recently and has been highlighted for its potential in elevating taste perceptions. Brands have become attuned to this knowledge, and have sought to incorporate sound, among other sensory stimulants, in capturing consumers’ attention.

Guiness, as an example, gave Tesco shoppers an opportunity to sample its house beer while immersed in a 360-degree sound and sight environment via Virtual Reality (VR) goggles. And earlier this year, chocolatier Godiva released three audio tracks composed based on three popular flavors as part of its “Symphony of Taste” campaign with help from researchers at the University of Oxford.

“A soup might be delicious or not, but you can’t answer this by knowing the temperature of the soup. It is the same with restaurant soundscapes – you need a lot more information than just noise level,” says Genuit.

Genuit, who participated in the development of the new ISO standards, said restaurants present a particular challenge for soundscape design. “It’s quite the opposite in restaurant acoustics,” he says. “I don’t want to listen to the people at the table beside me, and I want to have acoustical privacy so they don’t hear me.” On the other hand, “you don’t feel comfortable if it’s too quiet,” he explains.

“For a complex sound situation where you have a lot of sources, from tinkling cutlery to music and conversation, the selectivity of human hearing works only with binaural recording,” says Genuit. In 1986, he founded Head Acoustics by creating an artificial head, based on his doctoral research, with microphones in the place of ears to make binaural recordings.

The ISO guidelines outline the analysis of the soundscape using psychoacoustics, which describes how a person perceives a sound – for example, as “sharp” or “rough.”

“This perception is dependent on the context,” says Genuit, noting that a rough rumble sounds can be exciting if coming from a car at a NASCAR race  – but not from the air conditioner at a bistro. Loud air conditioner noise is among the most annoying sounds in US restaurant soundscapes, according to Genuit.

Finally, the new ISO guidelines require acoustic consultants to survey diners using a questionnaire to acquire an understanding of their experience in the dining room. “You have to ask people how they feel in this sound environment,” says Genuit.

To contact our editorial team please email us at editorial@cnsmedia.com

“Everything I buy is vintage and smells funny. Maybe that’s why I don’t have a boyfriend.”