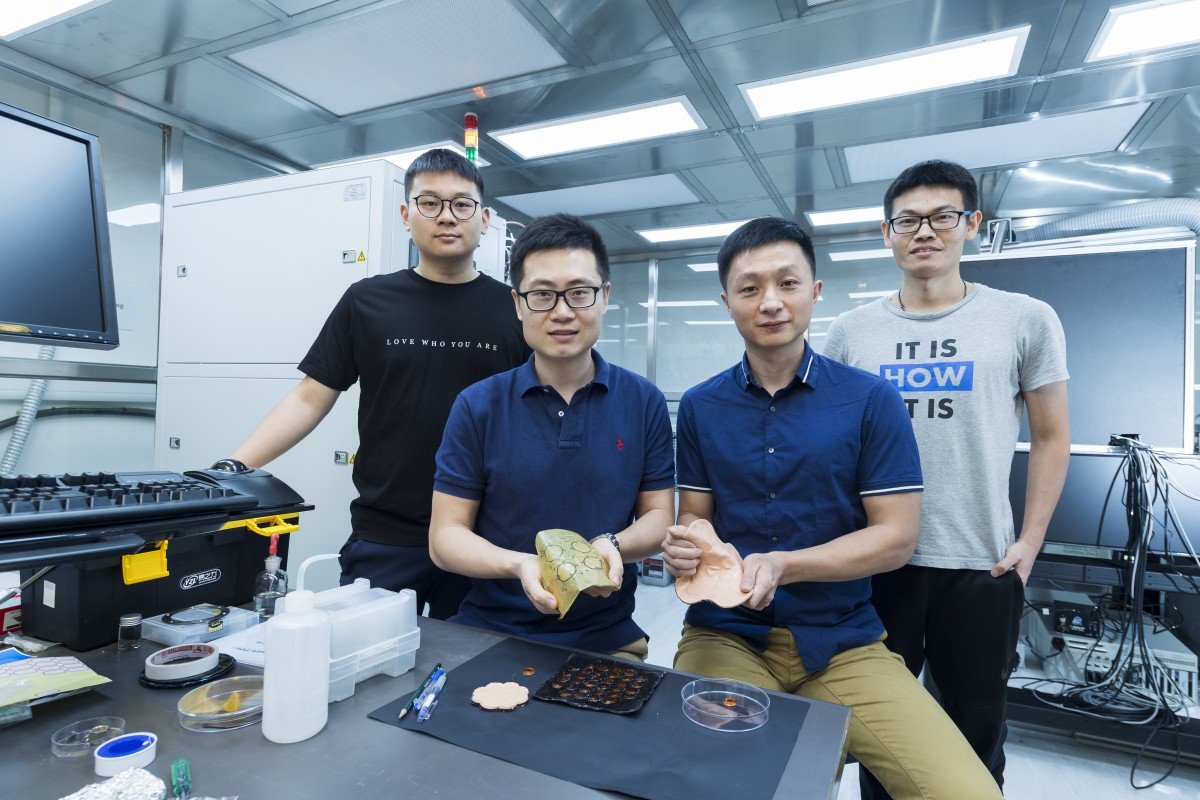 A system of “electronic skin-integrated haptic interfaces” jointly developed by City University of Hong Kong (CityU) and other academic institutions can help users of prosthesis to feel the surrounding environment and be used for social media, entertainment and gaming.

This novel system can transmit sensory stimuli to the body via the wireless actuator that converts energy to mechanical vibrations. It uses our skin as the sensory interface for virtual reality (VR) and augmented reality (AR).

The research achievement has recently been published in Nature, a leading international journal, in an article titled “Skin-Integrated Wireless Haptic Interfaces for Virtual and Augmented Reality”.

“Our target is to develop electronic skin that can be comparable to human skin,” said Dr Yu Xinge, the principal author of the article and Assistant Professor at CityU’s Department of Biomedical Engineering. “Compared with similar types of equipment on the market, our new system is light and thin that can be tightly attached to human skin. Also, it’s wire-free and battery-free.”

New materials, device structures, power delivery strategies and communication schemes have been adopted by the research team to develop the system. By employing sophisticated structural mechanics design, the new soft skin device, which is composed of more than 700 functional components, has only a thickness of less than 3 millimetres.

Different layers of the device include a thin elastomeric layer as a reversible, soft adhesive interface to the skin, a silicone encapsulated functional layer that supports a wireless control system and a series of interconnected actuators, and an external layer of breathable fabric, which can be put together with wearable clothes.

“Conventional actuators that provide sensory vibrations require power of about 100 milliwatts to transmit signals. However, as our new system uses radio frequency [RF] for power supply, it needs less than 2 milliwatts to transmit signals and produce the same level of mechanical vibrations. Thus, we solved the difficult problem of transmission by low-power wireless function and significantly increased the distance of the operation for our system. This system not only saves power but also allows users to move more freely without the trouble of wires,” Dr Yu said.

The new system can be used for social media and electronic games, and also help users of prostheses feel the external environment through the sense of touch and provide feedback to the users. In addition, it can be used for developing virtual scenes for clinical applications.

The newly developed system of “skin-integrated haptic interfaces” can help users of prosthesis to feel the surrounding environment and be used for social media, entertainment and gaming.

The sound and music are 50% of the entertainment in a movie.