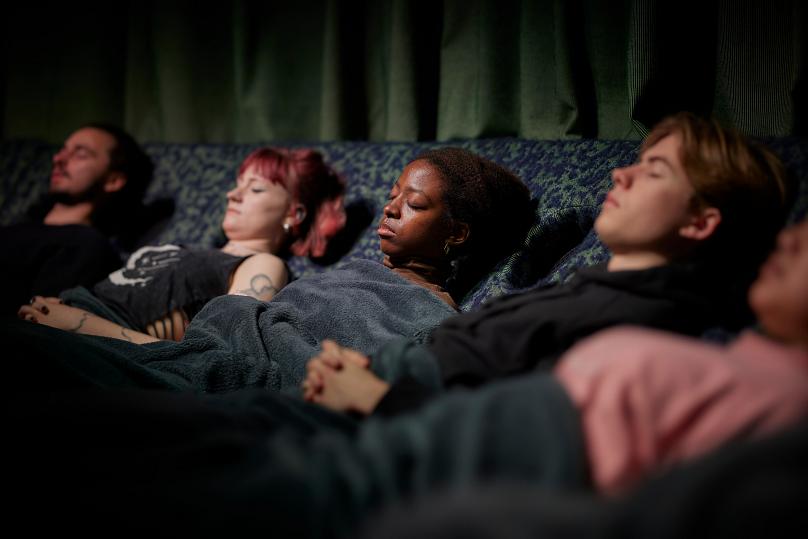 A new project created by a collective of artists, musicians and scientists invites visitors to explore the extraordinary potential of the mind.

Thanks to strobe lighting and surround sound technology, visitors can expect to close their eyes and see colourful patterns, shapes, landscapes, or abstract waves appear in front of them.

‘Seeing art with your eyes shut’ is the promise of the new immersive art experience titled ‘Dreamachine’, opening in London.

What’s the science behind the Dreamachine?

The surround sound, strobing and ambient lights are meant to create visual impressions in participants’ minds, which are perceived differently from one person to another.

Some see single blocks of colours, others see tiny patterns.

In his research, he found that bright flashing lights can create visual hallucinations, which neuroscientists call stroboscopically-induced.

According to his theory, the flickering light imposes a beat to the rhythm of the brain, especially its visual part.

“What’s happening in the Dreamachine is that the light is in training with this natural alpha rhythm of the brain. It’s also a rhythm that we tend to observe in the brain when people are feeling relaxed. And by doing this in ways that I have to say, we still don’t completely understand, that gives rise to these vivid visual experiences that people have,” says Anil Seth, a neuroscientist involved in the project.

Thanks to this experience, Seth hopes to understand more about our brain.

What does the experience involve?

When participants enter the Dreamachine, they’re given a blanket and are asked to lay down on a sofa in a round room.

The room is designed by the collective Assemble and can contain up to 30 people.

The session begins with a five-minute introduction to what’s going to happen, after which the full 20-minute experience begins.

People are free to leave if the experience is too intense or they feel unwell.

“So it was kind of composed in stereo, and then gradually over the last year, we’ve mixed it in different spaces to more and more speakers, and now it’s on 86 speakers in this space. So it’s the most immersive possible sound,” explained Hopkins.

After the experience, visitors can spend time in a space of reflection, to talk about their experience with staff members.

They can also draw what they saw and answer a questionnaire about their experience on smart tablets.

“Dreamachine” runs from 10 May until 24 July in London, and will also be available in Cardiff, Belfast and Edinburgh as part of Unboxed, an art festival happening all over the UK.

“Church is the original “multi-sensorial experience” – so let’s reclaim that. We’ve got music, and words, and images, and bread and wine, and stained-glass windows, and (lest we forget) actual, physical flesh-and-blood people around us.”