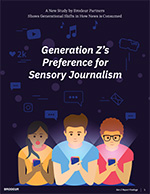 Demand for ‘Sensory Journalism’ on the Rise | ODWYERP

Millennials and Gen Z consumers want to watch news more than they want to read it, and also have distinct preferences as to how that news should be presented, according to a new study from Brodeur Partners.

While just 20 percent of Boomers who responded to the survey said they prefer journalism that includes virtual and augmented reality, that number rises to 33 percent for Gen Xers, and to nearly half for Millennials (48 percent) and GenZers (47 percent).

YouTube was rated the first or second most important news source by 49 percent of survey respondents. Only 12 percent of Boomers rated YouTube that highly, with 26 percent of Gen Xers and 44 percent of Millennials putting it at or near the top of their news sources. When it comes to print media, 60 percent of Boomers said that newspaper and magazines were one of their most important news sources, but that’s the case for just 17 percent of GenZers.Not only is this “sensory journalism” on the rise, but the preferred channels for consuming news also vary greatly from generation to generation. Television has been replaced by digital platforms such as YouTube for younger consumers, and the importance of newspapers and magazines declines sharply with each generation.

Combined with the desire for sensory journalism and new ways of consuming it is an increasing focus on entertainment and engagement. About three out of four Millennials (76 percent) and Gen Zers (72 percent) surveyed said the news they consume is 50 percent or more entertainment. That number drops to 60 percent for Gen Xers and 41 percent for Boomers.

These trends are driving changes in how reporting gets delivered to consumers, says Brodeur Partners CEO Andrea Coville.  Younger consumers “live in an 8-second world and everything is sensory to the them,” she said. “So to get their attention, the media needs to adapt the way they deliver the news, and brands need to think about how they package their news to reporters to help them tell their stories in a more sensory way.”