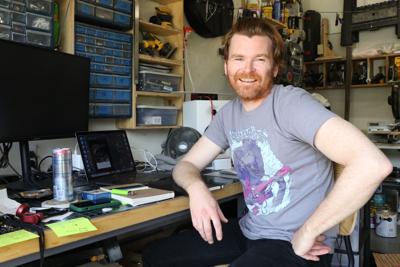 Creative ferment often takes its energy from artists of all stripes coming together. Poets inspire painters. Musicians excite sculptors. Dancers have been known to arouse architects.

Often artists may possess multiple creative talents and find themselves torn between muses. Norman artist Craig Swan is one of those.

The University of Oklahoma MFA candidate and active member of Resonator Institute has curated an exhibition titled Visaural. The show is a multi-faceted event with elements of traditional visual arts, sound, music and video.

Swan explained the impetus for mounting Visaural. The title is a corruption of the words visual and aural.

“Recently my work has taken a big left turn,” Swan said. “I’m known more for visual things such as drawing and sculpture. But I’ve been a musician since I was 12. I’ve taken a turn toward sound art. There’s a connection between that and sculpture, along with the gray area between music, sound, video and art. In a way it’s like I’m learning to see all over again, getting over undergraduate work and into a new area of graduate work.”

Since taking his BFA in sculpture from Boston University in 2007, Swan’s work has been included in nearly 40 exhibitions. His sculptures “Sundial” and “Ziggy Star-Duck” are part of Norman’s public art collection.

Creative commissions range from providing imagery for a scholarly textbook cover, to restoring an antique church pew. He has taught art classes for students ages 8 to 80 at the Firehouse Art Center and Resonator Institute.

“I’ll have sound work, sculpture, video and paintings at the show,” Swan said. “We’ll present some of the sound work as though it’s a piece we’re going to play. After that we’ll get musical instruments, with Eli on synthesizer, and do an audio exploration. It won’t be quite a song and won’t be quite sound.”

Swan described his process as juxtaposing spoken words, poetry, visual imagery and guitars that sound like something else into emotional content.

“It does what I’ve always wanted my paintings to do but could never get them to do it,” he said. “The words, music and visuals on their own don’t do the thing. I have to have all those areas come together to actually be effective in some kind of way.”

Swan’s curatorial magic for Visaural marshaled the talent of people he knew right here in Norman.

“This confluence of identities with a subversion of commercial interests for an expression of things is a more expansive expression of what we do,” Swan said.

Norman’s arts scene observers have long recognized Swan as a spark plug and genuine leader. He’s Resonator’s chief of operations and has served as a panelist for Norman Arts Council’s grants committee.

“You start out with an idea and then react to thoughts and questions about what other people want to do,” he said. “It’s a lot of improvisation and things you might not come up with on your own. Trying to build something up from just a little kernel of an idea that more than one person may have, but they’re experiencing it in different ways. It can be a new thing growing out of the combined experiences.”

OU’s School of Visual Arts is a different kind of arts collective. Swan excels in its more formalized setting as well.

His acrylic paint on panel image titled “Ribs Moan like the Hull of an Old Boat” was selected for inclusion in this year’s 108th annual School of Art’s student exhibition.

The poetic title is reflective of Swan’s love of literature, its impact on his art and the man’s Irish heritage. He gives OU a thumbs up so far for the value of funds, effort and time devoted to MFA candidacy.

“It’s been good, with a lot of growth,” Swan said. “A lot of reading and thinking. I have my home studio and one out at the graduate student annex. I had forgotten what it was like to have conversations with people who are into the pure art-ness of things.”

He described a recalibration from the making art to sell for survival mindset, to one of making art that will survive.

“Keep the idea going and push on to the next thing,” he said.

Graduate school and other demands have presently pushed out his ability to privately teach young art students. But it was an experience he fondly recalls with some recent feedback about a former student who did not go on to study art at university.

“The eldest one I worked with was 13 when we started and she just finished her freshman year at OU,” Swan said. “Her parents are telling me that all of the ways of thinking from the art lessons really translated into the way she perceives and understands work ethic and completing requirements for class. It makes me feel good to know I had that positive impact.”