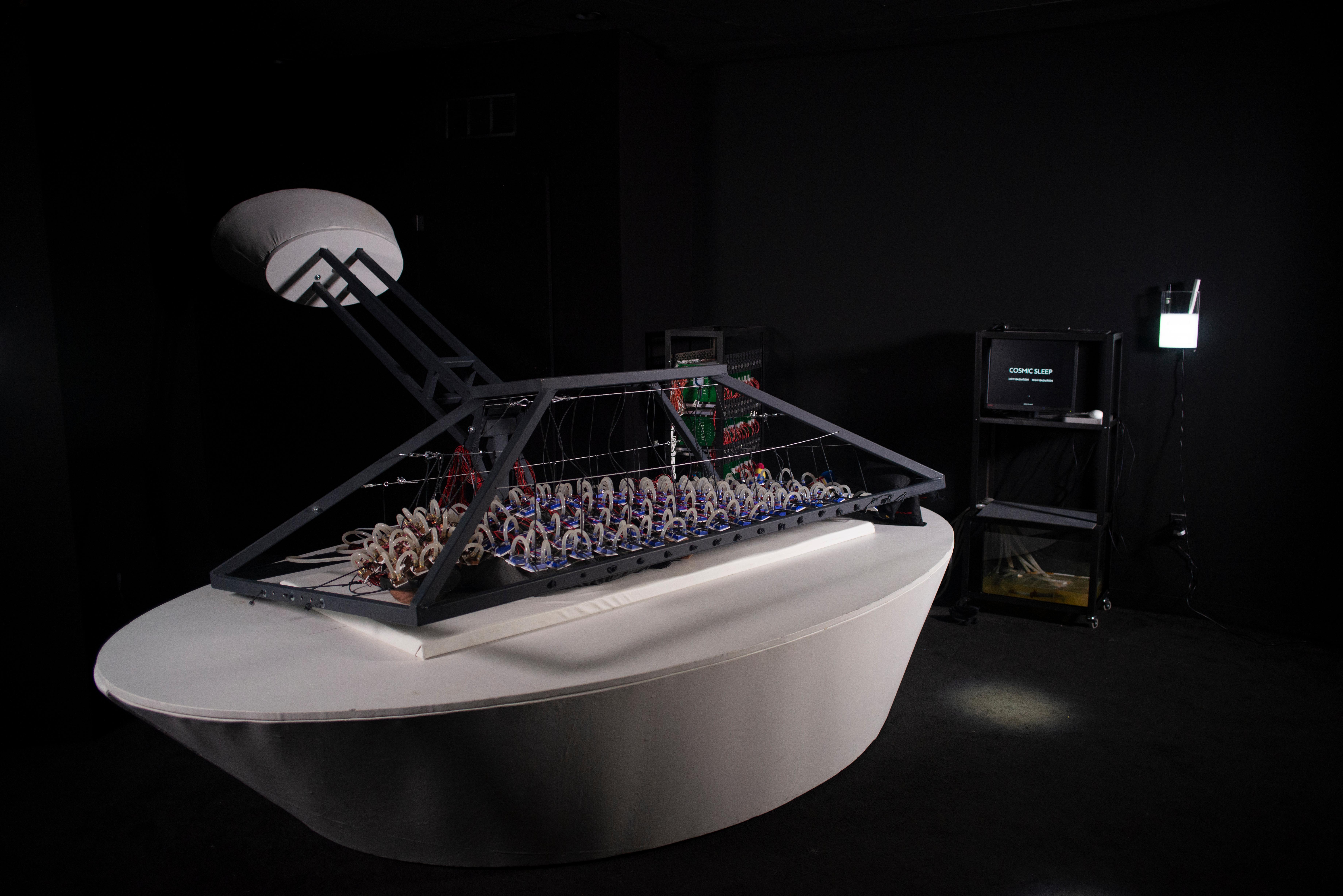 “Cosmic Sleep”Most of us don’t spend a lot of time appreciating our sense of smell. One 2011 global survey suggests that 53% of millennials would rather lose their ability to smell things than give up their laptop or cellphone.

But research shows that scent is deeply intertwined with emotion and memory. And so we do ourselves a favor when we consider smells beyond fancy perfumes and scented candles, explains designer Frederik Duerinck. ”Traditionally fragrances are very glamorous but for me all those things are shallow,” he explains. “There’s something deeper that scent can do that starts on a core level—in the soul of a human.”

As co-founder of the inventive multi-disciplinary studio Polymorf, Duerinck has unique insight on the matter. Over the past five years, the Dutch design collective has been experimenting with scent as a storytelling medium. Their award-winning 2014 exhibition Famous Deaths, uses scents to vivify the last breaths of deceased celebrities. (Guests who dare to jump inside a mortuary freezer, for instance, smell the heady mix of gunpowder and Jackie O’s perfume in John F. Kennedy’s assassination.)

Their latest exhibition titled Avant-Garden, is no less captivating. Housed in the International Flavors & Fragrances’s New York City headquarters, Avant-Garden was designed based on dialogues between scientists and perfumers. As part of IFF’s exploration about the role of scents in an increasingly tech-dominated future, the exhibition demonstrates how our noses create richer, more humanizing experiences.

After signing a waiver, visitors climb into a contraption that opens like a giant panini press. Small transmitters resting on the entire length of your body emit various temperatures—warmer when the meteorite is closer to the sun, cooler when it’s drifting in space. As the thermal stimulation apparatus clamps down, you’re blindfolded and strapped with headphones, while a mesh mask is placed over your face. Mercifully, you’re also handed a red abort button, in case things get too intense.

The “Cosmic Sleep” experience can be scary—even panic-inducing!—for the first few seconds. But an odd peaceful sensation eventually settles in. As a God-like narrator with a faint Dutch accent speaks in your ear, a light amber mist wafts over you. Experiencing the imaginary intergalactic journey feels a bit like dying and being reborn at the same time.

Other installations at the exhibit are equally thought-provoking. “Dialect for a New Era” is a collaboration between IFF perfumer, or “nose,” Laurent Le Guernec and linguist Asifa Majid. On 16 lighted plinths are phrases that evoke concepts such as singularity, hacking, and FOMO. Le Guernec translates the words to an original scent “signature,” which is released by pushing a button on the side of the plinth.

The phrase “a collective moment of déjà vu,” for instance, smells like birthday cake. “Perfect entanglement” smells a bit soapy. Pairing words and scent molecules is an experiment in expanding language beyond words—like a “dialect through scent,” explains Anahita Mekanik, Avant-Garden‘s producer.

“I call it my scent Tinder,” jokes Barel who was inspired by biologist Carin Bondar’s 2016 book, Wild Sex: The Science Behind Mating in the Animal Kingdom.

In another room is “Mood Cloud” by Jean-Marc Chaillan, who worked with psychiatrist Mazda Adli to prototype a flying object that uses scents as an instrument for increasing well-being in busy cities. The “cloud”—represented by two mylar balloons in the exhibition—emits a calming “scent shower” to the most stressed-out parts of a city, based on health data collected through an app.

Scent is an exciting and challenging media to work with. The rather sterile-looking photographs from the exhibition here—or the few on Instagram—don’t sufficiently convey Avant-Garden’s genius. But perhaps it’s a blessing that we can’t capture smells our phones (yet) or share scents on social media.

In an often-overstimulating world, taking some time to appreciate scents is an opportunity to slow down, follow one’s curiosity, and focus on subtleties. It can feel a bit daring—like willfully climbing in to Cosmic Sleep’s otherworldly cage. But our sense of smell, it turns out, can teach us how to be present and alive again.

Source: One of the best ways to enrich your experience of life is vastly underrated

“The greatest honor that can be paid to the work of art, on its pedestal of ritual display, is to describe it with sensory completeness. We need a science of description. Criticism is ceremonial revivification.”