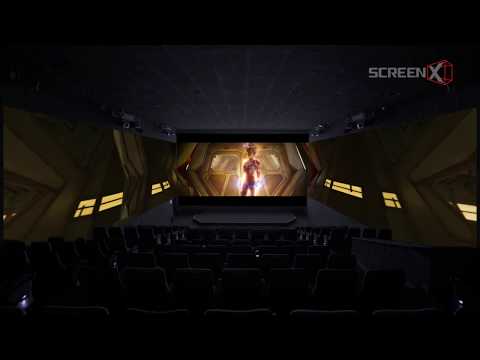 “Captain Marvel” will be the third movie from Marvel to be converted into ScreenX, and the latest collaboration between The Walt Disney Studios and CJ 4DPLEX, following the globally successful ScreenX release of “Black Panther” and “Ant-Man and The Wasp“. “Captain Marvel” stars Brie Larson in the title role and is directed by Anna Boden and Ryan Fleck.

ScreenX is the world’s first multi-projection theatre technology that allows a 270-degree panoramic movie watching experience. ScreenX allows the audience to go beyond the frame of the traditional movie screen, utilizing a proprietary system to expand the center screen image to the side walls, surrounding audiences with imagery and providing a sense of being inside the movie.

“‘Captain Marvel’ is another great movie from the Marvel Cinematic Universe that continues to showcase the full potential of the ScreenX format by taking us on an otherworldly heroic journey,” said JongRyul Kim, CEO of CJ 4DPLEX. “We are thrilled to team with The Walt Disney Studios and Marvel Studios to bring this inspiring new heroine to audiences in our newest cinematic experience.”

ScreenX has quickly enhanced its international reach, successfully screening Hollywood blockbusters and local feature films alike, including a record of eight Hollywood blockbusters released in ScreenX in 2018. In the past 12 months alone, ScreenX has seen a surge in the number of ScreenX installed auditoriums, which have grown to 200, a more than 50% increase year-over-year and will nearly double its footprint with the recently announced expansion plan with the Cineworld Group to open 100 locations across the U.S. and Europe.

Set in the 1990s, Marvel Studios’ “Captain Marvel” is an all-new adventure from a previously unseen period in the history of the Marvel Cinematic Universe that follows the journey of Carol Danvers as she becomes one of the universe’s most powerful heroes. While a galactic war between two alien races reaches Earth, Danvers finds herself and a small cadre of allies at the center of the maelstrom.

CJ 4DPLEX is a leading, next-generation cinema technology company, headquartered in Seoul with international offices in Los Angeles and Beijing. The company has created immersive film technologies for theaters worldwide that include ‘4DX’, ‘ScreenX’ and ‘4DX with ScreenX’ for consumers to experience films in ways that were never before possible.

4DX provides moviegoers with an immersive, multi-sensory experience, allowing the audience to connect with movies through motion, vibration, water, wind, snow, lightning, scents, and other special effects that enhance the visuals on-screen. Each 4DX auditorium incorporates motion-based seating synchronized with more than 20 different effects and optimized by a team of skilled editors, maximizing the feeling of immersion within the movie, beyond the limits of audio and video. More than 610 Hollywood and local titles have been screened in 4DX. To date, more than 71,000 4DX seats operate in 616 auditoriums, spanning 62 countries.

ScreenX is the world’s first multi-projection theater technology used within a theatre setting, marking it as the most visually immersive theater experience of CJ 4DPLEX. ScreenX allows moviegoers to go beyond the frame of the movie screen by utilizing a proprietary system that expands images of feature films and pre-show advertising to the left and right walls of the theatre, creating an immersive, panoramic, 270-degree viewing experience. To date, ScreenX has been installed in 200 screens around the world, including 87 screens in South Korea; 66 screens in China; 16 in the United States; 8 in England; 4 in Turkey; 4 in Japan; 3 in Switzerland; 2 in France; 2 in Vietnam and 1 in Spain, Hungary, UAE, Kuwait, Thailand, Indonesia, Israel and Canada.

Source: Marvel Studios’ “Captain Marvel” to be Released in ScreenX