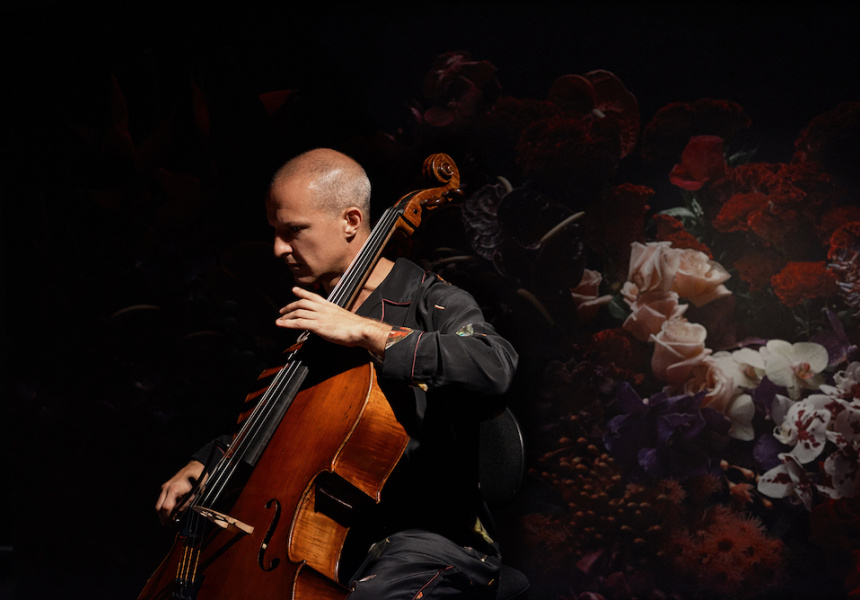 Classical Music, but Not as You Know It: The Sydney Art Quartet Works With a Top Florist on a Multi-Sensory Show

Past shows have seen audiences blindfolded; a naked composer posing for a painter; and musicians electrocuted – yes, really – as they played. This time around, the quartet collaborates with Grandiflora’s Saskia Havekes.

James Beck isn’t afraid to push boundaries. In fact, it seems he’d be happy to tear them down outright. For a classical musician he’s refreshingly out there.

You need only look at some of the inspired collaborations Beck and his Sydney Art Quartet (SAQ) have worked on over the years: in Blind Trust the audience was blindfolded to heighten their hearing as harpsichordist Erin Helyard performed concertos from Mozart and Bach, accompanied by the quartet. In Butt Naked Salon, concertgoers watched as Archibald-winning artist Wendy Sharpe painted composer Andrew Batt-Rawden’s form while he stood starkers before them, as the SAQ performed one of his compositions. And in Shocking Cliches, two of the musicians were hooked up to electrodes controlled by the audience and electrocuted – yes, electrocuted – as they performed, in an experiment about free will in conjunction with psychologist and composer Michaela Davies.

It’s classical music, but not as you know it.

Now Beck and the SAQ are enhancing our aural experience by exploring one of our most evocative senses – scent – in collaboration with Saskia Havekes, the Sydney floristry doyenne behind Grandiflora. Havekes will not only surround the audience with a sublime, soothing forest of flowers, she’ll also pair each musical work with one of her signature fragrances. Attired in bespoke Jac & Jack, the quartet will perform Remember Me in a stunning private Woollahra ballroom before a crowd sipping Perrier Jouët.

Beck’s raison d’etre is simple enough: “We want to take people deeper into the music or deeper into their own interior life, and we think we can do that best by stimulating more than one sense.” Beck is the quartet’s founder, artistic director and cellist.

His fellow musicians are viola player Andrew Jezek, Australian-French violinist Thibaud Pavlovic-Hobba and violinist Anna Albert (who is this writer’s cousin). The quartet has performed more than 100 times since it was formed in 2015, often alongside other renowned Australian creatives, including artists Bill Henson and John Olsen; chef Brent Savage (Monopole, Bentley); and opera singer Taryn Fiebig.

Beck insists his creative collaborations are not avant-garde but a return to the salons of the belle époque era in Europe, in the late 19th and early 20th centuries, where groups would gather to appreciate music in a range of relaxed and immersive ways.

“In many parts of Western cultures we silo art forms, whereas [previously] they didn’t divorce poetry from visual art or music or fashion,” says Beck. “By using something more than music it makes music more powerful.”

Remember Me is not the first time SAQ has collaborated with Havekes. In The Flower Whisperer, directed by the indomitable Tony Assness, the quartet performed music of the French impressionists in a breathtaking night garden created by Havekes in partnership with fashion label Romance Was Born.

But Havekes and Beck’s relationship goes back even further; Beck lived above Grandiflora’s Potts Point store for 10 years, and the pair became fast friends. In 2020 they collaborated on the podcast series Cross Pollination.

For Remember Me, Havekes will create a parterre-style gardenscape inspired by the work of her friend and renowned landscape designer John Bangay, which she’ll decorate with flowers. “It’s very white, crisp and clear, very apt for this time, and very green,” Havekes tells Broadsheet. “I want it to be a beautiful, sensitive approach, nothing too heavy.”

Each of the six pieces of music will be paired with one of Havekes’s signature fragrances. Her new eau de parfum, The Namesake, has inspired a piece by Aria Award-winning composer Elena Kats-Chernin, and this performance will be its world premiere.

“To have a piece of music dedicated to that is beyond [comprehension], Elena is my favourite female composer, [and] a great source of encouragement and inspiration, so I was incredibly touched,” Havekes says.

Audiences will each receive six separate fragrance cards and Havekes will explain each scent before Beck describes the music they’re about to hear.

“Remember Me is a more refined project, we’re certainly not electrocuting anyone,” Beck says. “Saskia is a creative hero of mine and this is an homage to her as well.”

For her part, Havekes is hoping to give Beck, and audiences, some much-needed respite from the darkness of 2020.

“During Covid I heard James say many times he would love to perform in a garden and I really wanted to give him that somehow, and that room lends itself to that,” she says. “It’s called a ballroom but feels like it could be a conservatory. It will be really enjoyable for people to be submerged, like sitting and watching a concert in an abstracted garden.”

Sydney Art Quartet’s Remember Me will be held in a private Woollahra ballroom from February 5 to 7. Tickets are still available for the 3pm performance on February 7 here.

Source: Classical Music, but Not as You Know It: The Sydney Art Quartet Works With a Top Florist on a Multi-Sensory Show