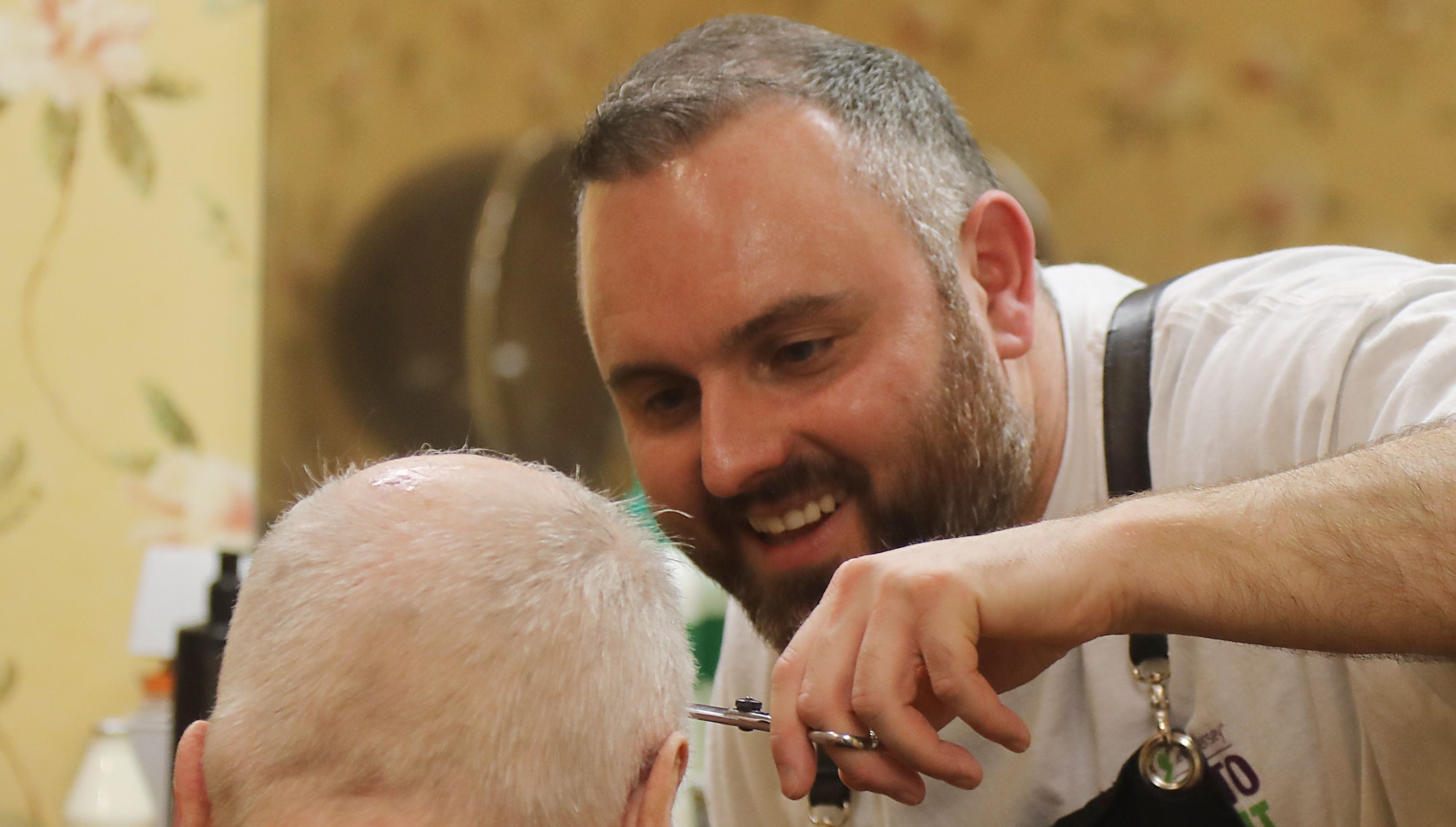 Tunes from The Great American Songbook, the scent of citrus aftershave and old-fashioned tools of the trade transformed an assisted-living beauty parlor for women into an old-fashioned barbershop to trigger memories and calm men with dementia, if just long enough for a shave and a haircut.

Against the backdrop of floral wallpaper and a row of hard bonnet hair dryers, Lenny White, the “Dementia-Friendly Barber” from Ireland, engaged the men in conversation on war, sports and life, reminiscent of those that took place in the barber shops of their youth.

“Going to a barbershop is something that you enjoy as men, and I wanted to bring that back,” White said. “I want to create a setting they are familiar with.”

Howard Smith squinted and watched closely as White asked how he liked his hair and beard cut. Not a hard question for many, but this wing of the Chelsea at Montville, where Smith lives, is reserved for those with the most severe cases of memory loss.

Memories in Alzheimer’s patients can be jogged by smells and music, said Kenneth Zaentz, president of Alzheimer’s New Jersey.

“The nerve cells in the brain are dying. The brain is literally shrinking,” Zaentz said of the neurological disease that attacks short-term memories first, then long-term ones. “We want to do as much as possible to continue to stimulate those memories.”

When Leroy Whitman took his turn in the barber’s chair, the 89-year-old’s memories were triggered by the Irish music coming from White’s boombox. He talked of the trip to the Emerald Isle he took with his wife many years before she died. He remembered drinking Guinness and kissing the Blarney Stone.

White said after he volunteered to cut hair at an assisted-living facility in Northern Ireland, he came to realize there was a real need for this special service to men with dementia.

He said the men connect to him. In fact, he said, the need is so great that this is now his full-time job. Every day he loads his car with his tools, a barber pole and his tunes and travels to nursing homes, private homes and anywhere there is a man who might benefit from his newfound skills.

There are a lot of unknowns when it comes to dementia, like why it affects some people and not others, or what causes it to spread, Zaentz said.

“We know that people can still respond to music. We know that they can still respond to smell, and things that were familiar in the past can really stimulate people who have dementia and help engage them and bring them back to a time that was,” Zaentz said. “It is always important to connect. They may not remember your name, but you can still have a loving relationship with the person with the disease if you connect with them at the place they are.”

I wouldn’t call myself a leader. I don’t want to lead people, I want to tempt them, I want to create a new world for them, just for that very small moment, when they are losing themselves in my music. I want to inspire them