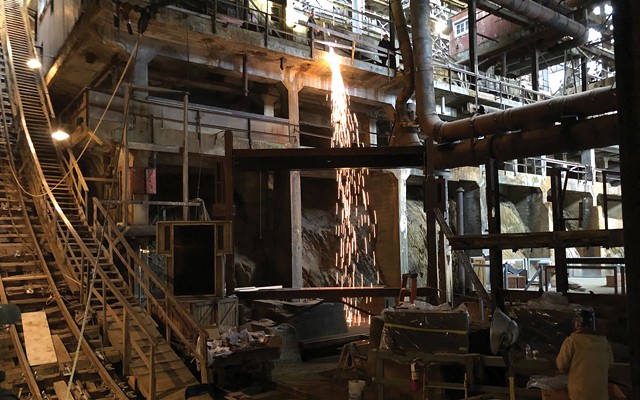 KIRSTIN CLAUSEN knows mining history isn’t exactly the sexiest topic for tourists, but the executive director of the Britannia Mine Museum is banking on an ambitious interactive show launching this summer to paint the historic mill in a new light.

“I think we can be honest: Mining can be a tough sell to turn it into a tourist attraction,” Clausen said. “We hope people will feel a connection to the story.”

That particular story is deeply rooted in the history of British Columbia. Once the most productive copper mine in the British Empire, the Britannia mill today is a national historic site and museum that welcomes visitors from around the globe.

In an effort to better appeal to modern audiences, staff at the museum dreamed up the concept for BOOM!, a multi-sensory, interactive show that brings the historic Mill No. 3 to life through “sound, smell, shaking and noise,” Clausen explained. In operation from 1921 to 1974, the ore mill served as the focal point of Britannia Beach, and according to Clausen, has many stories to tell.

“The show takes you on a bit of a rollercoaster,” she said. “There’s a little bit of teaching and you have to learn some things, which is pretty museum-like. But we’ve injected some humour and then we’ve layered the special effects on, and I think we’ll make some people cry. I think people will run the gamut of emotions—not everyone, but there will be a lot of emotional connection to the story of the mill and the community of Britannia Beach.”

The culmination of a 10-year process from inspiration to completion, BOOM! has been developed primarily by Vancouver-based video-production company Vista Collaborative Arts, which has produced themed attractions around the world, including The Sleeping Giant for Mexico’s Museo del Acero. That show was created as part of the revitalization of a former iron-smelting blast furnace in Monterrey, which also holds a special place in the hearts and history of the local population.

Also tapped to contribute to the project is Dynamic Attractions, which has worked on several popular theme parks such as Universal Studios Florida and Disneyland. The Port Coquitlam-based company has engineered and fabricated the museum’s movable skip for the show, which demonstrates how mining equipment was once hauled down the massive, 20-storey mill building.

Unsurprisingly, there were numerous logistical challenges that went into developing a multimedia attraction on the site of the 96-year-old mill, but the main two, Clausen said, were to preserve the historic rail and stairs of the original building, as well as housing all the necessary AV technology in the unheated mill.

“The building is essentially like being outside. It doesn’t have heat. It’s just like a shell,” she noted. “So now you start adding expensive electronics, computers and special effects, but they have to function as though they were outside.

“I’m proud we found solutions to both of those challenges.”

BOOM! and the additional rehabilitation of the museum’s infrastructure were made possible thanks to a $1.4-million federal grant, as well as another $2.6 million raised by the museum.

The show is set to launch this summer. The Britannia Mine Museum will have additional details on the opening in the coming weeks. To learn more, visit britanniaminemuseum.ca.