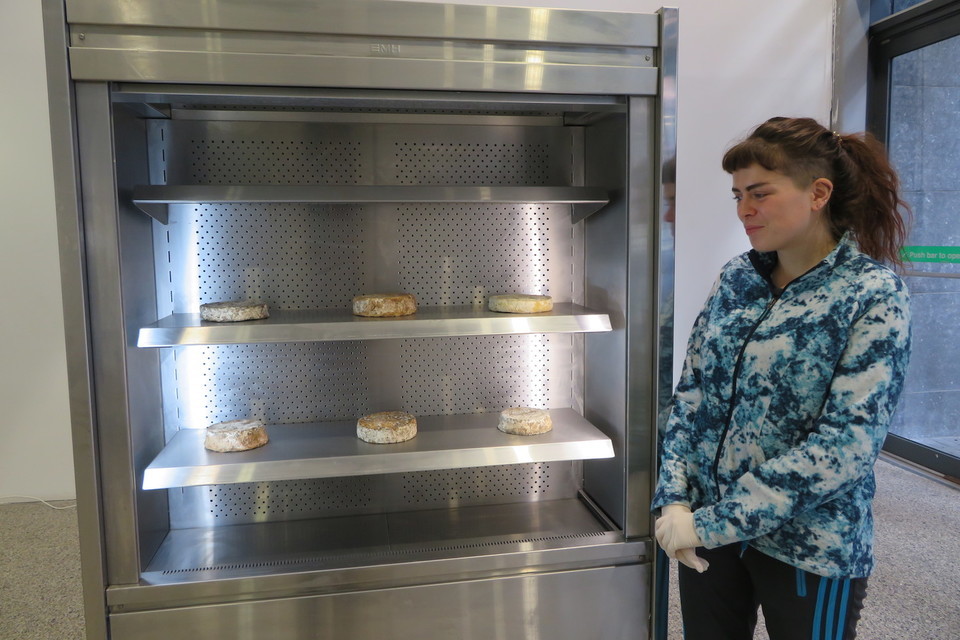 Black-Mould Brie, Anyone? An Art Project Comes to the City | Dublin Inquirer

By msensory team15/11/2019No Comments
Breaking open a styrofoam box, artist Avril Corroon throws her head back as a strong, feet-like smell wafts up from inside.
Corroon is kneeling on the floor of the LAB Gallery on Foley Street last Friday, the new home for her exhibition on artisan cheeses with a sinister backstory.
She’s in the process of setting up for the show: carefully unpacking boxes, with gloves on, and wiping down commercial refrigerators.
Within the boxes are the results of Corroon’s year-long project, transported from the UK via Holyhead for her exhibition here in the LAB Gallery which opens Thursday.
The London-based artist took samples of mould from people’s rented accommodation in London – and later Dublin – and some workplaces, to make deceptively delicious-looking food.
Spoiled Spores juxtaposes the wealth of someone who might buy a high-end good with the poor conditions people contend with, she says.
But these convincing wheels of cheese are, she says, “toxic”.
Corroon says the exhibition plays on the alluring, but “kind of disgusting” smell of a gourmet cheese that the rich might eat. “To me, it’s sort of a trap. I think of the cheeses as sort of a trick or lure for a landlord,” she says.
It was also a way of considering how accepted it is that people live in these conditions. “We accept damp, we accept leaky pipes and mildew and broken windows,” she says.

Spoiled Spores was the final project for Corroon’s MA at Goldsmiths, University of London.
Corroon says she sourced the mould over a year in several ways – from people in her own network, but also from strangers online, on Facebook classified ad groups for people giving away their stuff for free.
People she met had repeatedly complained to their landlords about the mould problem to no avail, says Corroon. “They were really frustrated.”
Armed with gloves, a mask and sellotape to collect the samples, she was sometimes met with confusion. “Some people thought I would scientifically be able to help them. Which is very sad.”
She visited someone’s workplace too, where mould was growing in the cellar that a person had to walk down to throughout their shift.
She remembers the worst apartments she saw. “There was this white, crystally mould that was underneath somebody’s bed. It was really terrible.”
In Dublin, she encountered toxic black mould that gave her a headache, despite wearing protection, she says.
One tenant had been told by her landlord that the mould growing behind her bed was “dead”, says Corroon.
“I was like, her landlord had no authority in knowing whether this mould was alive or not!” Corroon says.

Using the “miracle of YouTube”, Corroon learned the fine art of cheesemaking: putting the mould in fresh milk, heating the vat, cutting the curd, and ageing the finished product.
It was laborious, says Corroon. “It’s a really, really long process. You really feel how old cheesemaking is.”
It was also trial-and-error, with rookie mistakes at the beginning.
“For example, I didn’t have salt and thought since no one was eating them I didn’t need salt,” she says. “Then I felt like an idiot: of course, salt is a preservative.”
The studios in college overlooking a creek caused problems. “I had a lot of fly issues,” she says, wincing. “I really saw the belly of the beast when I saw a maggot coming out of the cheese.”
It took six months of trawling through Gumtree and eBay to find free fridges, she says, taking them off the hands of cafes and business owners.
Patting the side of one of her gleaming commercial fridges in the gallery, she says: “This is like my sports car.”
The whole process is captured in a short film Corroon produced for the exhibition. It shows how the cheese is made, interspersed with footage of the apartments she visited and shots of the mould.
There are also beautifully composed menu cards with a photo of each of the finished cheeses surrounded by grapes, chorizos, almonds, and other decorative foods.
Each is named after a tenant, with the location, a description of the mould and the annual rent or someone’s wage in the ingredients list.

The issue of precarity is something Corroon touches on a lot.
During her two-year degree, she worked multiple jobs to support herself, including as a waitress in a gallery restaurant. This served as the inspiration for the second film she’ll have screened at the LAB Gallery: Latte Art.
“It’s a very frustrated film, whingy,” she says, laughing. Corroon compares her experience of waiting tables at a high-end gallery to that of an aspiring actor who moves to Los Angeles.
To make the film, she secretly recorded herself waiting tables, covertly attaching an iPhone to her belt.
In the reels, she brings out the food, interacts with patrons, and even eats leftovers as she narrates her experience.
“I go through this romanticised idea of the artists sitting in a cafe and coming up with their genius ideas,” Corroon says. “When the reality is a lot of artists are just working, or some of them aren’t.”
She says she’s excited to bring her work, Spoiled Spores, to Ireland in particular, where the “context is more severe”.
“It’s going to be shown over the Christmas period, which is a very sensitive time to be discussing housing in Ireland,” she says.
Originally from Ireland, the worst place Corroon says she lived in was in Dublin 8.
“The work holds itself as a kind of evidence for people,” she says. “I’m sure a lot of people will relate to it or have empathy.”
Spoiled Spores runs from 14 November to 9 January at The LAB Gallery on Foley Street.