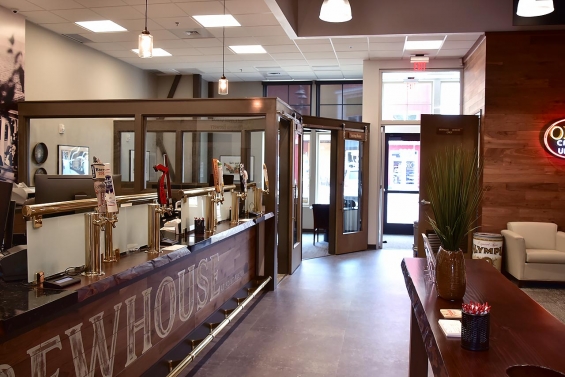 A financial institution in Washington state has created an unusual multi-sensory branch that blends banking with beer — from taps in the “teller bar” to the smell of hops infused through “scent generators.”

For years, former banking offices have been turned into steakhouses, bistros, furniture stores, and bars. In Manhattan, for example, the old Bank of the Metropolis became the Blue Water Grill, and Bowery Savings Bank became the über-luxe Cipriani restaurant. In tiny Hawley, Pennsylvania, the former headquarters of a defunct local bank became “Torte Knox.” Something about vaults seems to inspire culinary artists.

O Bee Credit Union has flipped this trend around. Instead of closing branches and letting someone else turn them into bars and restaurants, the $300 million institution based in Washington State is using a brewpub design to revamp its branch experience.

The credit union was originally founded to serve employees of the Olympia Brewing Co., but changed its name to “O Bee” (a phonetic abbreviation for the initials in “Olympia Brewing”) in an effort to serve a broader audience after the brewer shuttered operations.

In one brewhouse location, O Bee Credit Union gutted and revamped a branch acquired from KeyBank. The latest, in an up-and-coming suburban neighborhood, was built from scratch.

Lee Wojnar, VP/Marketing for O Bee, says the credit union has tweaked the concept with each location, taking experiential marketing in branch banking in new directions — blending a little bit of Disney with a nod to history, heritage and hops.

When you first walk into O Bee Credit Union’s newest branch, you feel as if you had walked into the tasting room of a brewery. The design engages multiple senses.

First, there is the visual. The teller line features brass rails and accents just like you’d find in a typical neighborhood hangout. But the allusions to the credit union’s brewing roots don’t stop there. Beer tap handles bearing the names and logos of craft brews line the front of the “teller bar.” No free brew, unfortunately, but Wojnar says one beer tap in the branch dispenses water — pull all you want.

Raw brick walls — found in the original brewery that inspired the branch — and corresponding signage evokes the “pub” feeling. Outside there are neon signs that pick up the old Olympia “lucky horseshoe” logo. A barroom style chalkboard promotes the specials of the day — not bangers and mash or sausage rolls, but “piping hot auto loans,” RV loans “with a side of adventure,” and high annual percentage yields “on tap.” Photos of the old Olympia Brewery and its workers, beer barrels, and more punctuate the experience.Then there’s the auditory. In the branch’s ATM lobby, there are clinking sound effects, recorded in a brewery. It’s the sounds of bottles rattling along conveyors through a bottling room, entering empty and leaving the Olympia brewery, in the mind’s eye.

Then add in an aroma. Wojnar says, with a touch of pride, that the theme “goes to the nose” with “scent generators” that fill the room with the faint smell of hops. A few years back some financial institutions began baking cookies in their lobbies for the homey smell it left. Others installed espresso machines to evoke the sensation of a local café. Hops is a new twist on the olfactory experience — most certainly a first in banking.

O Bee — now serving over 27,000 members across Washington — began as a true “mom and pop” credit union back in 1955. It was founded by Ted McGill, a worker in “Bottle House A” at the Olympia Brewery, after learning about credit unions. He eventually jawboned fellow workers into getting one started for brewery employees.

In the early years, he ran the institution out of his home, reconciling the day’s transactions with the help of his wife. Eventually Olympia Brewery provided space on its premises.

For the few who have complained about a financial institution making itself over to look like a bar, Wojnar says the credit union’s response has been along these  lines: “We’re not celebrating alcohol. We’re celebrating the past. We were founded in a bottle house in a brewery. We’re not going to deny our history.”

Wojnar believes there’s another natural connection here. “If you really think of a pub, it’s a meeting place, a place for an exchange of ideas.”

Actually, historically some financial institutions in the U.S. began as the credit-granting or straight lending activities of entrepreneurs whose main earnings initially came from other businesses — general stores, even bars. Banking and booze go a ways back, you might say.

O Bee’s beer connection goes beyond the two brewhouse branches, the look and feel of which will eventually be extended to the credit union’s other locations.

Several other beer brands have historical meaning in the region, including Rainier Beer. These brands adorn both O Bee banking cards and t-shirts. The shirts can be bought by branch visitors — members or not — with proceeds going to charity. Employees may wear them on Fridays.

For cardholders who don’t want to use a beer-branded card the credit union also provides other designs.

O Bee has enjoyed several years of double digit growth, according to Wojnar, and he says the marketing effort has helped O Bee stand out more among young people and reduce the average age of members.

One connection in that regard is among the employees of the many craft brewers in the state. Part of how O Bee gains visibility is through associate membership in the Washington Brewers Guild, according to Wojnar. It is the only credit union member.

“Our membership creates touchpoints,” says Wojnar. For instance, there’s the local annual Artesian Brewfest, which exposes the O Bee brand to a younger audience through the credit union’s festival sponsorships.