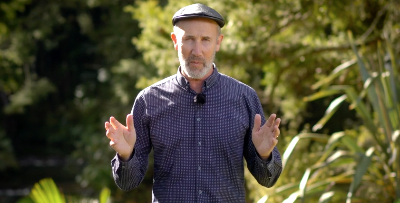 The rising tide of anti-Semitism around the world, including New Zealand, means that the re-telling and preservation of Holocaust survivors’ stories matters more and more…writes Miriam Bell.

That’s why the work of the Shadows of Shoah Trust – which held the New Zealand launch of its new exhibition, River of Tears, at the Auckland Hebrew Congregation – is critically important.

River of Tearsis created by photographer Perry Trotter and interviewer Sheree Trotter and, like their earlier exhibition Shadows of Shoah, it presents the stories of Holocaust survivors in a unique, multi-media format.

Taking its name from the Hebrew Prophet Jeremiah’s lamentation over the destruction of his people*, River of Tears builds on the success, concepts and stories of Shadows of Shoah.

But it takes multi-sensory immersive engagement to a new level by using kinetic elements, like bricks and smoke, and railway sounds alluding to the railway network that played a crucial role in the Holocaust.

These elements are interwoven into a presentation featuring excerpts of survivor stories, black and white photos of the survivors telling their stories and original musical compositions.

The result is evocative, powerful and incredibly poignant and moving.

It also firmly places real faces and a crucial human dimension into current day understanding of the Holocaust – which is often swamped by the magnitude of the statistics involved.

At the River of Tears launch, the importance of this was emphasised by a diverse range of speakers.

Israel Institute of NZ director David Cumin said that the stories of Holocaust survivors bring meaning to the statistics.

“Recalling these stories is necessary because you can’t understand if you can’t remember. And if you don’t remember you are powerless to prevent it happening again.”

Cumin said this is particularly important in the face of what seems to be a rising tide of anti-Semitism around the world which New Zealand is not immune from.

To this end, we must preserve the lessons of the past before they are forgotten, he said.

“Shadows of Shoah is a great example of love, art, faith and life. The respect, concern and compassion that has gone into this exhibition is what protects us from anti-Semitism.

“River of Tears also respects the memories of the Holocaust and protects the dignity of its victims. We are indebted to Perry and Sheree for not being indifferent.”

Shadows of Shoah Trust board chairman Bob Narev, who is himself a Holocaust survivor, along with Expressions Whirinaki Arts Centre director Leanne Wickham and Property Institute chief executive Ashley Church, who are both on the Trust board, were among the speakers at the launch.

They too emphasised the dire need to ensure the stories of Holocaust survivors are captured, preserved and retold – particularly to members of younger generations who, all too often, haven’t been taught, and don’t know, about the reality of the Holocaust.

They all paid tribute to the work of Perry and Sheree Trotter, who have been photographing and interviewing Holocaust survivors in New Zealand, Australia, Israel and the USA since 2008.

But they also all spoke of the need to actively support the exhibitions and the work of the Shadows of Shoah Trust in every way possible, including with donations.

Since then the exhibition has toured 19 art galleries, museums, and public spaces throughout New Zealand, as well as more overseas.

It will now be heading to Europe, with Wickham announcing at the launch that the Trust has been invited to show the exhibition in Croatia, at the Jewish International Film Festival in early 2019.

*O wall of the daughter of Zion, let your tears flow like a river day and night.