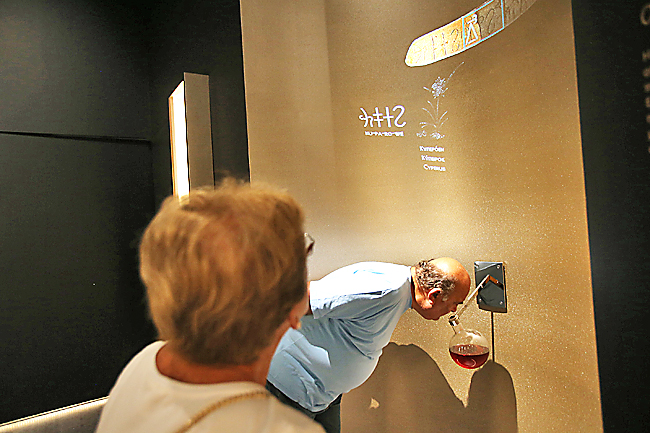 For the first time, an ancient scent takes its place among the treasure of antiquities next to sculptures of Eros and Aphrodite at the National Archaeological Museum in Athens.

The primitive scent of rose revived from antiquity is among the highlights of the temporary exhibition Countless Aspects of Beauty to celebrate the museum’s 150th anniversary.

Following the methods of ancient Greek perfumers, the scented oil, called the Rose of Aphrodite, invites the visitors to experience the countless aspects of beauty not only through their sight, but their smell as well.

The world of fragrance takes a distinct place in antiquity. Closely linked to the Greek ancient deities Aphrodite, perfumes and scented oils are mentioned in ancient myths as an indispensable accessory for gods and mortals when preparing for special appearances.

Greeks also thought that perfume was a gift from the deities, and many perfumes were named after Greek deities.

For that reason, the museum collaborated with the Greek natural cosmetics company Korres and their laboratory to create perfumes inspired from information recorded in the ancient sources.

“It was a challenge and an honour as Greeks and scientists, and for our company that work with Greek herbs. It was a magical project,” Lena Korres, co-founder of the company that led the research, told Xinhua.

In the journey of experimental archaeology, they tried to decode the fragments of information found on Linear B tablets for record keeping during the Mycenaean Period, relating to the ingredients ordered for the palace’s perfumers.

“We had our sources. We travelled to different libraries. We found tablets from the Mycenaean palaces, Linear B ideograms, and with the works of Dioskourides and Theophrastos, along with later studies from modern researchers, we compound the elements on how they created the scent in ancient Greece,” Korres added.

The Greek scientist and philosopher Theophrastos, considered the father of botany for his works on plants, wrote a book called De Odoribus, or Concerning Odours that delves greatly into the use of fragrance in ancient Greece. Dioskourides, a Greek physician, pharmacologist and botanist, was the author of De Materia Medica (On Medical Material), a five-volume Greek encyclopaedia about herbal medicine and related medicinal substances.

The journey to antiquity was not an easy one according to Lena Korres.

“The second difficulty we had to deal was to find all the components. We travelled to the Greek islands, to Amorgos island to find nutsedges (cyperus), we collected wild olive oil from Crete, red wine, alkanna root also from another island. We gathered all the components and then went to the lab,” she said.

The lab started working on reviving the scents of antiquity, remaining loyal to the methods of ancient perfumers.

“There the procedure we revealed step by step was amazing, because it was a chemical method that is not known in our times, it has not been preserved and we had to recompose it,” she explained.

They based on oil formulas referenced in the works of Dioskourides and Theophrastos and later studies focusing on the ancient technique of aromatic oil production.

“We started the infusion of the wild olive oil, we mixed it with nutsedges. Then we flavoured the formed oil with rose pedals and colourised it with the root of alkanna,” Korres explained.

According to Korres, the final scent is unique, and it takes one back to something primitive and fresh which is the rose.

Besides rose, two more scents will be unveiled and take their place in the museum in the coming months, the coriander and the sage.