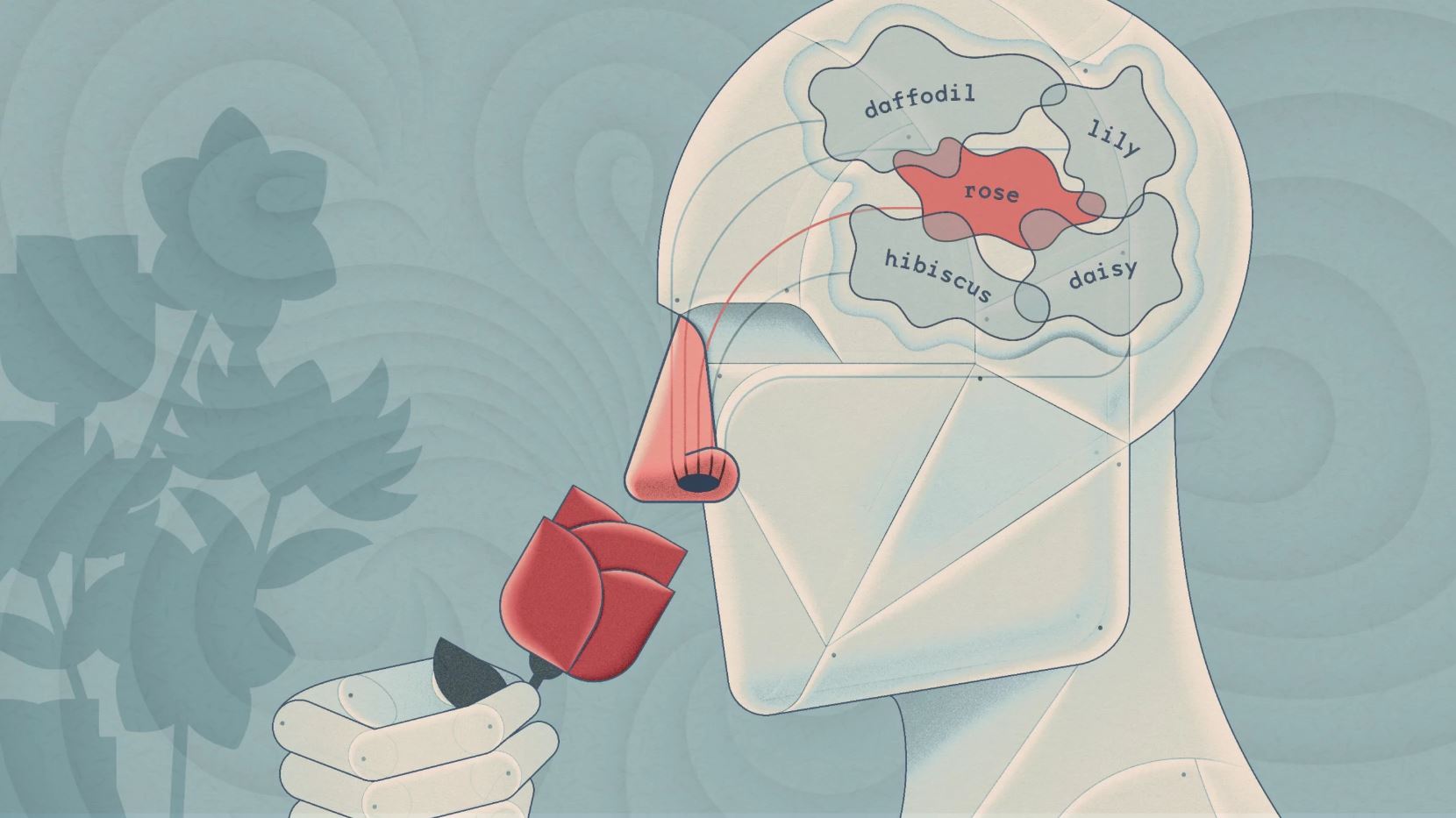 Efforts to build a better digital “nose” suggest that our perception of scents reflects both the structure of aromatic molecules and the metabolic processes that make them.

Alex Wiltschko began collecting perfumes as a teenager. His first bottle was Azzaro Pour Homme, a timeless cologne he spotted on the shelf at a T.J. Maxx department store. He recognized the name from Perfumes: The Guide, a book whose poetic descriptions of aroma had kick-started his obsession. Enchanted, he saved up his allowance to add to his collection. “I ended up going absolutely down the rabbit hole,” he said.

More recently, as an olfactory neuroscientist for Google Research’s Brain Team, Wiltschko used machine learning to dissect our most ancient and least understood sense. Sometimes he looked almost longingly at his colleagues studying the other senses. “They have these beautiful intellectual structures, these cathedrals of knowledge,” he said, that explain the visual and auditory world, shaming what we know about olfaction.

Recent work by Wiltschko and his colleagues, however, is helping to change that. In a paper first posted on the biorxiv.org preprint server in July, they described using machine learning to tackle a long-standing challenge in olfactory science. Their findings significantly improved researchers’ ability to compute the smell of a molecule from its structure. Moreover, the way they improved those calculations gave new insights into how our sense of smell works, revealing a hidden order in how our perceptions of smells correspond to the chemistry of the living world.

When you inhale a whiff of your morning coffee, 800 different types of molecules travel to your smell receptors. From the complexity of this rich chemical portrait, our brains synthesize an overall perception: coffee. Researchers have found it exceptionally difficult, however, to predict what even a single molecule will smell like to us humans. Our noses host 400 different receptors for detecting the chemical makeup of the world around us, and we are only beginning to fathom how many of those receptors can interact with a given molecule. But even with that knowledge, it isn’t clear how combinations of odor inputs map onto our perceptions of fragrances as sweet, musky, disgusting and more.

“There was no clear model that would give you predictions for what most molecules smell like,” said Pablo Meyer, who studies biomedical analytics and the modeling of olfaction at IBM Research and was not involved in the recent study. Meyer decided to make the iconic structure-to-scent problem the focus of IBM’s 2015 DREAM challenge, a computing crowdsourcing competition. Teams competed to build models that could predict a molecule’s odor from its structure.

But even the best models couldn’t explain everything. Peppered throughout the data were pesky, irregular cases that resisted prediction. Sometimes, small tweaks to a molecule’s chemical structure yielded a totally new odor. Other times, major structural changes barely changed the odor.

A Metabolic Organization for Smells

To try to explain these irregular cases, Wiltschko and his team considered the requirements that evolution might have levied on our senses. Each sense has been tuned over millions of years to detect the most salient range of stimuli. For human vision and hearing, that’s light of wavelengths from 400-700 nanometers and sound waves between 20 and 20,000 hertz. But what governs the chemical world detected by our noses?

“The one thing that’s been constant over evolutionary time, at least from a very long time ago, is the core metabolic engine inside of every living thing,” said Wiltschko, who recently left Google Research to become an entrepreneur-in-residence at Alphabet’s venture capital subsidiary, GV.

Metabolism refers to the sets of chemical reactions — including the Krebs cycle, glycolysis, the urea cycle and many other processes — that are catalyzed by cellular enzymes and that convert one molecule into another in cells. These well-worn reaction pathways define a map of relationships among the naturally occurring chemicals that waft into our noses.

Wiltschko’s hypothesis was simple: Perhaps chemicals that smell similar are not just chemically related, but biologically related as well.

To test the idea, his team needed a map of the metabolic reactions that occur in nature. Fortunately, scientists in the field of metabolomics had already constructed a large database that outlined these natural chemical relationships and the enzymes that precipitate them. With this data, the researchers could pick two odorous molecules and calculate how many enzymatic reactions it would take to convert one to the other.

For comparison, they also needed a computer model that could quantify how various odorous molecules smell to humans. To that end, Wiltschko’s team had been refining a neural network model called the principal odor map that built on the findings of the 2015 DREAM competition. This map is like a cloud of 5,000 points, each representing one molecule’s scent. The points for molecules that smell similar cluster together, and ones that smell very different are far apart. Because the cloud is much more than 3D — it holds 256 dimensions of information — only advanced computing tools can grapple with its structure.

The one thing that’s been constant over evolutionary time, at least from a very long time ago, is the core metabolic engine inside of every living thing.

The researchers looked for corresponding relationships within the two data sources. They sampled 50 pairs of molecules and found that chemicals that were closer on the metabolism map also tended to be closer on the scent map, even if they had very different structures.

Wiltschko was astonished by the correlation. The predictions still weren’t perfect, but they were better than any previous model had achieved with chemical structure alone, he said.

“That didn’t have to happen at all,” he said. “Two molecules that are biologically similar, like one enzyme catalysis step away, they could smell like roses and rotten eggs.” But they didn’t. “And that is crazy to me. It’s beautiful to me.”

The researchers also found that molecules that generally occur together in nature — for example, the different chemical components of an orange — tend to smell more similar than molecules without a natural association.

The findings are “intuitive and elegant,” said Robert Datta, a neurobiologist at Harvard Medical School and Wiltschko’s former doctoral adviser, who was not involved in the recent study. “It’s like the olfactory system is built to detect a variety of [chemical] coincidences,” he said. “So metabolism governs the coincidences that are possible.” This indicates that there’s another feature besides a molecule’s chemical structure that matters to our noses — the metabolic process that produced the molecule in the natural world.

“The olfactory system is tuned for the universe it sees, which are these structures of molecules. And how these molecules are made is part of that,” said Meyer. He praised the cleverness of the idea of using metabolism to refine the categorization of scents. Although the metabolism-based map doesn’t drastically improve on structural models, since a molecule’s metabolic origin is already closely related to its structure, “it does bring some extra information,” he said.

The next frontier of olfactory neuroscience will involve the odors of mixtures instead of individual molecules, Meyer predicts. In real life, we very rarely inhale just one chemical at a time; think of the hundreds wafting from your coffee mug. Right now, scientists don’t have enough data on odorant mixtures to build a model like the one for pure chemicals used in the recent study. To truly understand our sense of smell, we’ll need to examine how constellations of chemicals interact to form complex odors like those in Wiltschko’s perfume bottles.

This project has already changed how Wiltschko thinks about his lifelong passion. When you experience a smell, “you are perceiving parts of another living thing,” he said. “I just think that’s really beautiful. I feel more connected to life that way.”

Editor’s note: Datta, an investigator with the Simons Collaboration on Plasticity and the Aging Brain and SFARI, receives funding from the Simons Foundation, which also sponsors this editorially independent magazine.