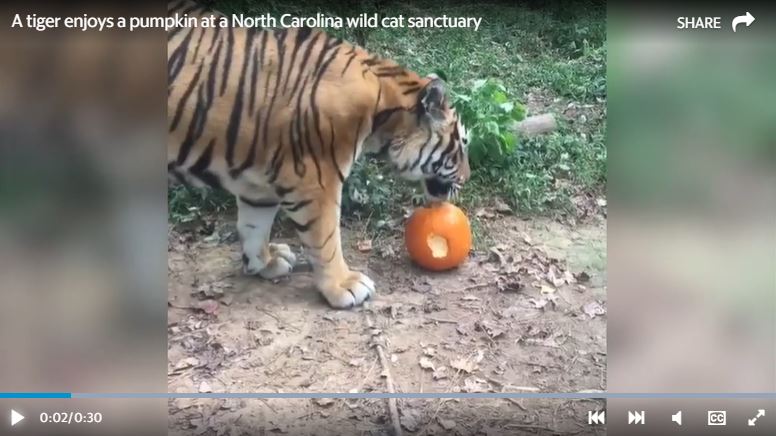 By msensory team08/10/2019No Comments
Emerson, a tiger at Carolina Tiger Rescue in Pittsboro, enjoys playing with a pumpkin in a video taken on Monday. The pumpkin is sprayed with Calvin Klein “Obsession,” which attracts tigers. BY CAROLINA TIGER RESCUE

Apparently humans aren’t the only ones excited for fall weather in North Carolina.

A video posted on Facebook by Carolina Tiger Rescue, a wild cat sanctuary in Pittsboro, on Monday shows Emerson the tiger celebrating the season by playing with a pumpkin.

“We are very excited to have some cooler weather this past week as are the animals,” the group wrote.

In the video, Emerson approaches the pumpkin and sniffs it before lying down on it. He cuddles with the pumpkin for a bit and then rolls over and kicks it around.

The pumpkin was doused in Calvin Klein’s Obsession perfume, the group wrote on Facebook, which attracted Emerson to the pumpkin.

Most of the tigers at the sanctuary like Obsession because it has a musky scent that’s appealing to them, according to Michelle Meyers, spokesperson for Carolina Tiger Rescue.

The “musky pheromone,” known as Civetone, makes tigers “rub all over the scent” in an effort to mark their territory, she said last year.

And the video shows Emerson doing just that.

Meyers told The News & Observer last year that animals probably like musky scents so much because they come from “extracts in mammals.”

In the fall, the cats are given painted pumpkins stuffed with raw meat doused in their favorite scents, which vary among species, as an enrichment for them, Meyers told The News & Observer in 2018.

“We leave these in the enclosures for the animals to explore, pounce on, rub on,” she said. “It’s really quite cute to watch them play like house cats would with catnip. They are in absolute heaven.”

Source: A tiger plays with a pumpkin doused in perfume in NC: video | Raleigh News & Observer