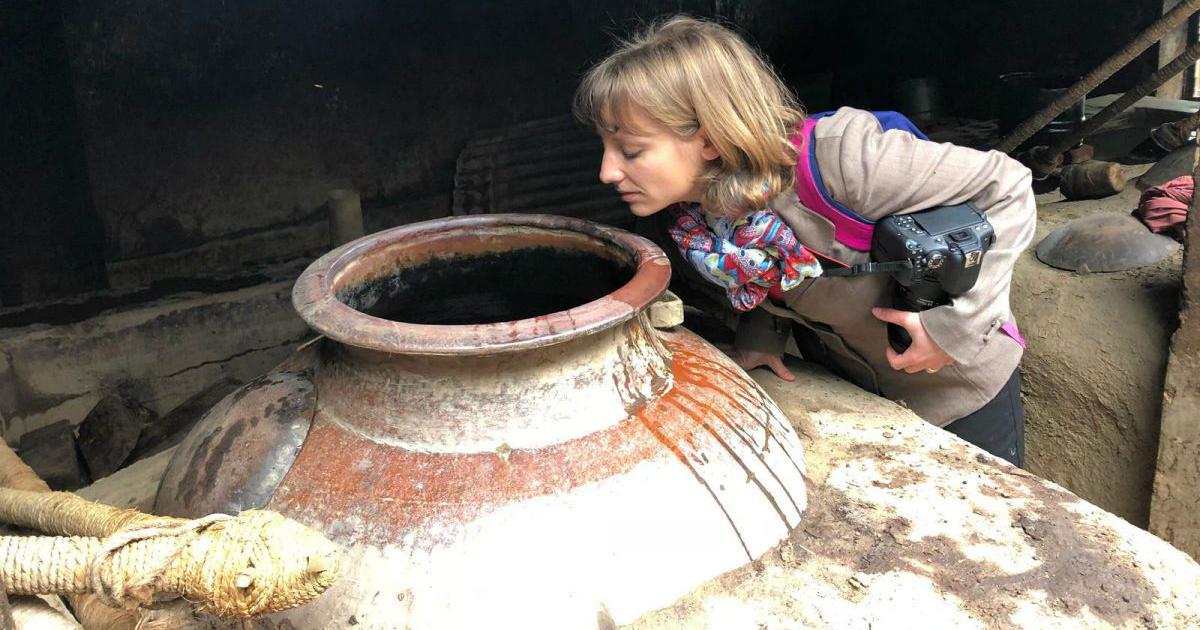 A perfumer and an artist from Switzerland are distilling smells of India into ‘smellscapes’ | scroll.in

Driven by their passion for fragrances, Maeva Rosset and Giovanni Sammarco arrived in the North Indian city of Kannauj in February. Also called ittar ki nagari, or city of perfumes, the destination is famous for its mitti attar, a scent that captures petrichor. Kannauj has been making mitti attar since the time the Mughals established their supremacy in North India, and Sammarco and Rosset wanted to witness the centuries-old process first-hand. What they saw left them enthralled.

Mitti attar is created using a technique that involves baking clay in a kiln, steaming it in copper cauldrons heated on cow-dung fire, and then collecting the resultant vapours over oil. “I was astonished to find that such primitive techniques are still used to capture this unique fragrance,” said Sammarco, a Swiss perfumer. “The perfume industry is so commercialised now that a lot of the joy of perfuming is lost in the hurry [to make] something that sells.” According to Rosset, this “unique method” of extraction standardises the mitti attar. “It’s nice this way, [there’s] something more real about the perfume you get at the end,” said the 29-year-old visual artist.

Sammarco and Rosset, who live in Bern, Switzerland, were in India to create smellscapes, or olfactive landscapes: installations that recreate a place or specific memories through visual as well as olfactive methods. The visual recreation is done through photographs, collages or projections inspired by the space, while the smell is recreated using conventional perfumery methods. The idea is to introduce the viewer to a world where images and smells come together to create a unique atmosphere. Sammarco and Rosset also infused materials with a scent – they could be raw, unconventional smells, like that of blood or raw cacao, or pleasant ones, such as those of flowers like magnolia and jasmine – to allow it to trigger a reaction in those in its vicinity.

While in India, Sammarco and Rosset were struck by the variety of smells they encountered. “With your eyes, you can see a limited view [when] you are in one place, [but there are] many smells mixing with one another,” said Sammarco. “It is interesting because there is not just one distinct smell but a myriad of them – both unpleasant and pleasant ones.”

Before Kannauj, the two were in Delhi, where they learnt how the historic shamama fragrance is made. Shamama attar has a unique, dense aroma, which is a mix of the smells of herbs and spices that are extracted with a water distillation technique.

Rosset and Sammarco believe that smells can be used to project art – which is usually related to seeing or hearing – and they can bring out various layers in diverse themes and subjects. “I believe that smells are a strong way in which to communicate…They are one of our basic instincts,” said Rosset. “A smell can introduce a person to something in a way that may not be obvious…With smellscapes that is what I aim to do.”

Rosset’s journey into the world of smells began when she was a teenager. She would accompany her parents, who worked in the spice business, on their work trips “We travelled a lot to see how and where these spices grew,” said Rosset, who was born in Lausanne, Switzerland. “The overarching thing I remember about these visits is their smell – and this was my very first interest.”

In 2016, Rosset decided she wanted to work with someone who made perfumes. She travelled to perfume shops in Bern and came across a scent – Bond-T, named after, and inspired by, a chocolate factory in Italy – which had “the strong animal scent of cocoa” and was so “precise and complex” that she immediately knew this was the kind of perfume she wanted to work with.

Her meeting with its creator, Sammarco, became the basis of a collaborative journey into a world that brings together art and smell.

After they discuss an idea, it is studied and then documented – visually by Rosset and through smell by Sammarco. Together, in the past, they have worked to create smells and installations that disrupt what is usually thought of as fragrance. One of them was a 20 ml bottle of perfumanti-parfum, which was “not a perfume to wear, but an olfactive self-portrait of 14 ingredients linked to interesting, funny or scary stories told by Sammarco”. There was also Dummes Holz, or blood smell – an installation in which pieces of wood were infused with the smell of blood and exhibited at the Kunsthalle in Basel, Switzerland, in 2016.

Most of the projects reflect their innovative approach to smells. Unlike commercial perfumes that are conventionally pleasant, the smells created for smellscapes are elaborations of stories or experiences of the artists or people they have met. “That’s the thing about making scents for a market – they always have to be wearable,” said Sammarco. “But when we work on smellscapes, the scent is free to be what it wants, it is not a product.”

India, say the two, is an important country in the world of fragrance: both for the prevalence of traditional techniques as well as synthetic perfuming. In their travels through the nation, their first “smellscape trip” outside Switzerland, they came across and studied diverse methods of distillation and new and old smells, which inspired them “to smell, and then re-smell” and create visual ephemera for their audience.

Sammarco believes that humans undervalue the importance of smell, and this is what keeps it from being highlighted in the world of art. There have been artists who have confronted this gap in the past. In 1938, French artist Marcel Duchamp filled the air with the smell of roasting coffee in an exhibition in Paris. Korean conceptual artist Anicka Yi is best known for her work Life is Cheap, which used olfactory landscapes and was exhibited in Guggenheim in 2017. But smell, as a concept, is still widely absent in popular discourse about art, and to push it as the predominant sense of perception in an installation is difficult to sell to curators and audiences alike.

“When we started to walk, the attention is on [what we see], so we put a lot of emphasis on our eyes,” said Sammarco. “The smell has a sense of immediacy. It is an intelligent sense, it relates more [to] instinct.”

Rosset now plans to write a book about her travels and the idea of smelling as a way of thought. She and Sammarco will also be creating smellscapes based on their experiences in the Indian subcontinent.

“When you smell something, you bring your own scent into it – thereby smelling something but at the same time changing the landscape of the smell,” said Sammarco. “I have to create ingredients and scents that give meaning to people who smell it, that introduce them to worlds or feelings previously unknown. It is a powerful thing, even if it may not be expressed widely. Smells stay in the memory and can be a lasting way in which to relate to something.”

Source: A perfumer and an artist from Switzerland are distilling smells of India into ‘smellscapes’