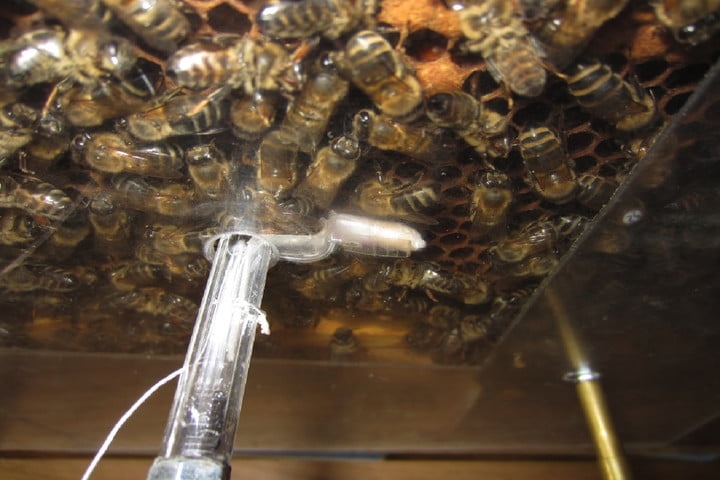 A German robot dances to communicate with honeybees

Humans use tools like Google Maps to tell us the location of our nearest restaurant or supermarket, and very soon foraging bees might get a similarly high-tech helping hand. Researchers at Germany’s Free University of Berlin have developed the RoboBee robot, which shows the best foraging locations by mimicking a dance that bees employ to relay this information to one another.

“Honeybees communicate newly found food locations to nestmates via the bee ‘waggle dance,’ a series of motion patterns they perform in the darkness of the hive,” Tim Landgraf, a professor in the Dahlem Center for Machine Learning and Robotics, told Digital Trends. “Interested bees somehow decode the dance and know how to reach the new food place. To understand this process better we have built a robot that imitates the bee dance in its various components. Essentially, the robot is a bee-sized piece of soft sponge on a stick, moved by a plotter-like positioning system. It can perform the typical waggle dance motion, beat its wings and provide drops of food samples to interested bees.”

Landgraf notes that the idea of using a robot to communicate with bees had been discussed for decades. However, the Berlin-based researchers were the first to show that bees can successfully decode the robot’s message. Not all of the bees were interested in the robot, though. “This may be due to the robot being slightly off in terms of the way it reproduces dance-related cues, or it may produce unwanted stimuli that disturb the bees,” he continued. “One cause may also that our understanding of the bee dance is incomplete. Even natural dances have only a few followers.”

The researchers next plan to use the findings in another project called BeesBook, in which bees are tracked over the course of their entire lifespan. The hope is that this will allow greater understanding of bee behavior and enable the robot to be improved accordingly.

“Right now I am not thinking about commercializing,” Landgraf said. “Beekeepers don’t need robots to tell bees to pollinate their apple trees; they just put their hives on the plantation. However, the general idea of interfacing with living systems is worth investigating deeper. With or without robots, technology may help understand animal needs better, assess health status in an automatized fashion, enrich environments, and so on.”

Source: Bust a move! A German robot dances to communicate with honeybees

Nothing is more memorable than a smell. One scent can be unexpected, momentary and fleeting, yet conjure up a childhood summer beside a lake in the mountains.