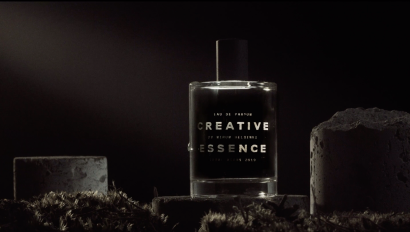 In a scheme reminiscent of the pulp classic Perfume: The Story of a Murderer, a Finnish advertising agency is using perspiration from its employees as raw material for a new perfume. Creative Essence by Mirum Helsinki’s formula includes sweat collected from staffers in the midst of a workout, a sauna treatment, or in one case, gustatory sweating caused by extra spicy chicken wings.

The scent is described as “a journey through sandy beaches with a hint of gin in the air…with notes of needles, herbs and cedar.” Lili Ermezei, the agency’s chief experience officer, tells Quartz that Creative Essence also perfumes their offices in Helsinki. “The smell is actually amazing, very fresh and delicate,” she says.

Why would anyone think of such a thing? Mirum’s gimmick, in essence, is an HR tool. Ermezei explains that the perfume is “a one-of-a-kind recruitment campaign that aims to reach creatives globally in an unconventional way.” But why sweat? “We believe sweat represents the creative passion we share as creatives. Excitement, goosebumps, the peak moments when our heartbeat rises during the visceral creative process that requires dedication and teamwork.”

Ermezei says they were aware that using bodily fluids was a controversial idea. “[It} may even shock people when they first hear about it, but it was a calculated risk we believed was worth taking since our target audience—the most creative people in the advertising industry—would be able to see behind the sweat,” she explains. “They would understand what we actually are talking about: creative talent and all the forms it can take.”

She adds that if applicants are drawn to the smell (and cheesy metaphor) it’s an indication that they might be a good fit for the agency. “Like any essence, the appeal of Creative Essence is highly personal. If your heart and mind succumb to the scent, you may be a match for our creative culture.” Promising candidates receive a vial of Creative Essence.

But seriously. The science of olfactory matching

As gross and wacky as it sounds, there is a whiff of scientific logic in Mirum’s employee selection strategy. Pairomics experts for instance suggest that compatibility is highly influenced by how much we like a person’s body odor or pheromones. New York University professor Tega Brain demonstrated this concept via a fictional platform called Smell Dating. Mirroring a 1998 Swiss experiment, Smell Dating involves choosing dates by sniffing a box full of sweaty shirts.

“Our reaction to scents is primal in nature,” Ermezei elaborates on the agency’s website. “The sense of smell requires less higher brain processing power than any other sense, bypassing rational thinking and arousing an immediate emotional response: intrigue, fascination and yes, even love. Unbeknownst to us, our olfactory system is responsible for judging our potential mates by trying to find the perfect match.” Olivia Jezler, a fragrance consultant and CEO of Future of Smell, echoes Ermezei’s observation. “None of our other senses have this direct and intimate connection to the areas of the brain that process emotion, associative learning, and memory,” she said in a 2018 interview with Quartz.

Ermezei says the unusual recruitment campaign seems to be working. “The scent and the campaign truly have resonated with fantastic creative talent from all over the world.…We have got extremely positive feedback from industry influencers and a lot of promising applicants,” she reports.

Mirum isn’t the first to turn human sweat into a bottled scent. In an interview with Quartz’s Meghan McDonough, New York-based artist Ani Lu explained how she formulates perspiration-based perfumes to bottle the memory of people she misses.

Source: A Finnish company is making perfume from its employees’ sweat — Quartz at Work

“Nothing is more memorable than a smell. One scent can be unexpected, momentary and fleeting, yet conjure up a childhood summer beside a lake in the mountains…”

“Nothing is more memorable than a smell. One scent can be unexpected, momentary and fleeting, yet conjure up a childhood summer beside a lake in the mountains…”