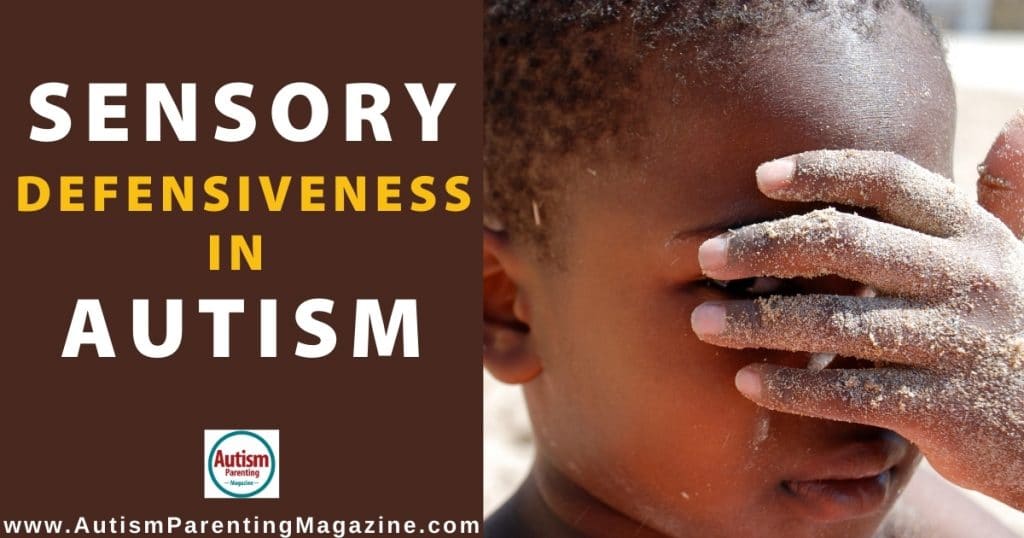 Imagine you walk into a dodgy diner…the sulphurous smell of onions hits you as you open the door, you start sweating because there is no air conditioning, and the more you sweat the worse the chaffing of your too-tight collar gets. You jump, startled as deafening music starts up suddenly, it feels like the drum beat is pulsating in your ears. You can feel your anxiety building, you start blinking in rhythm to the flickering fluorescent lights…you want to take flight, or at the very least fight the assault on your senses.

Exaggerated? Yes, but children with sensory defensiveness may want us to experience the overwhelming world they live in just once. These kids act with alarm when confronted by sensory input which seems harmless to others. Innocent or seemingly neutral stimuli will drive these children to exaggerated responses—welcome to the world of sensory defensiveness.

What is sensory defensiveness?

More specifically, one of the earliest definitions of sensory defensiveness, explains: “The tendency to react negatively or with alarm to sensory input that is generally considered harmless or non-irritating is typical of sensory defensiveness. Common symptoms may include oversensitivity to light, unexpected touch, and sudden movement, or overreaction to unstable surfaces, high-frequency noises, excessive noise or visual stimuli, and certain smells.” (Wilbarger & Wilbarger, 1991).

The world is an overwhelming place for a child whose senses react in this way to everyday or neutral stimuli. Their sensory defensiveness will cause them to react to such input with negative behavior and emotions. They may even avoid daily routines to protect (or defend) themselves and this could lead to delays in reaching developmental milestones.

Sensory defensiveness can be observed in any, or sometimes all, of the sensory systems. The child will try to defend him or herself against the offensive (or so perceived) sensory stimulus by avoiding it, minimizing exposure, or by displaying certain behaviors or emotions like irritation, frustration, or aggression.

Defensiveness in the following sensory systems is identifiable by the corresponding behavior:

Auditory defensiveness is characterized by an extreme sensitivity to sound. The child’s nervous system may interpret sounds as too loud, or the pitch may be intolerable. To deal with the discomfort, the child may act out, try and avoid or minimize the auditory input, hyper-focus on something else, or escape. The following behaviors may be observed in children with auditory defensiveness:

It is usually not difficult to spot visual defensiveness in a child; he/she will squint and get very uncomfortable in bright light, prefer to be indoors when the sun is shining, and get disorientated if an environment is visually overwhelming. For some kids, visual defensiveness manifests in the following manner:

The vestibular system contributes to balance, functions to detect head motion and position, and provides important messages and information to the brain about the location of the body in relation to its surroundings. A child with vestibular insecurity may:

Defensiveness in any or all of these sensory areas may lead to behavior of avoidance or acting out. Sensory defensiveness is misunderstood and, because it is not recognized as an official medical diagnosis, these children are often described as out of control—when in fact their brain is telling them their world is out of control and they’re merely reacting to that message!

Many published studies have confirmed the high percentage of autistic children who also have sensory difficulties and disorders. A study by Tomchek and Dunn (2007) found that 95% of the sample of children with autism spectrum disorder (ASD) showed some degree of sensory processing difficulty.

Taking the odds into consideration, your austistic child is very likely to have sensory difficulties or sensitivities and this may well be sensory defensiveness. It is very important to keep this in mind, as the knowledge may prepare parents for situations that could potentially overwhelm their children with autism.

A study by Spira and Kupietsky (2005) looked at oral defensiveness in children with dysfunctional sensory regulation. Principles discussed were applied to a dentist appointment. Going to the dentist is not a treat for many or any of us, but the details of the study gives an idea of just how traumatic it must be for a child with sensory defensiveness.

From the authors’ suggestions of how to make the child comfortable (Spira & Kupietsky, 2005) the following becomes apparent:

Imagine your autistic child dealing with the social challenges of visiting the dentist; and then add all these sensory defensiveness challenges to the appointment—no wonder the authors say the dental environment may be a “source of great difficulty for the child and parents.” Their suggestions of making the child comfortable rely on the pediatric dentist being educated about the challenges faced by a child with oral defensiveness.

Rebecca detailed the story of her son’s journey with sensory processing disorder, and along with Hannah, shared many practical tips to help children with sensory difficulties thrive.

Some of these suggestions include:

Research is only starting to change people’s perceptions about sensory difficulties. For too long many in the medical community refused to acknowledge SPD and other sensory challenges. For children with autism—who may already be fighting an uphill battle dealing with daily social and communication challenges—sensory defensiveness makes the world an overwhelming place.

Parents who educate themselves, advocate for their children, and who try to make their child’s environment just a little less scary and overwhelming, are making a huge difference. Your autistic child with sensory defensiveness is probably really tired of fighting a battle the world is oblivious to.